A Novice's Guide To Mary Katrantzou And Her Designs 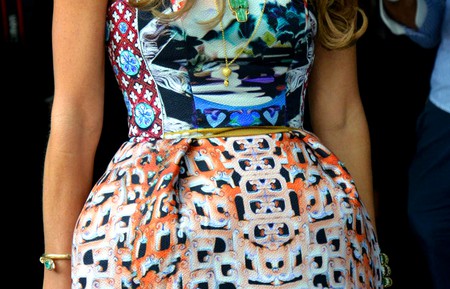 Mary Katrantzou is a London-based Greek fashion designer that emerged onto the fashion scene in 2008 and was awarded the British Fashion Award for the Best Emerging Designer in 2011. An expert in integrating bold prints into her designs, her collections are sold in more than 200 stores worldwide. She has also collaborated with world famous brands such as Adidas and Longchamp.

After studying architecture at the Rhode Island School of Design in the United States, Mary Katrantzou chose to complete her training with a BA in textile design at Central Saint Martins School in London, where she focused her research on ready-to-wear. After two seasons of working with Sophia Kokosalaki, the designer graduated with honors in 2008, after organizing a collection based on trompe l’oeil jewelry designs, a collection that established her signature style. The pieces she created had the illusion of having giant neckpieces, but she also designed real jewelry pieces out of wood and metal that replicated those prints.

After the success of her graduation show, Mary Katrantzou presented her first collection of ready-to-wear apparel at London Fashion Week in 2009, and her collection was quickly available in a couple of prestigious boutiques. The following year was also successful for the designer, as Katrantzou received the Swiss Textile Award, created a fragrance in partnership with Six Scents, and developed a jewelry collection with Swarovski. She was awarded the Best Emerging Talent in 2011 by the British Fashion Council and the Elle Style Award for Young Designer of the Year in 2012. That year was also marked by collaborations with prestigious companies such as Longchamp, Repetto, Lesage and Current/Elliott. For her spring-summer collections in 2013 and 2014, Katrantzou designed pieces inspired by vintage postage stamps and landscapes.

Her prints are constructed through digital technology, and her background in architecture proved useful as she mastered the digital construction and technicality of manufacturing in design, which has influenced her design direction with prints. Because of its strong visual component, prints have allowed her to create a distinctive visual language where color, texture, and shape are equally important. In that manner, she designs each print around the piece of clothing, and simultaneously, the clothes are designed around the print.

She is at ease not only with trompe l’oeil but also bold and bright prints, with her collections revolving around a variety of inspirations, just like her previous collections in 2013 and 2014, where she was inspired by vintage postage stamps and landscapes. But she is a multifaceted designer as her collections are perfected by a capsule jewelry line toying with the same illusion or effect.

In recent years, however, a notable change has been seen on her catwalks. Veering away from the prints that made her famous, she has been transitioning towards texture and mentions that brocade, beading, lace, and embroidery are equally as important as the prints. She explained in an interview with Vogue that the many details that were overlooked in the past with prints are now the center of focus. It is obvious that she has said everything she wanted to say with prints and is now evolving towards a new facet of her art, focusing on craftsmanship.

Another new idea she has incorporated into her designs is the use of narrative within her collection. This was strikingly visible in her spring-summer collection for 2015 when she was inspired by Pangea, the megacontinent that existed 300 million years ago, leading to the seven continents we know today, or her 2017 spring-summer collection, inspired by Ancient Greece and the Minoan Civilization – where geometry, art, and architecture found common ground.

Whatever means she uses, Katrantzou focuses on the visual language she brilliantly creates; whether she does it by print or by texture, she does it remarkably.