A History of Metaxa in 1 Minute 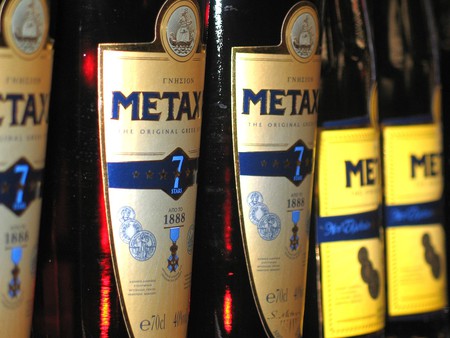 When it comes to alcohols and spirits, there is much more to Greece than ouzo or tsipouro. Another lesser-known spirit that is 100% made in Greece is metaxa, a flavorful brandy-like drink, though it goes through a much more intricate process. Want to know more about it? Read on.

Metaxa is a specialty Greek spirit invented by a silk merchant named Spyros Metaxas in 1888. Marketed all around the world since then, this drink is often mistaken for a brandy, though it is actually a bit more complex than that.

Starting off as a brandy, metaxa is produced from locally produced Savatiano, Sultanina and Black Corinth grapes, then distilled twice to be sweetened later on with aged muscat wines from Leros and Samos and then blended with a secret botanical mix. At this stage, it is aged in hand-made oak barrels. Marketed as ‘the smoothest amber spirit under the sun’, metaxa is very flavorful, with a touch of sweetness and citrus notes.

On the market, you can find it in three versions: three-, five- or seven-star, with each star representing the number of years that it has been aged in the oak casks. Nowadays, metaxa is sold all around the world, and the small, family-run business is one of the two Greek companies which survived both world wars. After its establishment in 1888 in Piraeus, the company quickly expanded and opened factories in Istanbul, Turkey and Odessa, Ukraine and, in 1900, metaxa made its first appearance on American markets.

Metaxa was actually sold as Cognac until 1937, when French producers restricted the appellation ‘Cognac’ to brandies made of specific grapes and using a specified distillation process. Another blow came when the definition of ‘brandy’ was altered to exclude spirits containing anything other than wine distillates.

After Spyros Metaxas’ death, his sons took over the business and expanded it; in 1968, the metaxa factory relocated to Kifissia, a northern suburb of Athens, where it still stands today. The company was then sold to British-owned Grand Metropolitan (now Diageo) and eventually was bought by mega-corporation Rémy Cointreau; despite now being foreign-owned, today it is one of the most successful alcoholic beverage companies in Greece.

Want to try your hand at creating a metaxa-based cocktail? Head to the Metaxa website and see if you can replicate some of their recipes.