A Guide to Sailing in the Sporades Islands, Greece 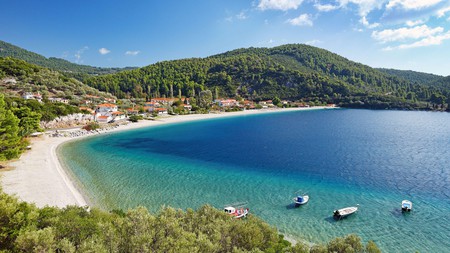 Located in the northwest Aegean, the pine-clad Sporades islands resemble a collection of priceless emerald jewels scattered (hence “sporadic”) across serene aquamarine seas. Skiathos, Skopelos, Alonissos and Skyros are the region’s four main islands, while there are around 20 smaller, uninhabited islets and countless placid bays to drop anchor in if you’re approaching the islands by boat. Weather conditions are mostly gentle, making it ideal for a relaxed family sailing holiday. Fans of Mamma Mia! will recognise Skopelos’s Kastani beach, featured in the original film.

Sail around the Sporades Islands in style by chartering a vessel with SamBoat. Alternatively, embark on a multi-day sailing adventure with Dream Yacht Charter.

Take a walk through the flagstone streets of Skopelos Town, also known as Chora, built around the base of a Byzantine castle. Pick up a handcrafted miniature boat or delicately-painted plate to take home. 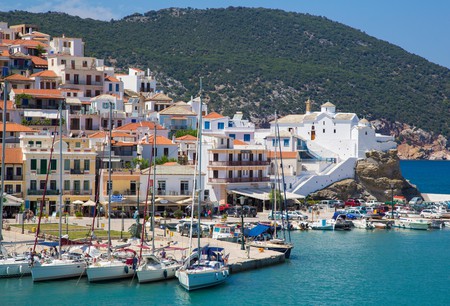 Less-developed Alonissos still retains an air of wildness. Hike its well-marked trails through pine and cedar forests and gather wild herbs to season your next on-board meal. In the national marine park you’re unlikely to spot its shyest resident, the endangered Mediterranean monk seal, but you may see striped dolphins and Eleonora’s falcons.

On Skyros, pay a visit to the archaeological museum, where you can admire an example of a traditional island home, replete with intricate hand-carved Skyrian furniture.

Skyros’s Linaria Marina may appear minuscule but it is one of the Aegean’s best-organised public marinas. Run by university students, the Blue Flag marina (VHF channel 9; +30 6972 002020) can host a maximum of 50 vessels up to 50m (164ft) and offers mooring lines, water, electricity, toilets, showers, free wifi and a laundry. Laid-back Linaria has a handful of tavernas, cafe-bars and boutiques. Head up to Kavos Lounge Cafe – with tiered terraces set into a sea-facing cliff – for breakfast or sundowner cocktails. 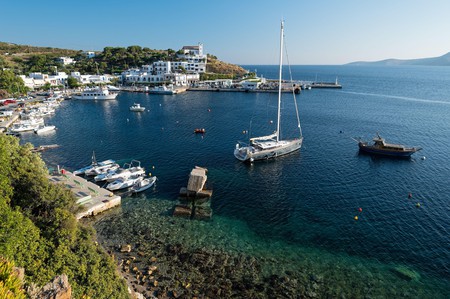 On Skopelos’s southwestern coast, drop anchor at Limnonari Beach, take lines ashore and dip into brilliant blue-green waters. Sheltered from all winds but southerlies, it’s a wonderful spot to overnight.

On Skiathos, dine al fresco at the Windmill restaurant, perched high above the main town with views of the Aegean and nearby islands. Tables are set around a late-19th-century windmill and the menu features novel takes on classic Greek and Mediterranean dishes. Wind down with an exotic cocktail or two at hip GinFish, at the old port. 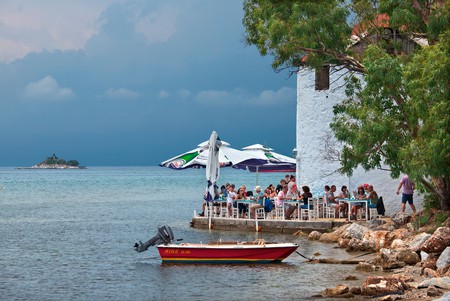 You have some options in Skopelos. Though, Skiathos has a considerable number of charter yachts available, so it makes sense to start your journey from there. SamBoat has a good selection of sailing yachts and catamarans available for bareboat or skippered charter, catering for up to 12 guests.

Note that to skipper a sailing yacht in Greece, you are required to present a sailing licence, certificate from a recognised sailing association or an International Certificate of Competence.

Skiathos and Skopelos have multiple supermarkets and minimarkets in close proximity to their ports, whereas there are fewer on Skyros and Alonissos. At all ports, seek out farmer’s markets or grocers to stock up on fresh fish, fruit, vegetables and island herbs. Butchers are your best bet for quality meat.

The week-long Aegean Regatta and Evia Island Regatta, occasionally call in on Skyros, too. 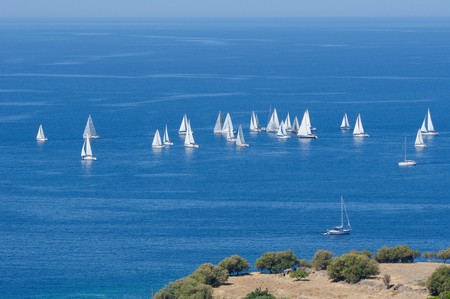 The Aegean Regatta was founded in 2001 | © Nature Picture Library / Alamy

The Sporades’ sailing season runs from April to October, with warm, sunny days and temperatures ranging from 20 to 30°C (68 to 86°F). Novice sailors should consider scheduling a trip for April, May, September or October, when light winds of between Force 3 and 5 steadily blow through. In summer, winds can reach Force 7. 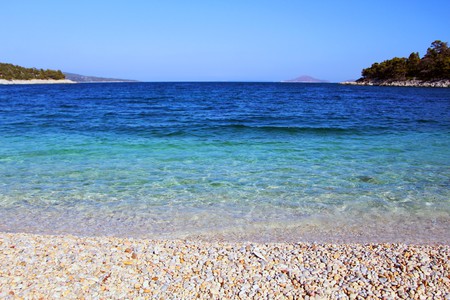 Skiathos has good connections, with direct flights to its international airport from London, Paris, Munich, and a number of other European cities, mainly from June through to October. Alternatively, fly into Athens and take one of the numerous domestic flights to Skiathos. A taxi transfer between the airport and port takes a mere five minutes.

See all the Sporades Islands’ have to offer by chartering a boat with SamBoat or sail away on a multi-day adventure around the region with Dream Yacht Charter.