A Guide To Greece's Beaches: Sandy and Pebbly 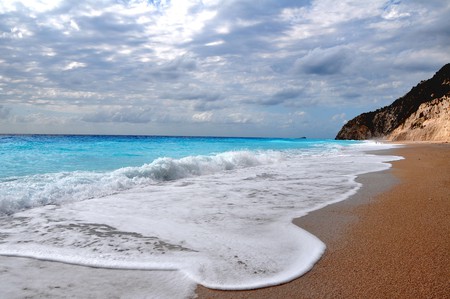 View of a Greek beach | © Shogun/PixaBay

As a vacation destination for travellers from far and wide, Greece is world-renowned for its beautiful beaches and clear waters. Every year countless tourists make the journey here to enjoy them, though many are indeed pebbled. Whether you prefer sandy or pebbled terrain, Greek beaches never fail to charm even the most discerning traveller. Let us guide you through a small selection of the best sandy and pebbly beaches in Greece.

Located at the end of the second leg of Chalkidiki, Sithonia, Sarti is a long, unspoiled sandy beach. Encircled by pine trees, this summer-tourist haven boasts of limpid emerald waters, making it an ideal location for swimming and sunbathing. 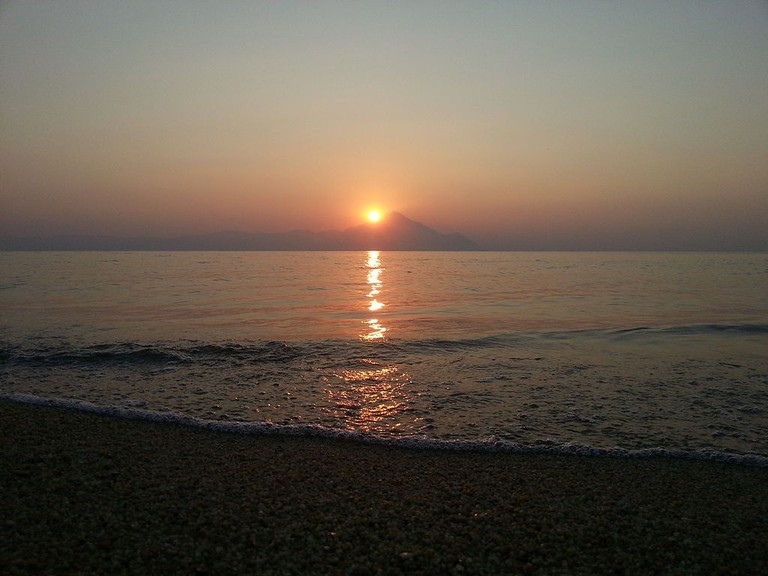 The town of Kakovatos is located on the Gulf of Kyparissia and offers direct access to the 26 km-long beach of Kakovatos. The endless coastline of gold sand and the calm waters of the Ionian sea are some of the highlights of this mainland beach. Even better, despite its popularity beach-goers are never packed like sardines during the high season, as there are many secluded spots for a few moments or hours of privacy and peace. This highly underrated and excellent beach is an ideal option for those looking to escape the crowded islands. For an optimal view over the Kakovatos from your room, stay at Ostria Hotel Kakovatos. 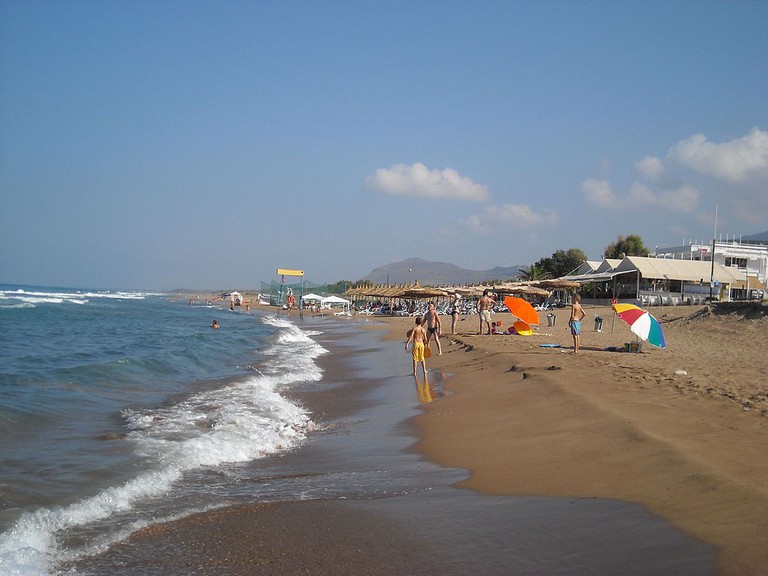 A swim at Voutoumi beach will make you feel as if you’re in a tropical heaven. With its bright turquoise waters, white sand and verdant hills, this impressive beach on the unassuming island of Antipaxos is a marvelous sight for wanderers. After your swim, head to the nearest tavern and quench your thirst with ouzo whilst savouring some grilled fish. 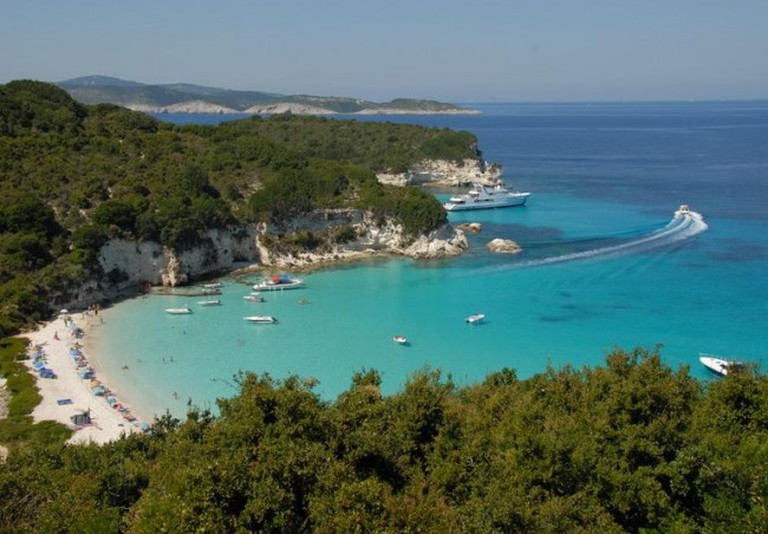 Soft shimmering sand and magnificent turquoise waters are what make Megalos Simos — also known as Sarakinikos — a must-see sight in Greece. The tiny island of Elafonisos, located off the south end of Peloponnese, is also host to other beaches, but Sarakiniko is definitely the best. 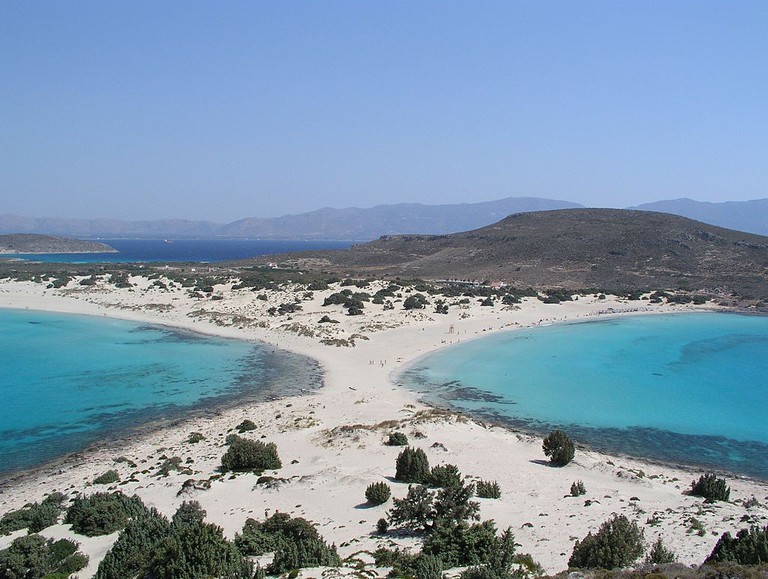 This other mainland beach is surrounded by abundant green vegetation, white sand and crystal clear water. As it is quite a long beach, make sure to venture 10 minutes away from the town of Agios Giannis to reach its end. There you can enjoy an incredible beach day in this tiny paradise. 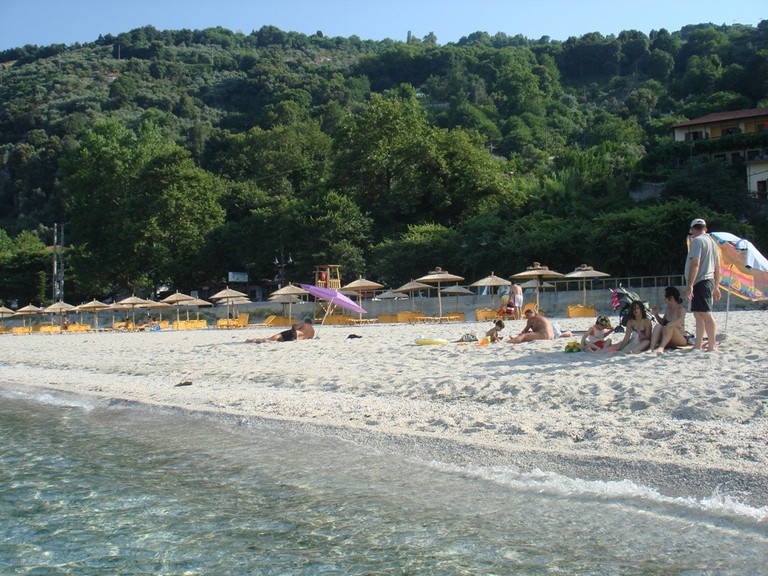 The beautiful, secluded beach of Vagies is also known as Anthony Quinn beach, as it gained popularity after its ‘star’ turn in the film The Guns of Navarone. Despite its hollywood status, however, this beach is one of the calmest spots on the island. Though it is narrow, its rocky, pebbly expanse features patches of sand from which you can admire the impressive surrounding scenery. Though the island is not particularly convenient for visitors, the nearby Faliraki is only 3 km away and has a plethora of services available. 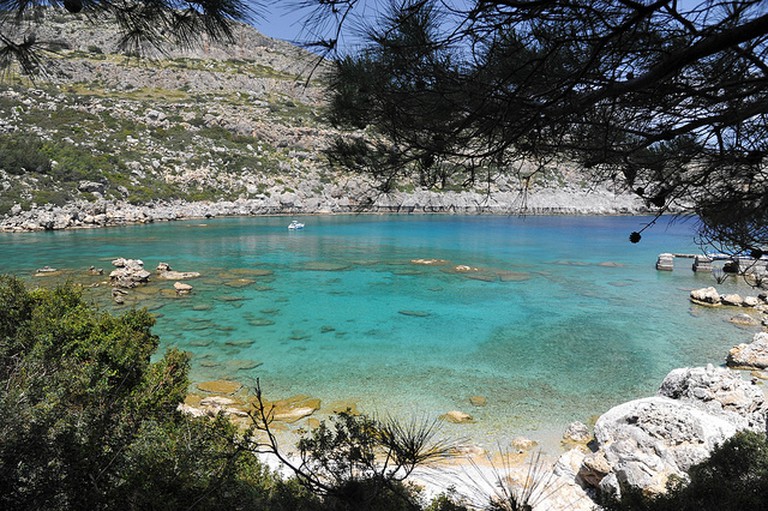 Located only an hour away from the capital, Agistri is an excellent getaway from Athens. Despite its small size, the island still boasts of picturesque beaches surrounded by lush pine forests. Chalikiada is one of them. At the end of a narrow path close to Skliri, you get to admire a fantastic view of the beach, with its large pebbles and limpid waters. The location is an equally beautiful spot for camping. 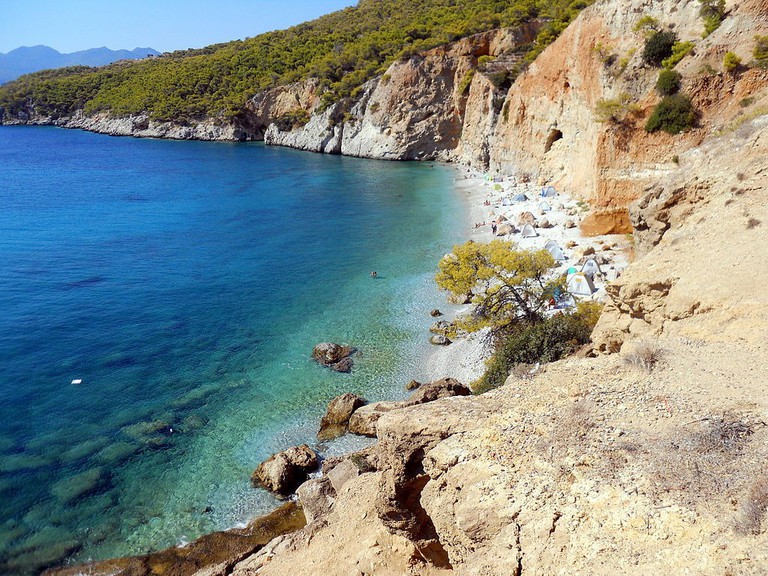 Myrtos is an old favourite for nationals and tourists alike, and for good reason. With its crystal-clear water and white pebbles, the view over Myrtos at the foot of steep cliffs in the western part of Kefalonia is simply breath-taking. And for all the cinephiles out there, the beach served as a filming location in the movie Captain Corelli’s Mandolin. 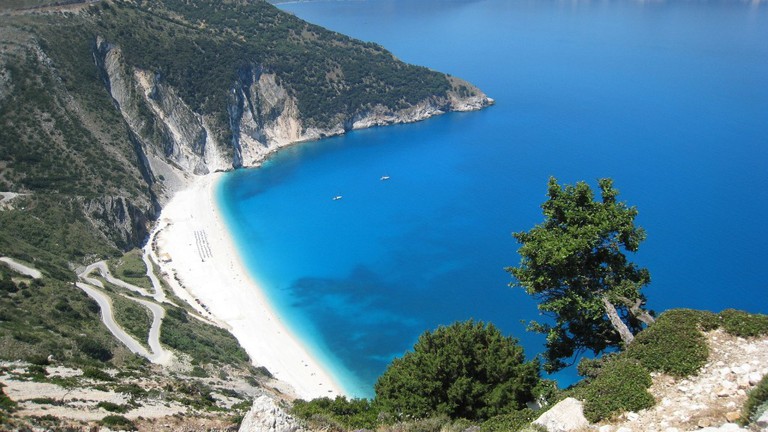 Kerveli is a secluded beach 7 km away from Samos’ capital, Vathy. With its clear waters and white pebbles, Kerveli lies discreetly at the bottom of the hill. The calm waters and tall pine trees nearby bring a sense of peaceful seclusion to this splendid beach. And though access to Kerveli is simple and easy, it is never crowded as it is not well-advertised. Perfect for a tranquil day lounging under an umbrella. 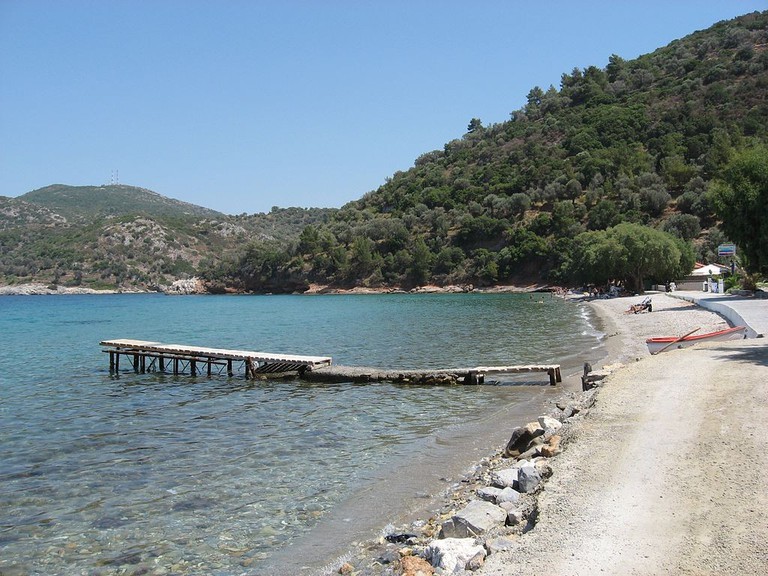 Beautiful Kythira is a small green paradise located opposite the southeastern tip of the Peloponnese. Located 15 km away from Chora, the main town, Kaladi is a pebbled beach with an enchanting rocky landscape. The cove is surrounded by magnificent caves, which makes it a popular destination among young people, who enjoy jumping from the rocks. But don’t stop there; the whole island deserves a visit, and visitors are certain to fall in love with it. 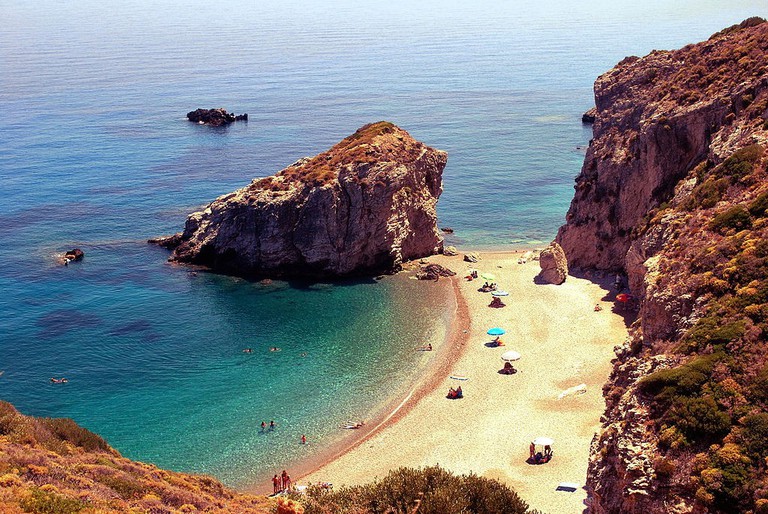