A Brief History of the Evzones, Greece's Presidential Guard

Even if you have never been to Athens, you may be familiar with the men standing guard day and night in front of the Tomb of the Unknown Soldier on Syntagma Square. Keep reading to learn more about the Evzones, the presidential guard of Greece.

The sight of skirt-wearing soldiers standing motionless in front of the Parliament on Syntagma Square is a scene that you can admire day and night. The Evzones, or Presidential Guard, have been on duty since 1868. And while they perform other duties such as raising and lowering the flag on top of the rock of the Acropolis, these real-life Greek statues are mostly known for their uniforms, which includes a skirt-like garment (fustanella) and a pair of tsarouhia – red leather clogs with black pompoms. But there is more to these men than their unique uniforms. 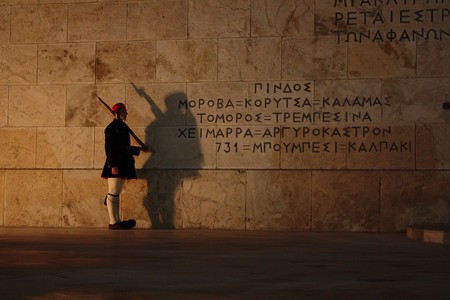 The Evzones, colloquially called tsoliades, are usually selected from the Greek special army forces and must also meet the height requirement set at 1.87 metres (6.1 feet). The history of this special unit stretches over more than a century. Founded in December 1868 as a combatant and ceremonial force, the Evzones unit was primarily a ceremonial role, gradually taking over other duties as time passed. It was only in 1974 that their group took the name of Presidential Guard, after the restoration of democracy.

Evzones was also a term used to define several figures of the country’s mountain infantry who fought in the Balkan Wars as well as during World War II. Today, their barracks are still located at the same location, close to the Presidential Palace. 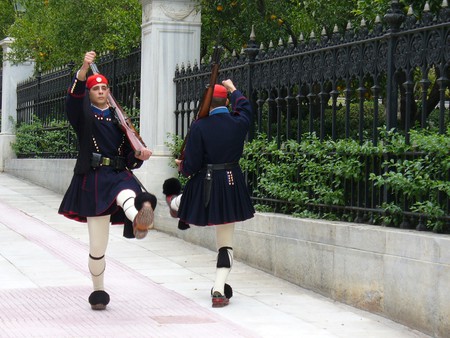 To be part of this elite unit, a junior Evzone has to undergo intense training; he needs to learn how to stand for several hours in a row, avoid eye contact, stare at an imaginary point without flinching or blinking his eyes and lift his leg up to shoulder height. 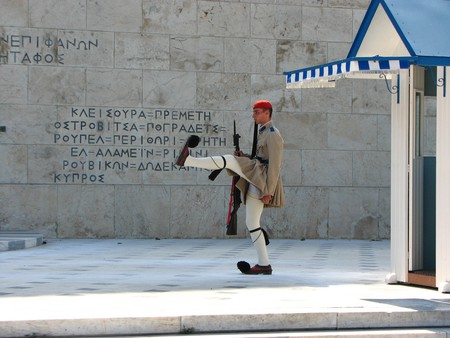 An Evzone lifts his leg up to shoulder height | © fdecomite / Flickr

The Evzones’ duties include always standing guard in front of the Tomb of the Unknown Soldier on Syntagma Square; even if it snows or rains or if there are riots, they will be there. Thankfully, a soldier on duty is there to watch over them, provide them with a winter cap if it gets chilly, give them water during the hot, summer days and wipe off the sweat. He is also there to make sure tourists do not get too close to the Evzones or disrupt their watch. The other honorary duty is to raise and lower the flag on the Acropolis. As such, on Sundays and every national holiday, you can see them riding a coach all the way to the entrance of the archaeological site; however, they ride standing up so that they don’t crease their uniforms. They then proceed to walk up to the Parthenon where they line up in silence in front of the Erechteion. 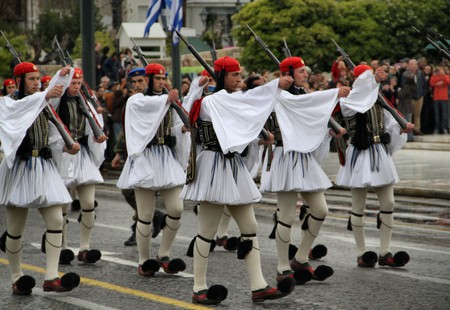