A Brief History Of The Amalia Dress 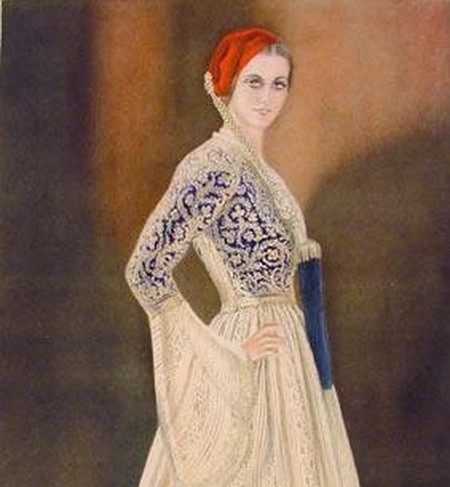 The Amalia dress is a Greek traditional folk costume created by Queen Amalia, who ruled as wife of King Otto from 1837 until their expulsion following an uprising in Athens in 1862. The outfit is the result of an attempt to establish a unifying symbol of Greek identity. Read on for a brief history of the Amalia costume and its historical significance in the fashion culture of Greece.

The young modern Greece, established on February 3, 1830 by virtue of the Protocol of Independence, was in need of its own identity after being under Ottoman rule for roughly 400 years. As such, the newly appointed royal couple of German descent – King Otto and Queen Amalia – accepted the complicated task of reigning over the new country with gusto when they arrived in the Greek capital (then located in Nafplio) dressed in traditional costumes. The king proudly wore the fustanella while the Queen wore a romantic folksy dress, influenced by Western European fashion and combining details from Greek traditional costume. For them, the creation of a national attire was necessary to ensure and create a unified identity. 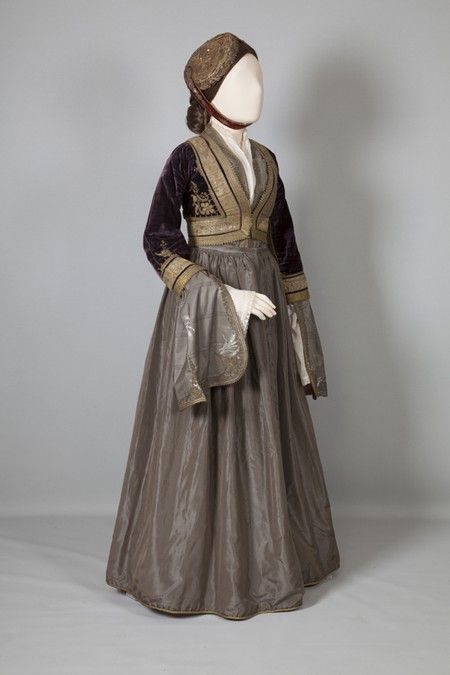 Amalia wore the dress on formal occasions (though she preferred wearing the latest Parisian fashions in her day-to-day life) and requested that her female court wear it as well. The costume includes a long dress – called foustani or kavadi – inspired by the Biedermeier style, a central European silhouette popular in Germany and the surrounding countries, with a bodice based on the model of the Greek traditional kavadi (a local long-sleeved dress). The dress was open to the front to reveal an embroidered chemise. The kontogouni or zipouni is the short, tight-fitting velvet jacket worn over the foustani. It was usually embroidered with intricate gold patterns. The ensemble ends with a final flourish – the red fez always adorned with a tassel of braided gold threads. 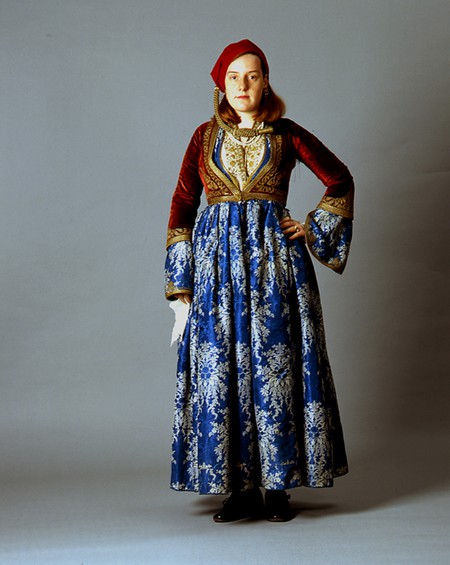 Today, the Amalia dress is no longer considered a symbol of identity of the Greek nation, though the fustanella endures in the uniform of the Presidential Guard. However, on various occasions, such as Greek national days (particularly October 28th and March 25th), young girls sometimes amuse themselves by wearing lower-quality Amalia dresses for Carnival or dress-up parties. 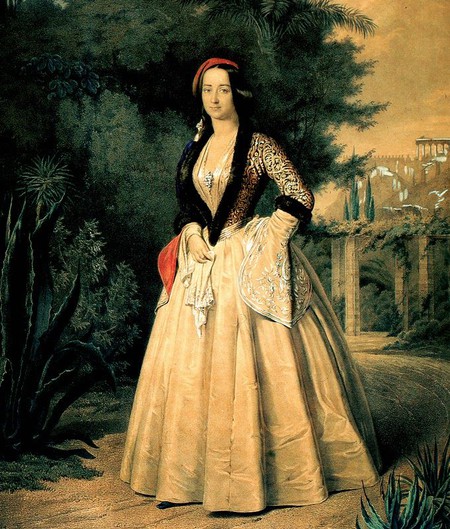