A Brief History Of Mount Athos 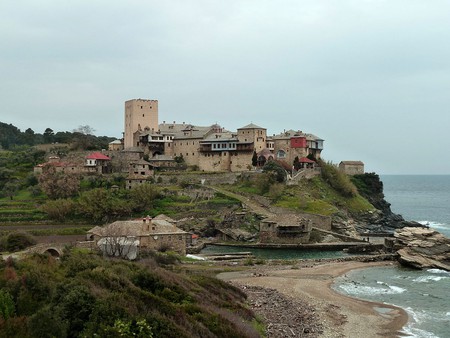 An epicenter of Eastern Orthodox monasticism and home to 20 monasteries, Mount Athos, also known to Greeks as the Holy Mountain, is located on the eponymous peninsula in northern Greece. This sacred area still holds a certain aura of mystery for many Greeks and foreigners. Read the following historical account of this holy place, learning about both its past and present.

According to mythology, Athos was a Thracian giant who, during the battle of the Gods and the Giants, threw a huge rock on the God of the Sea, Poseidon. The rock, which slipped from his fingers and fell into the sea, created a piece of land, now known as Mount Athos. However, another mythological account places the origin of the name with god Apollo, who fell in love with Daphne, the Arcadian king’s daughter. In an attempt to resist temptation and to maintain her virginity, the young woman fled to the main port of Mt. Athos to find refuge, therefore, giving her name to the area – the port is now known as Daphne.

The 4th century saw the Christianization of the peninsula, and by the 5th century, monks began to inhabit Mount Athos – they found this deserted place ideal to worship their God in peace. An Early Christian tradition states that while on their way to visit Lazarus in Cyprus, the Virgin Mary and John the Evangelist found refuge on the peninsula after being caught in a storm while at sea. Therefore, the area is also known as the garden of the Virgin Mary.

By the end of the 9th century, there were small communities of hermits and monks living frugally throughout Athos. Two notable monks were Peter (or Petros) the Athonite and Euthymios the New of Thessaloniki. However, historians believe that the founder of organized monastic life was Athanasios the Athonite, who established the monastery of Great Lavra.

Born in Trebizond, Athanasios lived his entire life in Asia Minor before settling at the Holy Mountain. Because of his reputation, numerous monks who had a desire to live an ascetic life arrived, and many new monasteries were built. But not everyone was in favor of these monastic communities, and many complained to the emperor of the time, John I Tzimiskes, who responded with an edict called the Tragos, an imperial chrysobull which gave support to Athanasios’ work. Later, in the 11th and 12th centuries, Mount Athos became an important monastic center in the Byzantine Empire, with even more monasteries constructed. 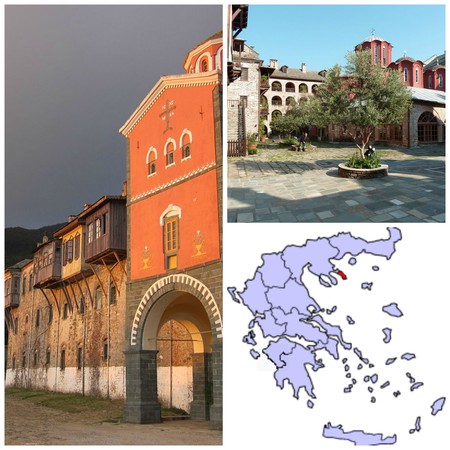 After the brief occupation by the Franks, the Ottoman Empire arrived and quickly imposed taxes and tithes on the monks. With the economic burden steadily growing, the monks deserted the monasteries; however, a few remained. For many centuries, Mount Athos was only a shadow of its former self. But the greatest tragedy was yet to come. In 1822, after thousands of women and children came to find refuge in the area, Turkish armies proceeded to kill the monks, women, and children; looted any treasure they found; and burned valuable manuscripts.

Then, with the end of the War of Independence, peace returned to Athos, and so did the monks, though many of them came from neighboring countries, with only a handful of Greeks among them.

When Ottoman rule ended in 1912, Athos had approximately 10,000 monks; however, the area was once again deserted. Around the 1970s, Mount Athos experienced a revival once more, attracting younger generations.

Today, Mount Athos is a self-governing area where visits are restricted – a special entrance permit is required – and it’s only open to males who have chosen to live a life of celibacy. Even though a few women have attempted to enter the peninsula, some more successfully than others, and a 2003 resolution by the European Parliament requested to lift the ban, it is still not possible for women to see the Virgin Mary’s Garden, for now. Let’s hope this rule changes in the near future.