In Greece, it’s not uncommon to see busy workers running to their workplace with a koulouri (a sesame bread crown) and a cup of frappe in hand. This street food-cum-breakfast is part of the Greek ritual for eating on the go, and it can be bought plain or stuffed with La Vache Qui Rit cheese or Merenda (the Greek version of Nutella). Here is a brief history of the koulouri, Greece’s ultimate breakfast on the go.

Some historians trace koulouri’s origins back to antiquity – taken from the ancient kollyra, a type of round bread served to the slaves – and to the origin of street food. For thousands of years, street food was a way of providing the population with cheap food options. For example, during the Byzantine Empire, it is said that the streets of Constantinople (modern-day Istanbul) were filled with street food vendors selling a variety of items to locals and travelers. One food still common today in Greece and Turkey is the koulouri (or simit in Turkish), a ring of bread sprinkled with sesame seeds. And though Thessaloniki seems to be credited as its birthplace, it can now be found throughout the country, enjoyed by people of all ages as a snack or a quick breakfast. 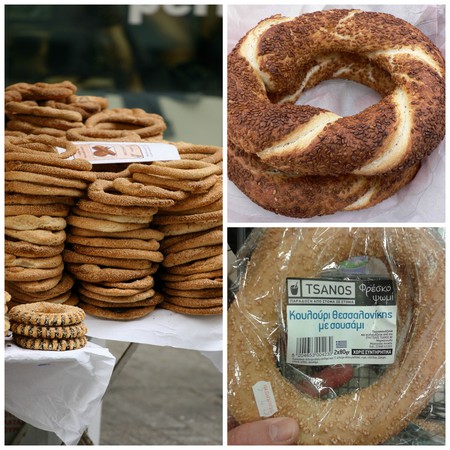 Available in many variations (multigrain, filled with chocolate spread, cheese or tahini or even without sesame seeds), the traditional sesame-seed koulouri was first introduced by Greek refugees from Asia Minor who were flooding Greece’s second city. Koulouria (plural of koulouri) were sold early in the morning by street vendors – who had baskets (tavades) precariously resting on their heads – located in highly frequented areas.

This healthy snack, packed with carbohydrates and proteins, is virtually sold everywhere, in bakeries or on the streets. And while it’s usually in a simple ring form, you may also find it twisted or braided. And do not mistake them for bagels – koulouria are not boiled and typically have a crunch when you bite into them. If you want to taste one, it is best enjoyed fresh (buy it only in the morning) as it quickly turns hard after a few hours of exposure to the air. Fair warning, though: you may soon become addicted.