9 Emerging Greek Artists to Watch Out for This Year 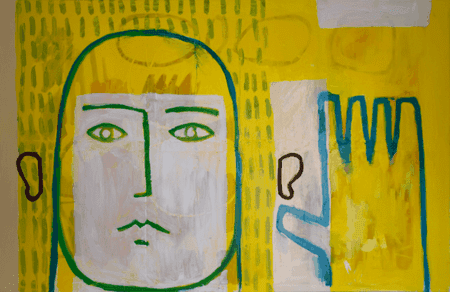 Radical, engaged, provocative and playful, there’s a host of new Greek artists emerging on the international stage. Acknowledging and responding to the crisis, yet offering a world beyond these immediate circumstances, these visual artists are need-to-know names for the year ahead. Read our round-up of the emerging Greek artists to watch out for this year.

Chrysanthi Koumianaki is an Athens-based artist with a strong graphic language that manifests itself across sculpture, installation, ink drawing and painting. Her works are architecturally reacting and moulding the space she exhibits, regardless of the form these exhibits take. They range from bright, geometric sculptures to paintings that distill the world around her into a new code full of symbols and shapes. Cultural history also plays a strong role, with artifacts and objects being repurposed and re-imagined in spaces that deny the object’s previous role: thousands of calendar pages displayed on a wall, the process of producing a banknote without the finished product or catalogues for pots and pans presented in an exhibition space.

Founded in 2011, Arbit City Group is an art collective concerned with public space and ideas around community, specifically the collective unconscious. Often, they consider themes of power within this arena, referencing, among other things, the great rivalry between the Onassis and Niarchos families and how that has manifested in Greek cultural life and cultural spaces. Working with mixed media that ranges from sculpture to neon lights and painting, Arbit City Group is playful and mischievous, ready to re-imagine the expected and turn what you thought you knew upside down. Be careful where you tread.

Born in Thessaloniki and currently based in Athens, Stratis Tavlaridis is a visual artist who creates works from perforated paper to make installations. Creating strong, geometric patterns and designs, Tavlaridis has exhibited widely in Greece and has been recognized internationally for his work. His work is delicate, imagining established silhouettes such as shirts and underwear in intricate, detailed patterns. Through these contrasts, the viewer is asked to reposition their relationship with the everyday and continually takes the viewer by surprise.

With a background in illustration, emerging Greek artist Aristeidis Lappas brings a powerful sense of narrative to his bright, immersive paintings. His works are based on his personal experience, with the canvas used as a space to explore ideas as well as reflect back to an interpretation of the world he experiences. From cigarette butts and slogans to theatrical plant pots and broken hearts, Lappas’ canvases are expansive and spacious, leaving ample room for the viewer to roam around in the world he presents.

Created by Ioannis Koliopoulos and Paola Palavidi, Hypercomf is a company (the word here applied in a looser and more playful context than in the commercial world) specializing in wearable art. The duo focus on functionality within the genre of art, investigating the use and value of objects and how they can engender feelings of alienation, discomfort and communality in any given space.

A graduate of the Tisch School of the Arts in New York, Lilia Ziamou is a Greek-born artist now based in New York. Her work considers the idea of boundaries, imagining what happens when limitations are explored or ignored. Working mainly across digital compositions and sculptures, her final works bend reality and blur the expected into new and disconcerting forms, presenting a contemplation of beauty and decay within this new framework.

A graduate of London’s Central Saint Martins, Amalia Vekri is an Athens-based painter and sculptor. Her works consider the world from a surreal and often dystopian perspective, entwining myth and reality to offer modern versions of Hades’ underworld – and those you might encounter on your journey into it. Recent sculptures offered plumes of clay emerging from fix bottles, with dolphins and cherubs perched on top. Paintings such as Man with Pizza and Inferno (Talking About the Weather) frame the contemporary world within a mythical context.

With a strong cubist aesthetic, Efthimis Malafouris’ paintings are powerful and emotive, using geometric forms to convey fluid, transcendent feelings. Minimalist yet hugely evocative, his first solo exhibition in Athens garnered huge hype when it opened in February 2018 and deservedly so. In depicting portraits of modern individuals while referencing and evolving a historical tradition, Malafouris asks viewers to re-examine their present, sweeping the vast complexity of the human condition – the tragedy and isolation, the joy and tenderness – into one vivid body.

Having studied graphic design at Vakalo College in Athens and typography at Central Saint Martins in London, visual artist Sofia Sevi brings a preoccupation with dichotomies to her work. Contemplating the relationship and space between waking and dreaming, her mixed-media works to combine paintings and drawings on large canvases and she also works on sculptures and installations. Throughout her fluid lines and use of powerful, strong shades, she offers scenes that are both playful and emotional, abstracted from a straight reflection of everyday life, yet with a powerful human resonance.