8 Reasons Why You Should Visit Lemnos Island, Greece 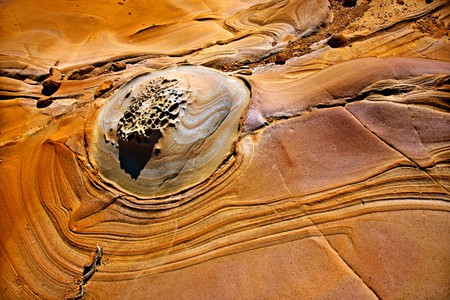 Located in the northeastern Aegean Sea, Lemnos (or Limnos) is an incredible island situated between Lesvos and Thassos. Thanks to its large distance from Athens, the island has been spared from mass tourism and is definitely one of Greece’s best-kept secret. Even in peak season, its large sandy beaches remain uncrowded. Worth visiting all year round, Lemnos is known as the homeland of the Amazons and home of God Hephaestus. But there is so much to see and do. Here are eight reasons why you should give this island a chance.

Stretched between two bays; Myrina is divided into two districts, Romeikos Gailos, a conservation area with various neoclassical buildings, bars and restaurants, and Tourkikos Gialos, with a little marina lined with quaint fish tavernas. Between the two bays lies an impressive medieval castle worth visiting. 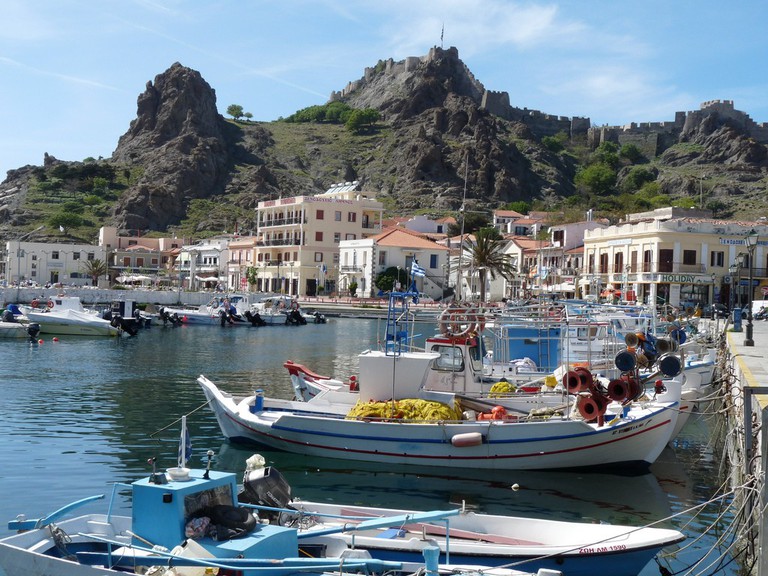 View of Myrina and the castle | © Michael Clarke Stuff/Flickr

Explore the Byzantine Castle of Myrina

Positioned on the highest peak in Myrina, the Castle of Myrina was commisioned by Byzantine emperor, Komnenos. The invading power at the time, the Venetians, continued the construction in the 13th century. Climbing up to the top may be a bit straining, but you will certainly be rewarded by the fantastic view over the bays and the sea. Within the castle, visitors can admire the ruins of a Turkish mosque and of a few houses, but they may be lucky enough to spot a herd of deer. When you are done exploring the fortress, make your way to the picturesque Nefeli for a refreshing break. 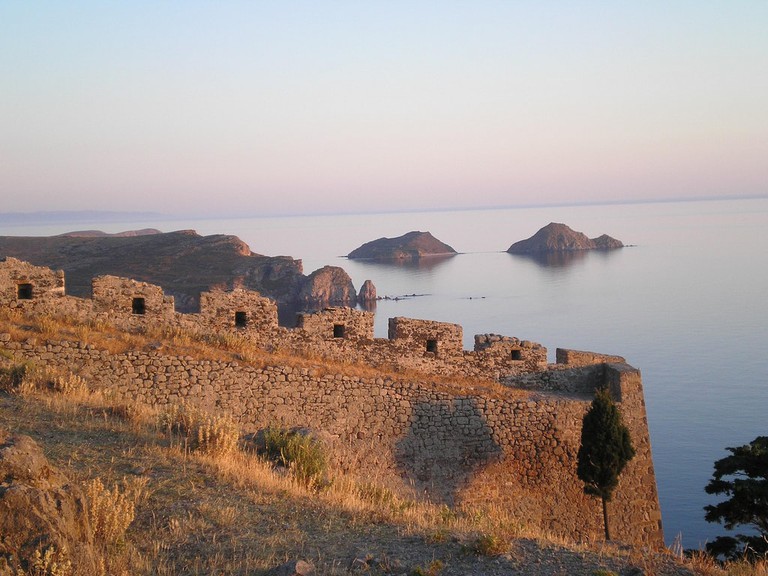 Visit the Church of Panagia Kakaviotissa 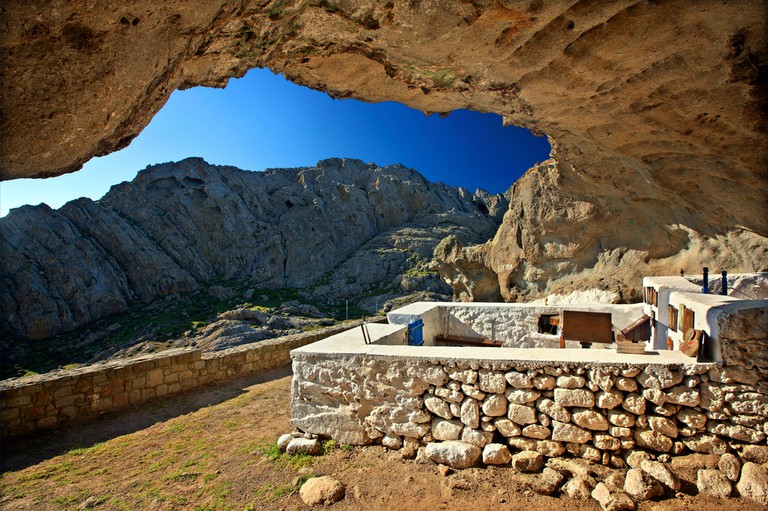 The "cave church" of Panagia Kakaviotissa, Lemnos (Limnos) island, North Aegean, Greece | © Heracles Kritikos/Shutterstock
The chapel of Panagia Kakaviotissa will undeniably take your breath away. This little chapel, located near the village of Thanos, is nestled inside a rock cavity by the peak of Kakavos Mountain. Founded in 1416, the church was used as a shelter for monks and hermits. This small hidden gem, reachable after a 20-minute walk on a dirt road, boasts impressive vistas of the sea and the mountainside of the island. Make sure to visit in the late afternoon to catch a glimpse of the chapel flooded by natural light.
Open In Google Maps
Myrina, 814 00, Greece
Give us feedback

You won’t have a hard time finding accommodation in Lemnos, but if you want to switch up your habits and give glamping a try, then your best bet is Keros beach. One of the island’s most popular beaches, ideal for wind sports, Keros is home to a kitesurfing and surfing centre where luxury safari tents and bungalows are available for rent. Sleep close to nature without sacrificing comfort and wake up to one of the best views on the island. 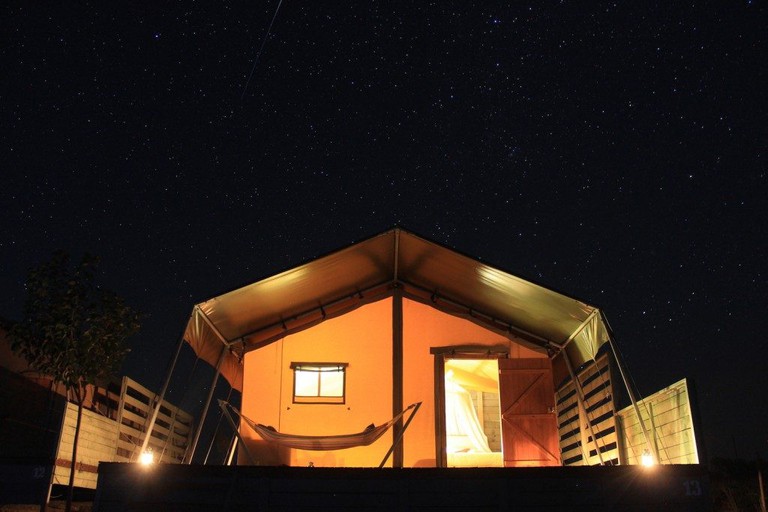 It may be an under-the-radar destination, but Lemnos certainly has nothing to envy in terms of its more popular neighbours. Ideal for wind, kitesurfing and surfing, Lemnos enjoys steady winds over the summer. Surf Club Keros provides courses and renting equipment for anyone interested, whether you are a beginner or an advanced enthusiast. Lessons are held in Keros, but also in Gomati and Zematas beaches, depending on the weather conditions. If you ever wanted to give it a try, now is your chance. 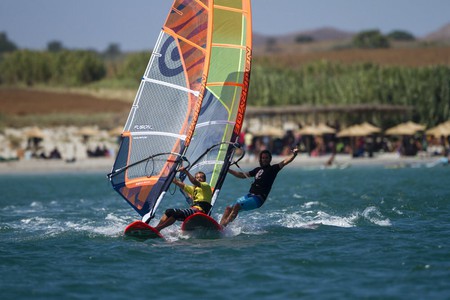 Visit one of the archaeological sites on Lemnos

Situated near Kontopouli, the ancient site of Ifestia (or Hephaistia) is located in the north of Lemnos and was founded by the Pelasgians. The second largest town of the island during Antiquity, it used to be an important religious centre until early Christianity. Visitors can admire a cemetery, ancient baths, a Hellenistic theatre and the remnants of a palace. The ruins of a sanctuary devoted to the Great Goddess can be seen, proving the religious importance of the site. 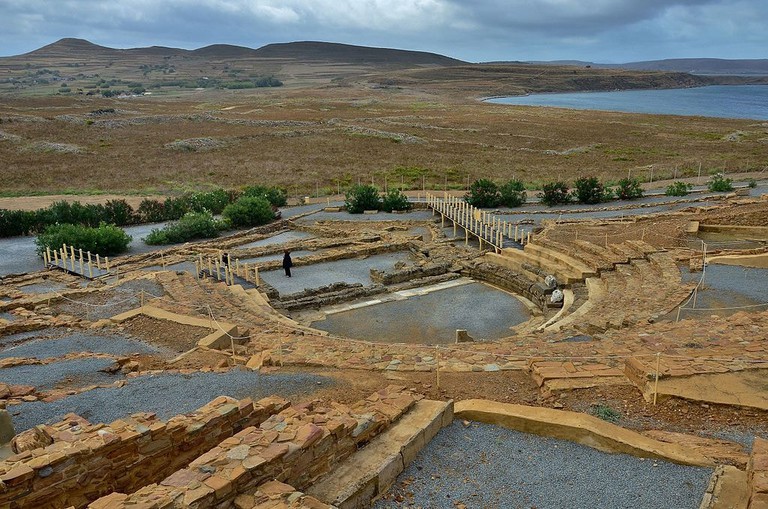 Pop by the Archaeological Museum

Museum
Facebook
Email
Twitter
Pinterest
Copy link
Share
Map View
Myrina is home to a fine neoclassical mansion housing the archaeological museum, in Romeikos Gialos. Here, you will learn the history of the island, from the copper era (Neolithic period) to the medieval times. Collections include finds from the island’s major sites: Poliochni, Kabeiroi, Imbros and Hephaistia, such as ancient craters, statuettes of sirens as well as archives from the population exchange of 1923.
Open In Google Maps
Navarchou Kountourioti, Mirina, 814 00, Greece
Visit Website
Give us feedback

Lemnos boasts unique ecosystems, from rugged landscapes, cascading waterfalls, sea caves and spectacular beaches. But in the middle of the island, visitors will be amazed to discover that the island is home to a sandy desert, near Katalakkos. Created by natural erosion, Pachies Ammoudies, as the area is called, is home to sand-friendly vegetation and is best visited in the late afternoon, to avoid strong sunrays. Another magnificent natural wonder on the island is the rock formations in Falakro, in the northern part of the island, near the village of Propouli. Created by crystallized lava millions of years ago, these unique geological formations contrast with the turquoise waters of the Cape, making it a spectacular sight to behold. Get your camera ready and admire the yellow frozen lava forming impressive shapes along the coastline. 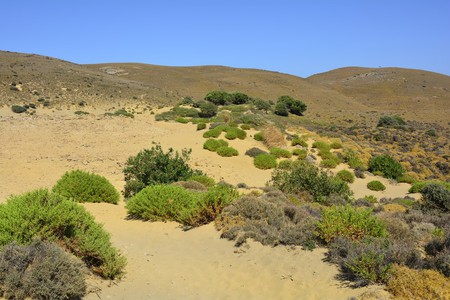