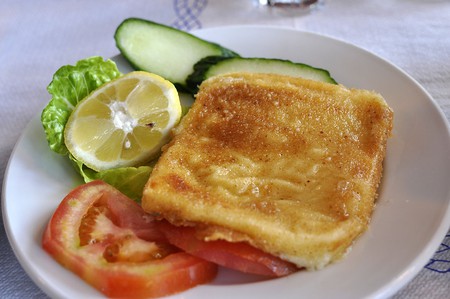 If you’ve ever travelled to or lived in Greece, you must be familiar with the traditional dishes available in tavernas and eaten in homes throughout the country. But Greek cuisine is filled with delicacies and specialties you can’t often find in the usual mezedopolio (mezze bar). Below is a small selection of Greek specialties you should try if you get a chance. A small disclaimer, though: some of the dishes presented include food that not everyone can stomach…

Magiritsa is a soup traditionally cooked and served in virtually every home in Greece on Holy Saturday (the day before Easter) following the midnight church service. The original recipe was created to use leftovers (heart, lungs, intestine and liver) from the lamb that is eaten on Easter Sunday, the following day, so that nothing goes to waste.

This economical soup may sound unappealing, but for many it is a tasty dish that is actually ideal after the 40-day fasting period of Lent. Of course, there are many variations of magiritsa, some including rice, others freshly grated tomatoes. Nowadays, it is also served as a vegetarian soup, prepared with rice, mushrooms and vegetable stock.

Wild greens, horta or horta vrasta, which literally means ‘boiled greens’, are a staple in any Greek household or taverna. They mainly consist of dandelion greens, though you can also find farmed summer horta called vlita in Greek, which is amaranth. Horta is easily prepared, just like spinach, and is eaten dressed with a little bit of olive oil and lemon.

Originally from Veria (or Veroia) in the Macedonian region, tsouknidopita is a filo pastry with a filling of tsouknida (nettle). The pie is prepared in the same way as tyropita (cheese-filled pie) or spanakopita (spinach-filled pie), including adding a little bit of feta, and is simply delicious.

This hard-to-pronounce dish may disgust some of you. Bourbouristi is actually the popping sound snails make when fried, hence the name of this specialty, saligaria bourbourista, in which snails are the stars. If you are an adventurous eater, this one is for you – but don’t expect it to taste like escargot. Saligaria bourbourista includes fried snails in olive oil, rosemary and wine vinegar on a bed of salt. A staple of the Cretan diet, this dish is easy to make at home.

Kokoretsi is another dish that shows up on Greek tables at Easter. Like magiritsa, it consists of lamb’s organs, but for this dish they’re skewered and wrapped in meters of cleaned intestines. The skewers are cooked over charcoal along with the rest of the lamb on Easter Sunday. If you enjoy it, know that kokoretsi is available all year around in specialized tavernas, but on Easter, roasting the lamb is a ritual every Greek household adheres to.

A photo posted by Yiannos Anastasiades (@yiannosanastasiades) on Sep 17, 2016 at 5:37am PDT

Patsa is basically a soup made from legs of pork, although you can also add pig intestines – basically the parts that not everyone particularly wants to eat. Of course, if you want to try to cook this yourself, you could use beef or lamb, depending on your taste. In Greece, especially in Athens, this strong-smelling soup apparently relaxes the stomach, making it a popular hangover food. It was, and still is, common to find partiers heading to the few tavernas in the meat market on Athinas street to eat patsa the morning after. Of course, given its contents, it might have the opposite effect for some. If you still feel like trying it, here is a recipe for the kitchen daredevils among you.

Kalitsounia are little triangular or half-moon shaped cheese pies that come in different flavors, including a sweet variety. Although they’re mainly found in Crete, you can find them all around mainland Greece nowadays. They’re made with myzithra, the Greek equivalent to ricotta cheese, or anthrotyri cheese, a fresh goat whey cheese, although one can find kalitsounia made with malaka cheese, which is similar to mozzarella but made with sheep’s milk. For the sweet version of kalitsounia, cinnamon and sugar are added to the cheese to bring out a sweeter taste. As far as the dough, you can either use filo (or phyllo) dough or a very thin pâte brisée. Either way, this is a treat you definitely should try if you get a chance.