7 Style Lessons That Fashion Learnt from the Greeks 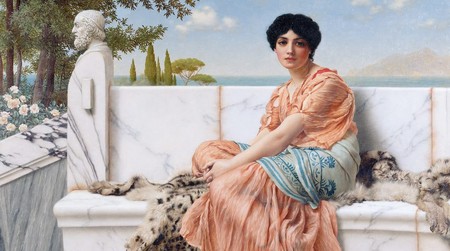 From ancient Greek dresses to the pompoms on your sandals, read Culture Trip’s rundown of modern style lessons that fashion learnt from the Greeks.

In a globalised world, the influences of traditional culture on contemporary fashion are increasingly obvious and recurrent. Many major labels have even come under fire for appropriating patterns, fabrics and silhouettes for their collections. Greece is one such place that has inspired modern-day fashion.

Famous for their rich ancient culture, it’s no surprise that the impact of Greek design can be seen throughout the visual language of contemporary fashion. From Chanel to Gucci, here are the style lessons that fashion learnt from the Greeks.

To start with the most iconic and obvious, there’s no shortage of examples of how designers have commandeered the Ancient Greek style of dress for more modern purposes. The ‘Chiton’ and the ‘Stola’ refer to the loose, elegant drape of the Greek dress. Recently, the SS18 collections were full of references to these ancient styles. Sacai brought tiered white lace to the catwalk, while Stella McCartney offered a modern interpretation with loose-knitted jumpers layered over pale silk. Also, Roksanda showed long sleeveless white dresses with rope tie details. Looking back, Chanel also staged their collection around Ancient Greece, erecting a faux-Acropolis for their Cruise collection. Meanwhile, Gucci’s request to stage their show at the real Acropolis was denied, even after they ran a campaign around Ancient Greek statues.

The uniform of the Greek soldiers who guard parliament in Syntagma Square is often photographed, and rightly so. The theatricality of their clothes is hard to ignore, especially the Tsarouhia – the traditional shoe that the soldiers wear. The pointed shoe has its roots in the 15th-century ‘Crakows’; the lineage from historical dress to modern style runs deep. A recent example of its influence was seen at Loewe. Jonathan Anderson offered a modern, sporty take on the elf-like footwear. Meanwhile, the pompoms on the soldier’s shoes can be seen to have influenced more contemporary Greek summer sandals, as well as adding a statement edge to heels such as these from Topshop. 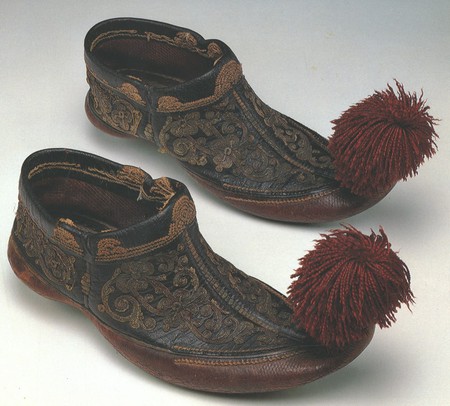 Another traditional part of the Greek soldier’s uniform, the Fustanella is a white, tiered kilt that has clearly impacted contemporary style. At Moschino SS18, this could be seen in the pink tulle skirts that were offered. Molly Goddard’s big layered dresses certainly pay homage to the volume of the Greek kilts too. The Fustanella was originally designed to convey stature and prowess of the men who wore them. Given the way in which fashion has looked to empowerment through dress in recent seasons, one can argue that the whole maximalist trend has roots in the performative, statement-making nature of items such as the Greek Fustanella. 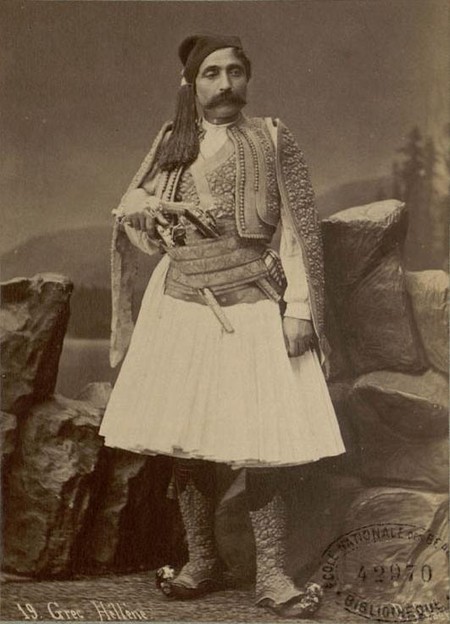 The headdress of the Karagouna

The ornate headdress associated with the traditional Karagouna is a look that featured heavily in the Gucci AW18 show. The classic style is an embroidered scarf that is wrapped around the head and decorated with coins. This Byzantine style extends beyond Gucci’s catwalk. Elie Saab’s couture show this season offered sparkling headpieces to rival the originals. A few seasons ago, bejewelled hairpieces from the likes of London designer Ashley Williams lent a contemporary twist to this decorative approach to accessorising.

If you visit the Archaeological Museum in Athens, you’ll encounter the astounding collection of Mycenaean gold and jewellery discovered by Heinrich Schliemann in 1890. Similarly, the Benaki Museum is full of Byzantine treasures. Fast forward to 2018, and the influence of such designs is widely felt. Recent examples include the Gucci AW18 show (Alessandro Michele has a well-known fascination with antiquity), along with the likes of Alexander McQueen’s ruby-and-silver chained necklaces from SS18, gold-and-turquoise bracelets from the same season at Givenchy and the highly decorative, tasselled necklaces from Saint Laurent AW18.

Intricate brocade embroidery was a staple of traditional Greek costume across the region. The detail and focus that went into crafting each piece testify to the importance of dress clothes in the enactment of customs, especially marriage ceremonies and religious dress. Today, the Orthodox Greek priests still wear bright, elaborate robes for special religious occasions, such as Easter. In contemporary fashion, the influence is visible in couture fashion, which uses delicate and traditional embroidery techniques to ascribe value to the garments. This is also true of ready-to-wear designers.

Last but not least is the impact that the traditional Grecian prints have had on contemporary fashion. In her SS17 collection, Mary Katrantzou directly referenced her Greek heritage by building a collection full of illustrations of stories from antiquity. Katrantzou is one of many who has found inspiration from the terracotta-based narratives. Other designers to have referenced the legendary tales of the Greek gods include Versace, whose logo is the head of Medusa. The Italian brand regularly uses characters from Greek mythology and Greek-inspired prints in their designs.