11 Unusual Things To Do in Crete, Greece 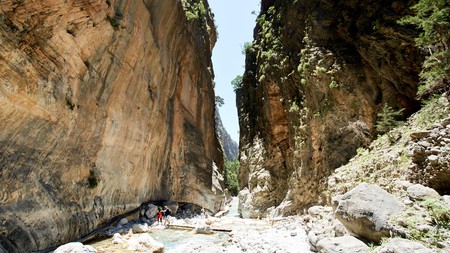 Sightseeing, sunbathing and dining at innumerable tavernas are just some of the ways to enjoy your time in Crete. But there’s another side of the island that’s worth exploring – from traditional weaving to visiting a former leper colony. We reveal the best offbeat activities this fascinating Greek island has to offer.

Crete is synonymous with great food, amazing beaches, the Cretan lyra and, of course, raki. And while museums and archaeological sites might be enough to understand the history of Crete, it is local customs that hold the key to truly discovering the island. While on the island, join a raki distillation feast, swim besides thousands of palm trees and learn how to work a traditional wooden loom.

If one thing comes to mind when you think of Crete, it’s raki (also known as tsikoudia). The strong local spirit, made from Cretan grapes, is found in restaurants and practically every home on the island. Come October and November, farmers turn the distillation process into a massive Cretan celebration – the rakokazanemata, filled with traditional music and delicious meze dishes. For a more intimate experience, observe the process at Myragapi, a private distillery in the rural settlement of Stironas.

Spend an unforgettable night at one of the many places in Heraklion city offering traditional food, paired with raki and live music until the early hours. Listen to musicians play the Cretan lyra, while locals perform traditional Cretan dances. “Renowned musicians invite the younger ones on stage to perform together, and soon everyone is part of one big group of happy people,” says local lyra musician Marinos Giantsidis. Get a taste of an authentic Cretan fiesta at Palaiino or Idiomelo.

It’s definitely worth paying a visit to Spinalonga, a naturally beautiful island and former Venetian fortress that served as a leper colony for more than 50 years. Spinalonga, in the Gulf of Elounda in the Lasithi region, was home people suffering from Hansen’s disease in the early- to mid-20th century to keep them separate from the rest of the population. Guided tours during the summer will introduce you to Spinalonga’s tortured past and one of the most challenging chapters in Crete’s history.

Knives are a symbol of Cretan pride, highly intertwined with the island’s rich heritage. But few Cretans still practise the craft of knife-making the old-fashioned way. Mihalis Pahticos is one of the experts, bringing tradition to life through his crucible. Visit Armenis, his workshop and store in Chania city (Sifaka 14), to watch him make a knife from scratch. “Each knife is not only functional but also has its own personality,” he says. “No two knives look alike – they’re handmade, thus unique.”

Swim next to a tropical palm grove

About 20km (12mi) east of Sitia town lies Vai, a magnificent beach of white sand and turquoise waters, surrounded by palm trees – a landscape quite uncommon for a Greek island. Boasting 5,000 Cretan palm trees (Phoenix theophrasti) and stretching across a wide valley, Vai forms the largest palm grove in Europe. Relax under an umbrella, grab a bite to eat or wander through the lush forest to take in the idyllic scenery.

If you thought weaving on a loom was a dead art, this sustainable fashion brand will prove you wrong. Klotho, founded in Crete in 2016 by designer Alexandra Theohari, presents contemporary items, all handmade on the loom. Pass by the studio and showroom to check out the collections, or take part in Klotho’s weaving workshops. As Alexandra says: “The wooden loom uses a very old technique, but gives you the opportunity to create modern pieces, solely relying on the weaver’s dexterity and imagination.”

CretAquarium is an artificial marine universe, where visitors can marvel at 2,000 sea animals of 200 different Mediterranean species. Swimming in the site’s 60 tanks, in 1.7m litres of seawater, are special creatures – from sea turtles to mighty sharks – bringing you one step closer to understanding the Mediterranean Sea’s impressive biodiversity.

In 1982, Irish musician Ross Daly founded Labyrinth, a creative space exploring music traditions from around the world. It has since become the beating heart of Crete’s music scene, organising a host of seminars and concerts. “We focus on traditions related to tropical music coming from the Mediterranean and all the way to Asia Minor, Middle East, Persia and India,” says events organiser Stella Vassilaki. Take part in an instrument-centric or voice workshop, and catch one of the gigs every Friday in the summer.

A seaside village in southern Crete was once an epicentre of the hippie movement. During the 60s, hippies and tourists gathered in the caves of Matala village, where they spent weeks, months, some of them even years, following an all-natural lifestyle filled with music, fishing, painting and meditation. Under those same principles, the area now holds Matala Beach Festival every summer, hosting live performances and artistic activities, inviting everyone to experience the same hippy freedom on the beach they experienced 60 years ago.

Learn a craft in an artistic village

In Greek mythology, Verekinthos was the mountain where mythical beings taught people crafts such as metallurgy, pottery and glasswork. Today, that same place in Chania is an artistic village, run by a community of diverse craftspeople. Pick one of their courses to learn anything from sculpture and ceramics to woodworking and hagiography. “The crafts revive but also actively evolve tradition,” says artisan Yiannis Vlavogilakis. “In these times of consumerism, when cheap and easy products prevail, any handicrafts workshop is a continuation of tradition.”

Even though Samariá is Crete’s most famous gorge, its majestic morphology still makes it one of the most unusual and astonishing sights that the island has to offer. The 16km (10mi) hike is well worth the effort, giving you plenty of opportunities to spot native animal species like kri-kri goats or Cretan wildcats, against a backdrop of stunning views. At its narrowest point, the gorge closes in to a width of only 3m (10ft) and a height of almost 300m (1,000ft).