10 Street Artists You Should Know From Greece 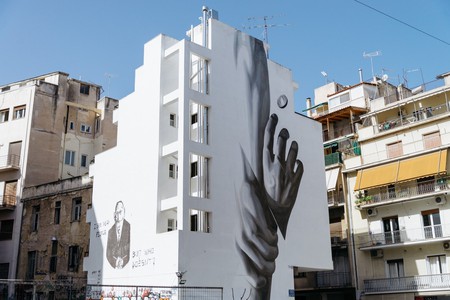 These Greek and Greece-based artists used their work to reimagine the city space, bringing the frustrations and anger toward the political establishment into the open. Through rich, striking murals – and often with the use of cynical humour – these Greek street artists shaped a new agenda for visual artists. In many ways they led the way for the visual arts scene in Athens to become one of the most talked about in Europe. Read Culture Trip’s guide to the names in Greek street art that you need to know.

One of the most talked about artists in the Athenian visual arts scene, Cacao Rocks bridges the gap between the street art community and commercial art spaces. He creates bold, abstract works that speak of the complex relationships creatives have with Athens. Between love and hate and between frustration and fascination is where you’ll find Cacao Rocks operating. His works are punchy and powerful and hugely popular. The artist has exhibited widely across Europe, including a solo show in Mykonos last year.

Funny, provocative and absurd, Ath1281 is an Athens-based street artist adept at creating eye-catching and powerful work. Although his drawings, murals and ceramics at first seem comical, there is a more cutting approach at the core. The works vividly pierce through the facade of human civilisation and offer scenes which evoke huge pathos, as well as amusement, from the viewer. Works are generally small-scale and less obviously placed – keep an eye out.

Athens-based street artist INO is one of the city’s most prolific and respected artists working today. Often working in black and white, his large-scale paintings cover whole building walls and are always impactful. The artist focusses on putting out human narratives, with imagery that offers a dystopian and sometimes gut wrenching commentary on the political and cultural landscape. Though serious and deliberate, there are playful elements too. While continuing to work in his home city, INO’s work can be found in major cities across the world.

Athens-based artist Billy Gee is also one of the city’s most respected skaters. His visual work is prolific and varied, having exhibited at established institutions such as the Bouziani Museum and Onassis Foundation in Athens. He also regularly creates murals on the streets of Athens. Billy Gee’s work is surreal and colourful, offering large-scale paintings of animals, historical figures and more.

Illustrator, muralist and artist, Thisisopium (real name Alex Simopoulos) is a Greek artist based between Athens and London. Often working outdoors, Simopoulos creates huge, vivid scenes that draw on the natural world and mix elements of magical realism. Political and astute, he is highly active in the urban art scene in Athens. Previous works have commented on everything from the ‘exotification’ of Athens (in collaboration with the aforementioned Cacao Rocks) to more abstract and atmospheric pieces.

Born in Poland, Dimitris Taxis is a visual artist based in Greece. Taxis’ work is political and poignant. Large murals depict human scenes, with either historical figures or depictions of contemporary life. His style is recognisable also through the use of delicate lines. Though many of his pieces are in Greece, Taxis has also worked across Europe.

Insane 51 creates murals on the streets of Athens and also inside community spaces throughout the city. His works often depict humans and animals in motion. The style is hyper-realistic and also often evokes scenes from iconic films such as Star Wars and Fear and Loathing in Las Vegas.

N_Grams is an Athens-based visual artist who works across a range of mediums, from street murals to small-scale collages. The artist began working in graffiti at a time when the genre was relatively unknown, way back in 1993. N_grams works with geometric shapes to create figures as well as abstract scenes. Works are often situational, working with the environments they were created in. In doing so, he creates a sense of inter-connectivity, which extends not only to the work and the space but the viewer and the work too.

Antonis Hambas is an exciting Greek visual artist who began practicing street art back in 2015. The transition to working in public spaces followed on from Hambas’ successful career as an artist in New York and Greece in the years prior to this. His subjects are varied, ranging from realistic depictions of human beings to more surreal images. Deeply evocative, the images are soulful and thoughtful, often offering a glimmer of hope in his portraits.

Fikos uses the medium of street art to explore traditional Greek painting. The artist has experience as both a graffiti artist and an iconographer in Orthodox Christian churches, rendering a unique quality to his work. Working across the world, from Greece to Mexico, Morocco, France and Thailand, his beautiful murals evoke scenes from ancient Greek civilisations and reinterpret the modern age through historical scenes. Fikos’ style is flat and serene, evoking the traditional form of Byzantine painting for a contemporary audience.