10 Contemporary Greek Artists You Should Know 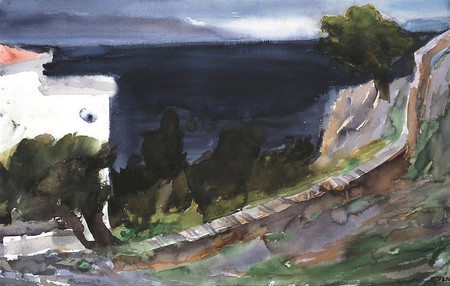 Greece may be known for its ancient culture and classic art, but the country also has a dynamic contemporary art scene. Know any? If the answer to this question is negative, don’t worry as here is a list of 10 contemporary Greek artists worth knowing a little more about.

Greek-born American Stephen Antonakos was a sculptor known for his abstract sculptures often incorporating neon. His works have been exhibited at major international art exhibitions such as Documenta 6 in 1977 in Kassel, Germany and he also represented Greece at the Venice Biennale in 1997. Visitors can see his works in many important museums such as the Whitney Museum of American Art, the Metropolitan Museum of Art, the Solomon R. Guggenheim Museum, as well as at the National Museum of Contemporary Art in Athens. Antonakos received the National Academy of Design lifetime achievement award in 2011. He died in 2013 in New York City. 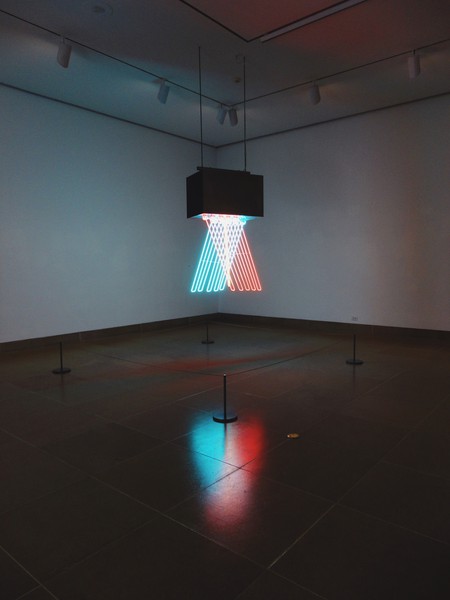 Born on 26 February 1906 in Athens, Nikos Hadjikyriakos-Ghikas was a prolific painter, sculptor, engraver and writer. As a young 23-year-old, he went to Paris in 1923 to study French Literature and Esthetics at the Sorbonne University. It was there that he participated in an exhibition that took place in the Salon des Indépendants.

He later furthered his education at the Academie Ranson, studying painting, and held his first exhibition at Gallerie Percier in 1927, where he even was noticed by the great Picasso himself. Back in Greece, he was part of the Generation of the Thirties, a group of Greek writers and painters who had the desire to enrich the country’s present by modernizing its ancient glories.

Co-founder of the “Armos” art group, he represented Greece at the 1950 Venice Biennale. The artist gained international fame and exhibited across the globe, and even became a member of the Academy of Athens as well as of the Royal Academy in London and the Tiberiana Academy in Rome. Considered a leading Greek painter and known for his Greek landscapes, his home has been transformed into a museum run by the Benaki museum. 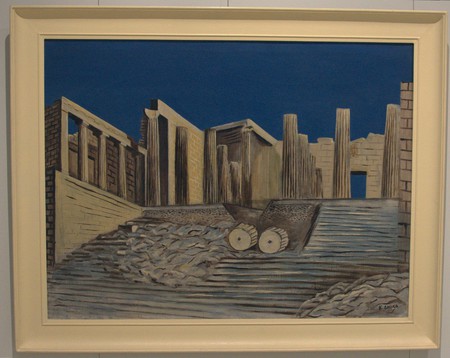 Born in 1933 in Mani, Greece, Chryssa Vardea-Mavromichali, professionally known as Chryssa, was a Greek-American artist known for her pioneering work in light art. Having studied in Paris at the Académie de la Grande Chaumière, she later relocated to the United States and established her studio there. In 1961, the Guggenheim hosted a solo exhibition of her works, shortly followed by her very first exhibition in New York at Betty Parsons Gallery. She returned to Greece in 1992 and set her art studio in the Neos Kosmos neighborhood, in Athens. She passed away in 2013, aged 79. Her piece Mott Street is displayed in the vestibule of Evangelismos metro station.

Born in 1930, Christos Caras first studied political sciences in Panteion University before pursuing painting at the School of Fine Arts (1951-1955). With a state scholarship in hand, he studied in Paris at l’Ecole des Beaux-Arts. Travelling to many European countries, the USA and Canada, his first solo exhibition was held in Athens, though he had participated in many group exhibitions before. His style ranges from figurative to abstract and surreal art. He was honored in 2011 by the Academy of Athens for his lifelong artistic contribution. 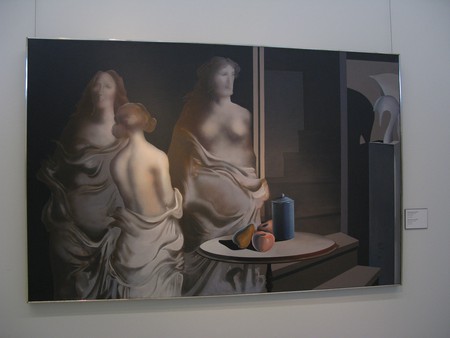 Born in 1935 in Athens, Alekos Fassianos, an Athens Academy of Fine Arts alumnus, moved to Paris in 1960 to study lithography at the Paris National School of Arts. At this time, he met several artists and writers. Exhibited in the top world museums particularly in Athens, Paris, New York, Tokyo and Sao Paulo, his works can be found in museums but also in private collections. Fassianos received the French award of the “Celebrities of the Officer of the Legion of Honor” in 2013, and currently lives and works in Athens and still considers France as his second home. 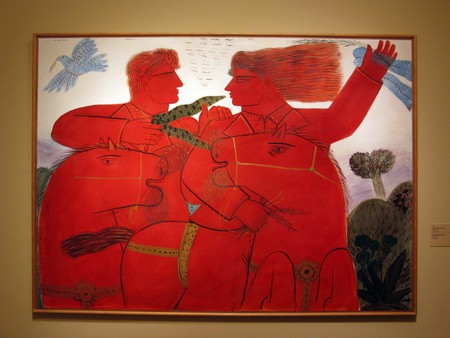 Born in the little island of Hydra in 1925, Panayiotis Tetsis spent his childhood and teenage years on the island, before his family moved to Piraeus in 1937. He graduated from the Athens School of Fine Arts in 1949, and later pursued postgraduate studies at l’Ecole des Beaux Arts in 1953-56 in Paris. This is where he learned the art of engraving. Mostly known for its post-impressionistic seascapes, he regarded himself as a painter driven by his senses. Along with Hadjikyriakos-Ghikas and other Greek artists, Tetsis was part of the Armos art group. He passed away in Athens in 2016. 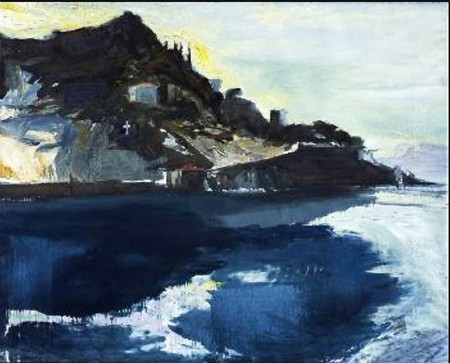 Born in Athens, Chryssa Romanos lived in the Greek capital until 1961 before moving for 20 years in Paris. Though she returned to Greece in 1981, it was during those two decades in France that she developed her artistic temperament and met her future companion, artist Nikos Kessanlis. As she spent time in Western art capitals during the post-war period, she is part of a movement of Greek artists who influenced the formation of international artistic movements. A prolific artist, Romanos’ work ranges from abstract painting, collage and décollage. She passed away in 2006.

#flashback #February 2014 @the_breeder_gallery #ChryssaRomanos (1931-2006). A distinctive Greek artist, quickly established an individualized style which placed her at the forefront of global artistic developments of her time. The exhibition consisted of collage and décollage work, all of which characterized by a critical position on sociopolitical and artistic issues, as well as poetic polysemy. •Chryssa Romanos, #Labyrinth, 1965, collage on canvas, 104×85 cm #TheBreeder#TheBreederGallery#TheBreederArchive

Born in 1936, Lucas Samaras is from the lovely town of Kastoria, Greece. He studied at Rutgers University on a scholarship. Mostly known as a sculptor, and painter, he often used images of himself as subject, which many criticized. In 1973, he produced a series of self-portraits by playing around with the wet dyes of Polaroid prints. Throughout his career, he participated in more than 100 solo exhibitions and represented Greece at the 2009 Venice Biennale. 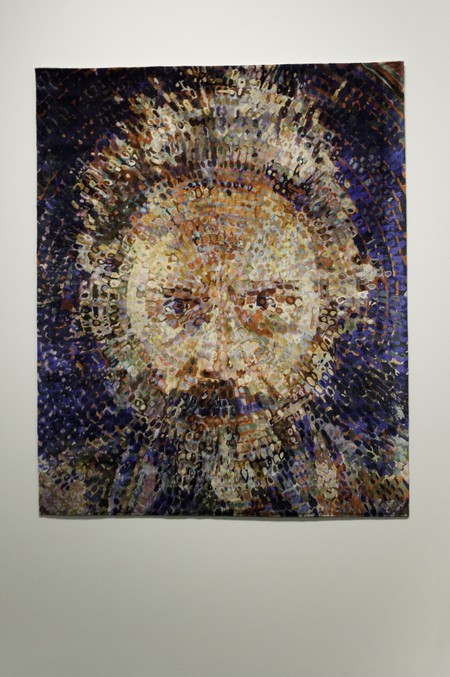 Born in Piraeus in 1936, Jannis Kounellis is a Greek-Italian sculptor known to be a pioneer in the arte povera movement. After he moved to Rome in 1956 to study at the Academy of Fine Arts, he had his first solo exhibition in in 1960 at La Tartaruga gallery. While he took part in the Venice Biennale in 1972, the artist quickly became a regular contributor to the exhibition. The subject of solo exhibitions at international museums including the Museum of Cycladic Art in Athens, Kounellis was known for his use of mundane materials, such as steel, stones or coal, in his work, the very substance of the arte povera artistic movement. He died in February 2017, at the age of 80. 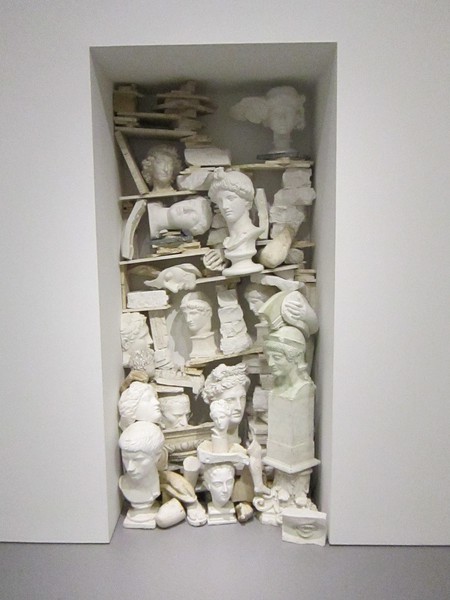 Takis (or Panagiotis Vassilakis) was born in Athens in 1925. A self-taught sculptor, Takis left Greece in 1954 and travelled around Europe and the USA. Exhibited in Athens, Paris, London, New York and other cities, he started experimenting with magnetic fields in 1958, and became known for his telemagnetic sculptures. In 1960 he was awarded a patent for ”Telesculpture” and for ”Electromagnetic Telesculpture” by the French Ministry of Industry and is considered a pioneering artist in the international art scene and a leading representative of kinetic art. In 1958, he won the Grand Prize at the Paris New Biennale. Very popular in France, his works can be found in many public locations in and around Paris, such as Le Bassin, at La Défense. 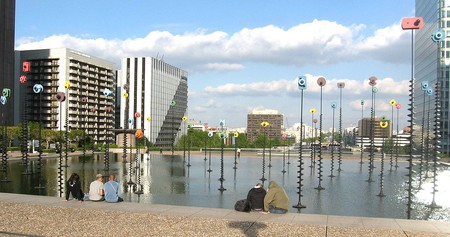