10 Awesome Reasons Thessaloniki Should Be On Your Bucket List

10 Awesome Reasons Thessaloniki Should Be On Your Bucket List

George Zongolopoulos' "Umbrellas" on the waterfront | © Ethel Dilouambaka
Dotted with historic sights but resolutely modern, Greece’s second city is a destination worth visiting – the New York Times named it one of their top destinations for 2016. The laid-back yet vibrant atmosphere of the city is its calling card, but in case you need more reasons to visit, here is a list of why Thessaloniki deserves to be on your bucket list.

The City Is Walkable

Sprawling around the coastline of the Thermaic Gulf, Thessaloniki is filled with unique landmarks. The shore spans from the ferry harbour to the White Tower, and the many Byzantine churches and vestiges of past life sprinkled throughout the city and its historical districts make it ideal for sightseeing.

There Are Plenty Of Sights To See

With ancient ruins rooted in the middle of the city (from UNESCO sites including the Roman Agora, the Arch of Galerius, the Rotonda, the Byzantine Baths and the Crypt of Agios Demetrios), a plethora of museums – such as the Museum of Byzantine Culture, the Archeological museum and the Cinema Museum of Thessaloniki, built for the city’s status as Cultural Capital of Europe in 1997 – as well as astonishing churches (make sure to visit Aghia Sofia), you won’t have time to see and experience it all in one go. The city offers plenty of affordable accommodations and great eats to make your visit even more enjoyable.

Thessaloniki’s cuisine is known across the country for its quality and variety. Because of its historical past, the city’s gastronomy boasts flavors from Pontus, Asia Minor, and Constantinople as well as Arab and Armenian influences that infuse traditional dishes with exotic nuances. You may easily find yourself eager to order the entire menu, but relax, the city is also perfect for long walks so you can burn off the extra calories later.

Bougatsan, a cross between a croissant and a sweet bougatsa © Ethel Dilouambaka

The City Is Conveniently Located

Set on the coast in northern Greece, Thessaloniki is the ultimate gateway to many destinations for a quick getaway, including the Halkidiki peninsula with its beautiful beaches, the region of Greek Macedonia with its picturesque little villages, or even the islands of Thassos or Limnos – are all nearby. The only thing required is a sense of adventure and a thirst for discovery.

Don’t Miss Your Chance To Visit The Ladadika District

This beautiful, walkable area is located off the Thessaloniki harbor and is a hotspot when it comes to eating and drinking. Named after the numerous olive oil shops that use to populate the area, it is the former bazaar and central market of the city under the Ottoman rule, now peppered with charming tiny tavernas, restaurants and bars and clubs that fill this lively historical landmark.

It Is Ideal For Shopping Addicts

It may not be as vast as its big sister Athens, but Thessaloniki still has a good selection of high-end boutiques and fast fashion retailers. Although the majority is located on Tsimikis street, the nearby streets of Pavlou Mela and Mitropoleos are home to designer boutiques. Fair warning, you may find yourself actually shopping till you drop.

Thessaloniki has its own stunning vantage point, known as the Eptapyrgio Castle. This stunning fortress perched on the hilltops overlooking the city offers all-encompassing views that include the Gulf. Whether you visit it by day or at night (a common habit of young people), it is an attraction you shouldn’t miss. On your way back, discover the small little streets and drop by one of the small mezedopoleio to enjoy some local delicacies.

Downtown Streets Offer Insight Into The City’s Past

One of the first things that strikes you in Thessaloniki is the juxtaposition of buildings of different styles and influences. Throughout its history, the city was home to Greeks, Jews, Ottomans and refugees from Asia Minor, to name a few. These architectural vestiges are still visible today and are a real sight to marvel at while you’re walking the city. Check out Thessaloniki Walking Tours to find a thematic walk to inspire you.

It Has Its Own Natural Park

Nature lovers are not forgotten. Just 10 kilometers away, the Axios-Loudias-Aliakmonas National Park – considered to be one of the most important wetland systems in Greece and greater Europe – offers refuge for those looking to commune with nature. Covering an area of 38,800 hectares, it is ideal for any escape into the wild.

You may have figured it out already, but Thessaloniki deserves its place on any true foodie’s bucket list. One of the main items that must be tried and adopted is the bougatsa. This (usually) sweet phyllo pie has, like so many other Greek specialties, a long history – but is now considered as the ultimate Thessalonian breakfast. Make sure to pop by Serraikon, one of the oldest bougatsa shops in town to try this local delicacy. 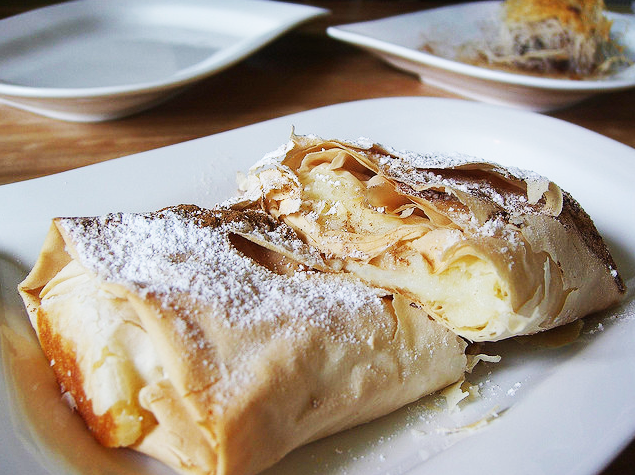