What To Do And See In Weißensee 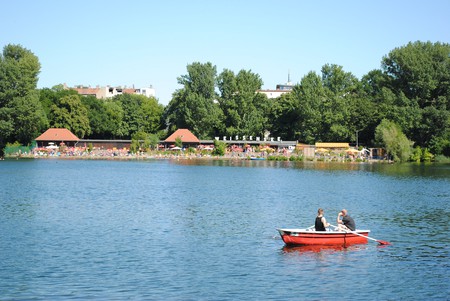 Newcomers to Berlin on the hunt for the next up-and-coming neighbourhood will probably be disappointed at first glance at Weißensee, where there are no posh boutiques selling Italian shoes or parlours serving Japanese white tea. Yet, this area not only stores some unexpected findings, strictly treasured by the locals, but it also retains the charm of the untouched, pristine village within the city. Still relatively central (a mere 15 minutes via tram from Alexanderplatz), Weißensee is a small area of east Berlin, part of the Pankow district, conveniently located just above Prenzlauer Berg and Lichtenberg.

The area is mostly residential, predominantly populated by families with young children and a fair share of elderly people walking the dog in the early morning. However, Weißensee is able to reward those who are ready to dip beneath its surface.

Needless to say, the focal point of the neighbourhood is the Weißer See. The See, after which the area is named, is a natural lake dating back to the last glaciation. Surrounded by a quiet park completed with trees, paths and benches, it provides a great space for swimming at Summer and a relaxed spot for cycling, reading and doing yoga in the other seasons.

The lake comes to life at summertime, when it attracts tourists and locals alike to its clean waters and nice, fine sand. The Strandbad Weissensee (Weissensee bathing beach) pampers its patrons with all the facilities required for a day by the lake: a playground for children, good music, more than one choice for drinks and food, and a dedicated area where, in typical Berlin style, summertime revellers can dance swing music in bikinis or even attend wedding receptions. After sunset the clientele turns to a traditional Weißbier, so grab a fancy mojito and delight in the different atmosphere enveloping the lake, authentic and slightly out of time. 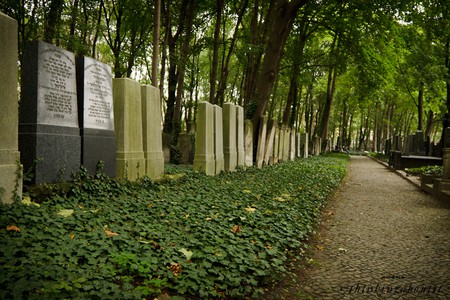 Walking down to Southern Weißensee, a stop is recommended at the Jüdischer Friedhof, the largest Jewish Cemetery in Europe and a must-see for anyone visiting Berlin.

The cemetery, which surprisingly was left almost untouched by the Nazis, occupies a 43h surface, where over 115,000 people have been laid to rest. Amongst these are both well-known personalities and less well-known people, all equal to the eye of death, history and God: those who took their own lives when threatened by deportation, those who died in concentration camps and finally, those whose bodies could not be found, but were given a grave as a token to honour their human dignity.

At the entrance, visitors face an extensive circular ground (a powerful memorial honouring the victims of the Holocaust) and start to get swallowed by the immense Friedhof, with its trees, its graves, its secludedness and its sense of history.

The Friedhof is certainly a place to visit for many different reasons. It is a place to get lost, a place to inhale remembrance and a place not to forget – everything in the strangely peaceful and poignant setting of a forest cemetery in the heart of Berlin.

Part of the beauty of a visit to Weißensee certainly lies in the unexpected findings, such as its fantastic street art. From the many wall graffitis scattered around the area to the thought-provoking mural enlightening a 30-meter portion of the Heinrich-Böll-Bibliothek in Gerifswalderstraße, Weißensee proves to be far beyond what it looks like from the outside. 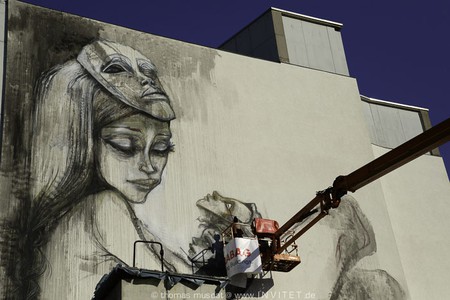 The mural, realised by the artistic duo Jasmin Siddqui (aka Hera, 34) and Falk Lehmann (aka Akut, 38), celebrates humanity and hope. Enriched by a quote from Martin Luther (‘If I knew the world ended tomorrow, I would still plant an apple tree today’). Translated in many different languages (ideally as many as those of the passers walking down Greifswalderstraße), the photorealistic image stretches upwards and melts with the blue-grey sky overlooking Berlin and all of its people. 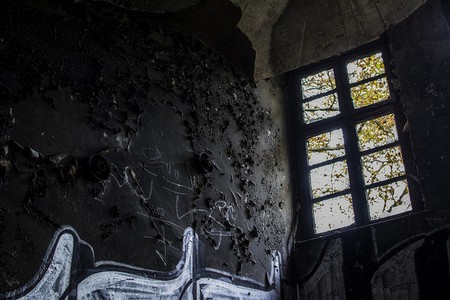 Particularly worthy of attention and one of the best hidden secrets of the district is the abandoned Kinderkrankenhaus(Children Hospital). The hospital, built between 1909 and 1911 in an attempt to provide a better care for mothers and infants, was shut down in 1992. The first of this kind in Prussia, and doubtlessly a crowning glory for the Kaiser, it was constantly broadened up to becoming the best known hospital for children. After being neglected for several years, it was acquired by a Russian investor and subsequently requested back by the city of Berlin, which succeeded in rescinding the sale earlier this year.

Part of the ‘abandoned Berlin,’ the hospital retains an undeniable charm, and the most adventurous guarantee that the graffitis decorating the internal walls are more than worth a visit (natürlich, at your own risk). 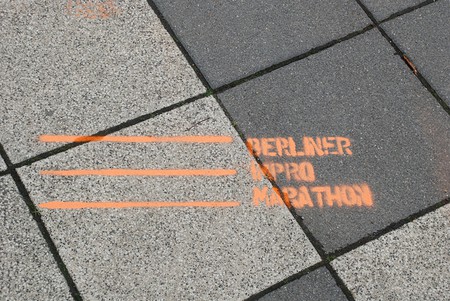 Continuing to move around the southern path, it is certainly worth mentioning the Brotfabrik. Literally meaning ‘bread factory’ (the building was originally a bakery), Brotfabrik has now been turned into a well-known cultural and artistic hub, comprising a Kino, a Galerie and a Bühne (theater). It hosts a varied array of performances on a continuous basis, from art exhibitions and literary events to concerts and puppet theater, both by independent young artists and well-known names. The complex is completed with a Kneipe whose wood panels and counter come directly from the Kino Venus in Hohenschönhauserst., while the parquet and wall paintings are all original pieces dating 1900.

Finally, but unquestionably not less remarkable, is the complex located in western Weißensee, where streets of picturesque names take the place of the German-sounding, hard-to-pronounce and impossible-to-remember streets usually found in Berlin. Untwining the net of Michelangelost., Bizetst. and Puccinist., you’ll culminate in Caligari Platz, where lies in untouched abandon a keepsake of the golden age of the silent movie era.

It was, in fact at the Lixie Studios in what is now Liebermannstraße that one of the most influential films of all times, Das Cabinet des Dr. Caligari, was entirely shot.

Between the 1920s and 1930s, hundreds of movies were filmed in Weißensee, which became home to two of the first film production studios (Vitascope Studios in Lindenstraße 32-34 and Mutoskop Studios in Markgrafenstraße 94), thanks to its low property prices and close proximity to the borders of the old Berlin.

Little Hollywood Weißensee achieved its final popularity amongst Berliners with the establishment of the Stummfilmkino Delphi, the largest and most luxurious silent movie theater of the whole city, counting a spectacular 870 seats and room and acoustic for an orchestra with 13 members.

Even though it was slightly damaged during WWII, the Kino remained in full action until the day of its closure in 1959, entertaining Berliners with thousands of extravagant movies, witnessing the golden ages of the silent movie era and persisting in its leading role until the verge of modern cinema.

Despite its prolonged closure, it has been recently restructured, currently hosts occasional artistic events and plans for a full reopening are on their way. 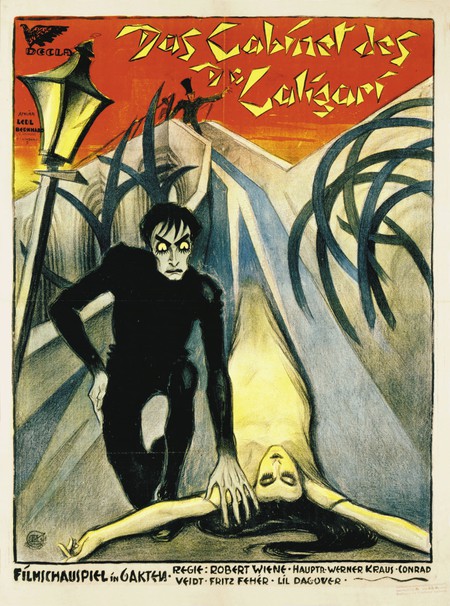 Just around the corner there is finally the small Dutch Quarter with its red bricks mansions, Mirbachplatz with the surviving church tower (the bells still ring on Sunday mornings) and the houses of Mies van der Rohe and Bertolt Brecht, definitive evidence that Berlin has never ending secrets to turn back the hands of time.
By Elisa Settembre