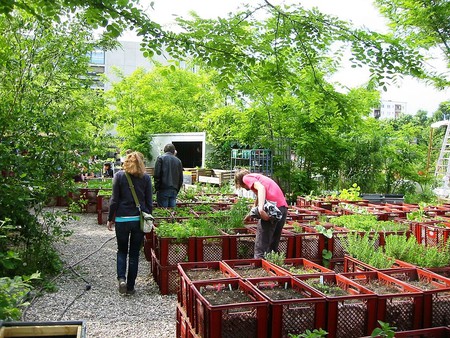 Berlin is often lauded for its multitude of parks and other green spaces. Many residents opt to ride bikes or take public transportation instead of owning a car. Meanwhile, container-free grocery stores are all the rage. However, no eco-friendly city would be complete without a solid urban gardening initiative. That’s where the Prinzessinnengarten comes in.

Determined to add a bit of greenery to an otherwise barren surrounding cityscape, Marco Clausen and Robert Shaw, two men with minimal gardening experience, came together to cultivate the Prinzessinnengarten in 2009 in Moritzplatz, one of the most urban industrial parts of Kreuzberg. The initiative took off thanks to their desire to “sew the seeds for a better quality of life” in Germany’s capital.

On a decrepit city lot that was vacant for more than 50 years, Clausen and Shaw worked together with members of the surrounding neighbourhood to clear away debris and plant the garden’s first seeds. The garden – and its caregivers – quickly aggregated, completely transforming the former desolate space into a place for exchange and learning for others who have minimal knowledge about growing food.

One of the biggest beauties of the Prinzessinnengarten is that it’s entirely transportable. In an ever-changing city like Berlin, this fact is an important one. Clausen and Shaw suspected that someday they would have to move the garden elsewhere to continue accommodating the growing interest in it and the idea of growing food right in the heart of the city. They were right.

Ten years after establishing the Moritzplatz garden, the organisation moved it to Neukölln. In line with its original vision, the Prinzessinnengarten Kollectiv Berlin still functions as a place where people can learn about growing food and serves as a haven for cultural interchange and community building.

Even for those who don’t rent a plot of land in the garden, it’s possible to enjoy the produce. The garden café serves some of the freshest and most phenomenal salads, healthy bowls and home-made sweets, all made with fruits and veggies taken from the garden itself. What’s more is that it sells much of the produce, making it easy for residents to eat affordably in the rhythm of the seasons. Indeed, the garden sustains itself through these commercial operations.

The idea for the garden in the future is to provide a place where people can rediscover what it takes to produce food in an effort to combat the increasing challenges posed by climate change and to promote healthier lifestyles within an urban setting. Everything at the garden is grown organically, and there are even on-site beehives to aid in the pollination process.