Top Things To See In The Altes Museum, Berlin

Like the rest of Berlin, the Altes Museum has seen its share of historically significant changes. Built in 1830, originally as a place for the Prussian royal family’s art collection, Altes Museum briefly served as a contemporary art museum under the GDR as well. Now, the Altes Museum holds Berlin’s collection of antiquities, which is the largest of its kind in the world.

Many are familiar with the iconic black and gold lacquered pottery of ancient Greece and present day Apulia, Italy. This artwork tells us much of what we know from a visual perspective about this classical civilization, and the imagery often depicts scenes from Greek mythology.
At Altes Museum, it is possible to see beautifully preserved examples of funerary vases and other pottery in the exhibition, ‘Dangerous Perfection – Ancient Funerary Vases from Apulia,’ located on the second floor of the museum since 2011. One of the most noteworthy of these pieces is the exquisite interior image found on a Greek drinking cup. There are many such images whose impeccable preservation is truly astounding.

In addition to Greek art and iconic pottery, the Altes Museum contains some impressive Greek and Roman sculptures, too. At the entrance, the ‘Gods of Olympus’ greet visitors in the Romanesque style rotunda. Further, the ‘Warrior of Dodona’ resides here, as well as ‘Portraits of Julius Caesar and Cleopatra VII,’ and ‘Wounded Amazon,’ which are considered to be highlights of the collection titled, ‘Ancient Worlds: Greeks, Etruscans, and Romans.’
Intricate sculptures like the ‘Medea Tragedy,’ ‘Achilles murdering the Trojan Troilus,’ and the ‘Enthroned Goddess of Taranto’ tell us a lot about the funeral rites and ceremonies of these ancient civilizations. The Altes Museum also has a number of other metal items like a silver cutlery set, small dishes, and jewels.
http://instagram.com/p/BHiYjzNgrU3/?taken-at=1626439

When it comes to classical civilization, most of us are quite familiar with the Greeks and the Romans. In fact, these are probably the first to groups that come to mind. They are by no means the only noteworthy of such societies, however. The Etruscans — today’s western Italy — for instance, played a significant role in the history of the time yet they still remain relatively mysterious.
Most museums have limited collections, making that of Altes Museum quite special because it is one of the largest in existence outside of Italy itself. Here, visitors can see the ‘Capua terra cotta tablet,’ which captures Etruscan text, a language no one has ever been able to fully translate; as well as many other interesting statues, frescoes, and artifacts.

The museum’s ‘Ancient Worlds’ collection also includes a repertoire of ancient Illyrian helmets from the Bronze Age, whose dings, chinks, scratches, and general signs of battering transfer us deep into the past of human civilization by giving us a glimpse of ancient warfare. More broadly, many of these helmets come from clashes between the Greeks and their enemies, which at one time included the Romans. 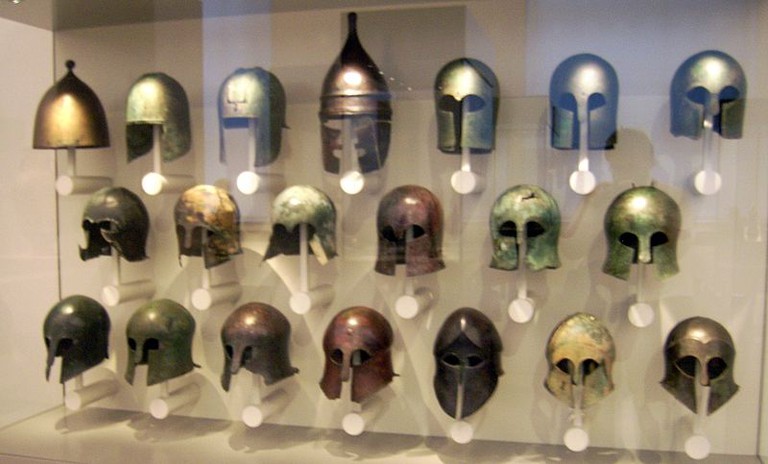