The 7 Best Punk Bars In Berlin

Esne Beltza at Clash | © Montecruz Photo/Flickr
Berlin is mostly known nowadays for its club scene or its trendy bars, furnished with up-cycled material. Yet, there’s a large part of the city that has remained loyal to the underground soul of the German Capital. We take a look at the best punk bars in Berlin.

This place has everything one might need on a night out. Pool, fußball, flipper, even board games. Although the walls are painted red and they do not encourage photos within the bar, there are demonstration flyers that surround this place, creating a unique atmosphere. Further, Syndikat is not only a smoky punk bar, but also a political collective, whose social involvement dates back to 30 years ago. The house’s special is the Mexikaner — Berlin’s version of a Bloody Mary shot, so make sure you enjoy one of them before you leave.

Clash is the younger, kreuzberger brother of Syndikat; located in the courtyard of red brick buildings near Mehringdamm Subway Station. Its rooms are spacious, perfect to host moshing hardcore gigs, especially on its birthday when a variety of bands will keep you excited all night long. 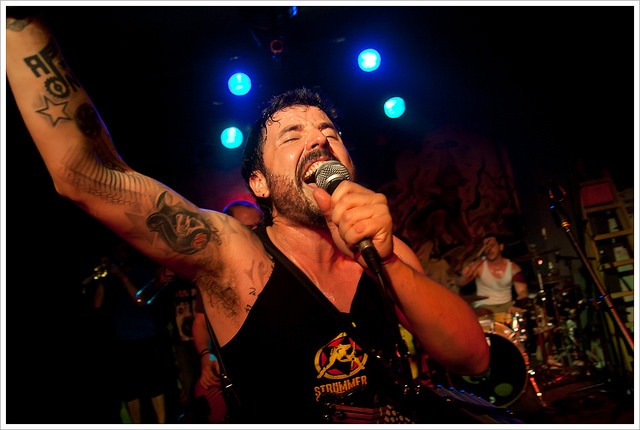 Music Venue
Ampl:tude at Schokoladen, Berlin | © endless autumn / Flickr
One of the legendary underground venues in Berlin is the Schokoladen , located in Mitte for more than 25 years. The venue hosts not only concerts but also readings and cultural events of various kinds. It’s not just about being the observer, from their theatre style wooden benches, the audience is encouraged to participate. From students to rock-grandpas, this bar has something for everyone.
More Info
Open In Google Maps
169 Ackerstraße, Mitte Berlin, Berlin, 10115, Germany
+49302826527
Visit website
Visit Facebook page

At first sight Supamolly doesn’t seem to differ from any other Berlin punk bar. Although you may be taken aback, once you reach the second room you will see why this place is so charming. There’s a metal winding staircase that leads to an upstairs bar that is also a niche for the DJ, whilst downstairs there is a stage and dancefloor. Sofas to relax on as you enjoy a drink and the music are not missing either.

Bar, German
Just a couple of side streets away from Oranienstraße there is the Trinkteufel, or ‘Drink devil’. The kind of bar summed up by a few choice adjectives: noisy, smokey, and grumpy — a grumpiness that extends from the veteran patrons to the bartenders, but hey, that’s part of its charm. If you want to experience the authentic Berliner Schnauze, here’s the place. Moreover, tacky horror gadgets such as caskets and skulls hang from the ceiling or peep from behind the row of booze bottles. Be careful, the inexpensive shots are liver-lethal.
More Info
Open In Google Maps
60 Naunynstraße, Bezirk Friedrichshain-Kreuzberg Berlin, Berlin, 10997, Germany
+49306147128
Visit website

Less known than its across-the-street neighbor, the infamous S.O.36, Franken is a rare punk gem. A giant, chiseled wooden piece of furniture contains a hypnotic amount of shiny bottles — the liquor selection here is vast. In the back of the room you can have a sit and enjoy a pint of German beer on red, upholstered benches vaguely reminiscent of American diners — that is if American diners’ selling point was gloominess. 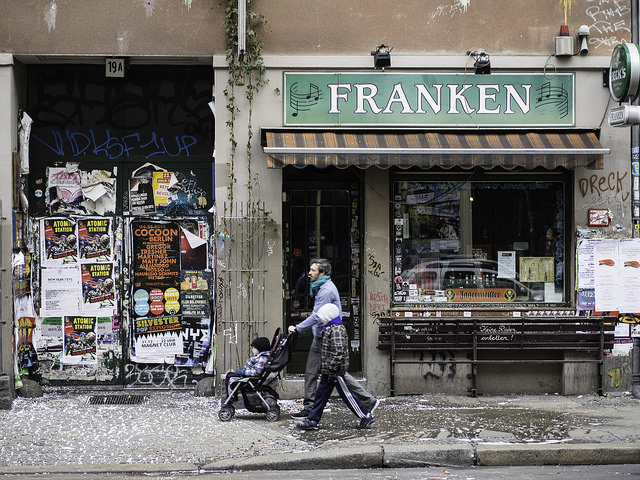 Amid the squats of the punkiest neighbourhood in Berlin, there is the K19. It looks like any other bar of its kind, with walls covered in stickers and gig flyers, fridges full of Sterni and Berliners. But looking to the left of the entrance, there are stairs leading to a cellar; where once you head downstairs you will notice that this is the place where some of the most hardcore gigs in this area have been played. 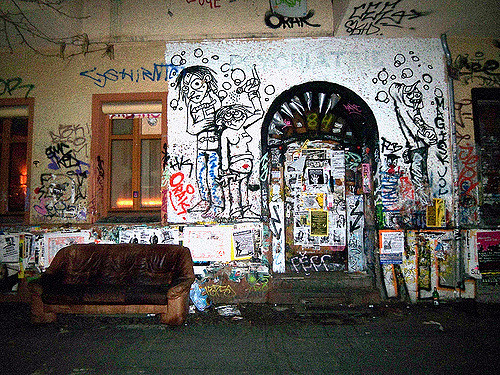