The Best Places To Catch Classical Music In Berlin 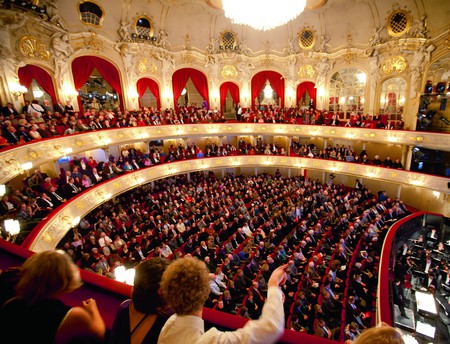 Right now is the perfect time of the year to get your fill of high culture and get some tickets for an opera or a classical concert, and some of the top orchestras from around the world make their home in Berlin.

When traveling to Berlin, experiencing classical music should be at the very top of your to-do list. With one-seventh of all opera houses in the world, Germany has much to offer the musically curious, but Berlin tops that by having three state-subsidized opera houses among several other concert halls that gather stars like Sir Simon Rattle, Daniel Barenboim, and Anna Netrebko under their roof. Not only are the people outstanding; the history of classical music in Berlin is some of the greatest. The Prussian kings have always had their own opera houses where they sponsored famous musicians of their time, and even the beautiful buildings like the state opera have a history to tell.

At the Staatsoper Berlin, one of the city’s very finest opera houses, guests are invited to sample some of the finest classical music in Germany.

Under Daniel Barenboim’s musical direction, the Staatsoper Berlin is famous for its outstanding performances of the challenging Wagner operas. It includes not only Wagner in its repertoire, but also Richard Strauss, Carl Maria von Weber, and Nikolai Rimsky Korsakov. Having one of the best orchestras in the world and the capacity to invite star singers for productions, the high quality of music that this house delivers is overwhelming. Performances are currently happening at the Schiller Theater, due to the construction and renovation of the beautiful opera house at Unter den Linden. The Staatsoper is also home to the State Ballet of Berlin.

Berliner Philharmoniker is probably the best symphonic orchestra in the world, playing in a concert hall with such outstanding acoustics, that it has been copied numerous times around the globe. It unites stars such as Emmanuel Pahud, Marie-Pierre Langlamet, Wenzel Fuchs, and Daishin Kashimoto under its roof, all of whom have international careers themselves. It is a historic event whenever this orchestra plays. Current chief conductor Sir Simon Rattle made a name for himself with his education program, and the orchestra’s annual concert at the Waldbühne sells around 20,000 tickets every year. The invention of a digital concert hall gives the audience the chance to experience live broadcasts of concerts, such as last New Year’s Eve show with violin star Anne-Sophie Mutter.

The Komische Oper is another jewel in the Berlin classical music crown. This opera house has quite a different story than the two previous listed. Appealing to the public by presenting classical music and opera in an entertaining and modern way, the Komische Oper focuses on humorous pieces such as La Belle Hélène or The Magic Flute, and even more modern productions — musicals such as West Side Story, for example — can be found on the schedule.

Konzerthausorchester is a wonderful symphonic orchestra that enjoys the privilege of calling the gorgeous Konzerthaus at the Gendarmenmarkt home and Ivan Fischer its chief conductor. The orchestra is full of surprises; just recently it announced several secret concerts at places all around the concert house which are usually never seen by the public, such as the piano storeroom. For everyone who wants to know how it really feels sitting in the middle of an orchestra, the Konzerthaus has a format called ‘Mittendrin.’ The seats for the audience are spread all among the orchestra, offering a completely perspective from which to experience the work of the musicians. It is extremely difficult for them to play together while spread all over the hall, but they somehow manage, which is definite proof for their extraordinary musical talent.

The outstanding work of the Deutsche Oper has definitely paid off; it has scored a Grammy-nomination in the category ‘Best Opera Recording’ for the DVD Jenufa. Operas from Verdi, Puccini, and Donizetti are the focus of its schedule this season, in stagings which appear quite avant-garde. The Deutsche Oper has recently been at the heart of rumors about a revival, in a five-year cycle, of work by the almost-forgotten opera composer Giacomo Meyerbeer. Another reason to pay the opera house a visit is the magnificent cast, featuring names like Thomas Hampson, Diana Damrau, and Heidi Melton, all among the top opera singers in the world.