The Most Decadent Vegan Desserts In Kreuzberg, Berlin 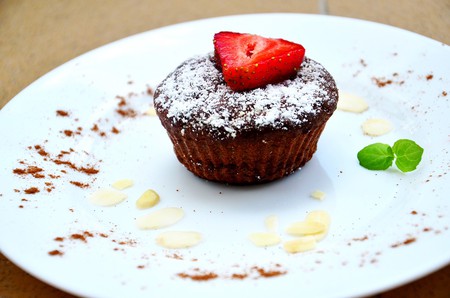 Berlin makes being vegan easier than just about any other city in Europe. With compelling vegan variations on everything from pizza to currywurst, it’s fitting that Kreuzberg, one of the city’s trendiest districts, would have delights for the vegan with a sweet tooth. Here are the most decadent vegan desserts in the neighborhood.

Brammibal’s Donuts in ‘Kreuzkölln‘ on Maybachufer has an ever-changing array of options including special varieties such as peanut butter honeycomb and regular varieties like maple bacon made with salted coconut. Brammibal’s Donuts are entirely vegan, and they often have gluten-free options available, too. These guys are known to make appearances at Markthalle Neun’s Street Food Thursday as well as other foodie events around the city.

PHEW! We had a crazy day and are sold out already, but new donuts will be available at 5. Come and get them while they are fresh. (Repost @twinkle_kriswanderlust )

Even vegans have to admit that ice cream is just pretty downright amazing. Luckily, Berlin makes finding this indulgent dessert in compelling vegan form quite easy. Head over to Tanne B, also located near Markthalle Neun, to enjoy vegan frozen treats, waffles, and pastries. Their ice creams are all flavored with natural ingredients, and come vibrant colors. Tanne B also serves savory vegan snacks and mains such as sandwiches, salads, and wraps. Find a spot on the terrace to enjoy some sun when the weather permits.
Eisenbahnstraße 48, Berlin, Germany +49 (0)30 69567811

Located in the bustling Bergmannkiez, Freckles is a charming vegan café that serves a wonderful array of cakes, cupcakes, brownies, and cinnamon buns. They also offer catering services and can even make your wedding cake. Some of their yummy cake flavorings include pistachio berry, chocolate nougat, chocolate peanut butter, speculoos, and more. They also make creamy vegetable soups and plenty of different coffee drinks to boot, making the whole coffee and cake thing of which Germans are so fond possible for even the most devout vegan. The café’s interior features rustic wooden furniture and mint green color accents.

Rootz Berlin is one of the more popular spots for vegan and vegetarian gastronomy in the city. They serve breakfast, lunch, and dinner highlighting casual American foods with Creole and Southwestern influences. They have a penchant for making yummy cakes and seasonal cupcakes, as well. For example, summer beckons strawberry shortcake made with plenty of vegan cream. The interior is spacious and welcoming, with parquet flooring and quirky décor like chairs with leopard print upholstery. 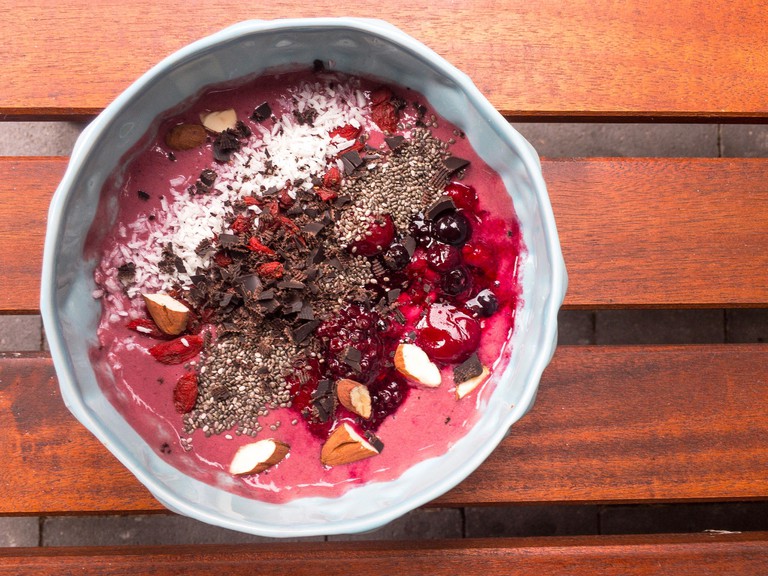 Acai bowl with chocolate, berries, almonds and coconut | © Marco Verch/ Flickr | © Marco Verch / Flickr
Situated just off of Urbanstraße at Kreuzberg’s southern end, no milk today is a dream of a place for the vegan or gluten-free person with a craving for something sweet. Named after the old song by Herman’s Hermits, everything at no milk today is made without milk, and most ingredients are organic and fair trade to boot. In addition to being vegan, plenty of their yummy cakes are raw and lots are gluten-free as well. For instance, the brownie cheesecake and the raw Snickers-inspired cake are entirely vegan and gluten-free. Everything is made from scratch, on site, with love. Let us also recommend their Vietnamese-style coffee, served with coconut milk.

Bistro, German, Vegan, Vegetarian
Facebook
Email
Twitter
Pinterest
Copy link
Share
Map View
As the name aptly suggests, Planet Veganus is a bistro whose dishes are entirely vegan, no exceptions. In addition to plenty of hearty vegan soups, salads, appetizers, sandwiches, and even döner kebabs, Planet Veganus is known for its scrumptious dessert menu. With items like Boston yoghurt brownie and apple crumble topped with plenty of cream, it isn’t uncommon to feel the need to double check with the waiter that everything is, in fact, vegan, but you heard it here first. The dessert selection changes often to make way for sweet seasonal options like the blueberry jam cake coated in almond shavings.
Give us feedback