The History Of The Molecule Man In 1 Minute 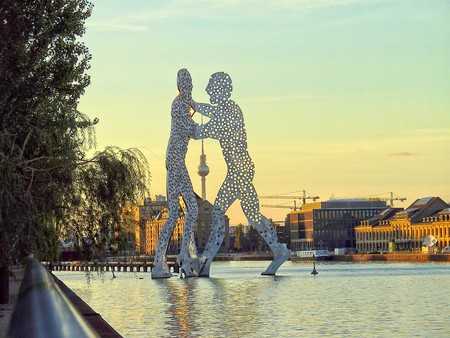 Molecule Man might as well be as infamous as the Fernsehrturm in terms of Berlin iconography. Unlike the Fernsehrturm, the Molecule Man wasn’t commissioned by the GDR. The stark structure fastened out of aluminum stands tall on the river Spree in front of the Treptowers and was built by the American sculptor Johnathon Borofsky.

The one lording over the Spree isn’t the only molecule man in existence. The first ones appeared in the late 70s in Los Angeles California. The one reigning over the Berlin river showed up in 1997. The sculpture consists of three (same but different) men all leaning into one another at a point of intersection; their arms are their means of integration. It’s representative of the meeting point of the neighboring localities: Kreuzberg, Friedrichshain, and Treptow. As these three kieze suffuse in the periphery of the Molecule Man, those who look upon the sculpture are reminded of its message: the coming together of many seemingly different elements to make up this existence. 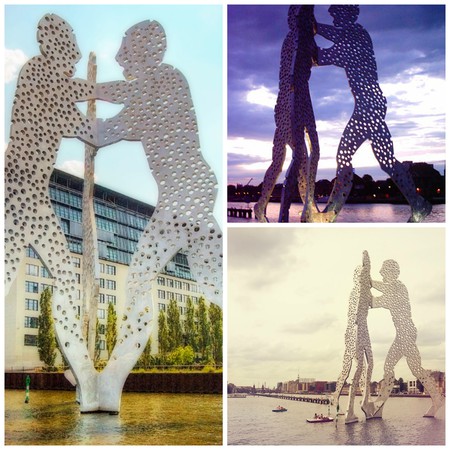 Due to the ever-changing sociopolitical climate, this structure will inevitably remain relevant and not just as a microcosm of a city’s ebbing and flowing ethnography. As Germany was once plagued with its own demarcation, this aluminum message reminds viewers the importance of integration. The seemingly endless amount of holes in the sculptor signify the molecules that comprise us all. Though each person may be different, they are made of the same molecules. The holes are also meant to delineate the lightness of our being, perhaps to articulate a humanistic vulnerability or fragility.

This epic sculptor stands 30 meters or 100 feet tall and instead of towering over its surroundings, it creates an uplifting atmosphere. Borofsky garnered inspiration for his body of work from a Sports Illustrated cover of two players rushing towards one another in celebration after winning the National Invitation Tournament. Borofsky started in Los Angeles 1978 and made his way across the globe with the others appearing in Yorkshire in 1988, Berlin 1997, and Council Bluffs Iowa in 2008.