The History of Jungfernbrücke In 1 Minute 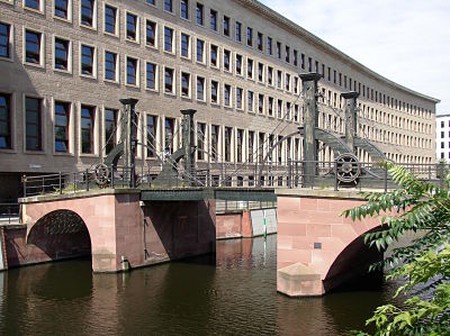 Jungfern Bridge is the oldest bridge in Berlin. It becomes quite clear when looking at it, this bridge is from a different time, it seems almost anachronistic now. Originally a part of a set of nine, it is now the last of its kind. Located in Berlin, Mitte it’s connects Friedrichsgracht and Oberwasserstraße.

The exact date of the bridge is unknown, but it is believed it was built in 1701 by Martin Grünberg during the reign of Friedrich Wilheim. Originally constructed as a wooden drawbridge, it later became necessary for the bridge to be remodeled with wood and iron, making it sturdier in 1798. In the early 20th century it underwent some changes due to the riverbed deepening, these changes disabled any sort of fluidity of the structure and rendered the folding mechanisms void. After the characteristics that qualified it as a drawbridge became inoperative, the bridge was then only used for pedestrians, and still is today. 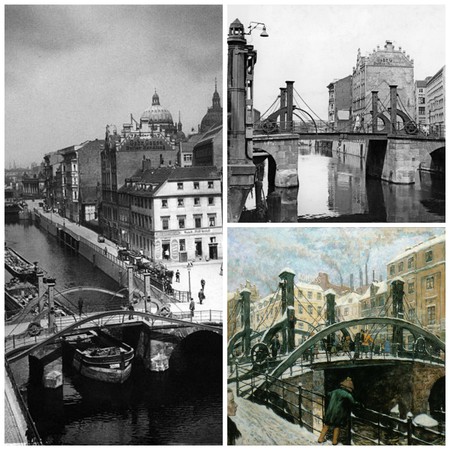 In the late 20th century it underwent some more facelifts. A historic monument, it was paramount for these renovations to take place. Between 1954 and 1999, it underwent a total of 4.1 million Deutsche Marks in renovations or the equivalent of just over €2 million today.With its picturesque location, it has been a focal point for tourists and artists like Hans Baluschek.

The German language includes lots of compound words. The first part, Jungfern, translates as virgin and the second part, brücke, translates as bridge. Before it was called Jungfernbrücke, it went by the name Spreegassenbrücke. It’s unclear why the name changed, but there are some theories. Popular ones include that the bridge was located near one of the first brothels in Berlin, or men testing the virginity of their wives by seeing if the planks creaked as she crossed. A more reasonable theory involves two French women who sold handmade crafts near the bridge and Berliners, at the time, attributed foreigners as ‘virgins’.