The Face Of Berlin Past and Present: An Interview With Bram Braam 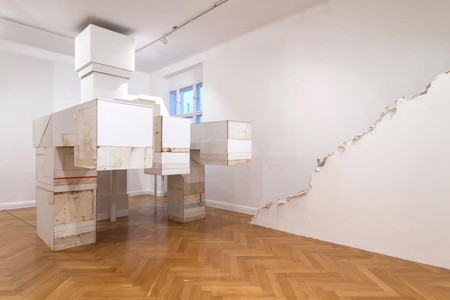 Artist Bram Braam, born in Sittard in the Netherlands, has now made a base in Berlin. In the ever-burgeoning Arts scene of the German capital, he creates sculptural and large-scale installations addressing architecture, the city, and urban space, inspired by architects of the Dutch De Stijl movement and with particular emphasis on the notion of Utopia. Looking forward, he investigates the architecture of today in order to reveal the transformations that will bring about the future face of the places we live in. The presence and influence of architecture from the past plays a pivotal role in shaping modern society, and in using Berlin as a reference point, this is something Braam dedicates his work to examining. 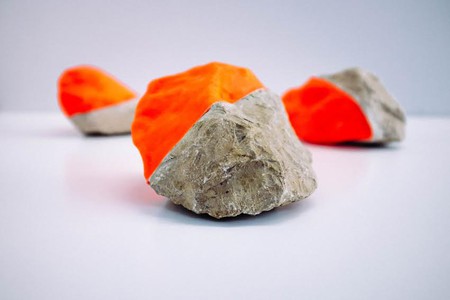 What inspired you to become an artist?

One thing I excelled at as a child was drawing and painting. I can remember that my parents took me to a Monet exhibition in Liege when I was 11 and inspired by the Monet works that I saw, I started painting in an Impressionist style with oil paint. It was clear from that point onwards that I was going to work in a creative field. I studied Communication and Design first, but the advertising world didn’t seem to be mine.

I started at the A.K.V. Sint Joost Art Academy in Den Bosch in the Netherlands. My idea was to develop myself as a set designer for theater, but I soon found out I would need to change direction again. In the first years of the academy I was painting a lot, but as the course progressed I realized that my sculptural works were better than my paintings, so I made a rigorous decision to quit painting and focus solely on my sculptural work.
You were born in the Netherlands and moved to Berlin. Would you say the move was made with an aim to gain better exposure and in search of a more vibrant artistic scene?

I moved to Berlin right after I graduated from Art Academy, where I received a one-year working grant from the Mondriaan Foundation. The roughness of the city had always attracted me because in a way it’s the opposite of many Dutch cities where everything is so well organized. Besides my interest in the architecture and the structure of the city, it was also a place to meet like-minded people. Berlin has a great Arts scene and this was what greatly influenced my decision to move there. 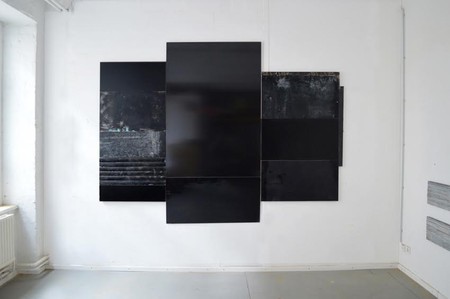 Much of your work is based on architecture and urban environments. Is the notion of public space and the evolution of modern environments always something that’s informed your work?

At the beginning of my work I was very interested in the Utopian thought of Dutch artist Constants Nieuwenhuys, with regards to his New Babylon and ideas about shaping a new world. I started to think deeply about city planning, landscapes, and the design of our environments. My works were then focused on the debate between the natural and cultural aspects of our environments, themes that I still work with.

To gain a better understanding of the way we built our cities (and their failures), I became interested in the modern history of architecture, the Garden City Movement, and how this eventually influenced architects like Le Corbusier. I admire the work of this great architect even though not all of his plans had the desired outcome. There’s still a big gap between great plans and reality.
What’s your opinion on trying to make it as a full-time artist these days?

I started quite late with Art Academy. When I finished I was 29, enthusiastic, and ambitious. As I was a little older I decided to take my art profession seriously from day one, and my goal was to be a full-time artist. Different funding programs from the Netherlands and Germany helped me during these years to make my goal a reality. They were not only important for the money, but they trusted in my work and that’s very important as an emerging artist.

During the past three years, I’ve been selling more work, which obviously makes life a little easier than depending on public funding alone, but to make this happen it’s only possible with the right mentality: being focused on the art and the works you want to make. You need to be in the studio every day, thinking about new ideas and realizing them. It’s important to always be networking, creating proposals for new projects, writing texts about your work as well as applying for funding. A strong discipline is required during both good and bad times. 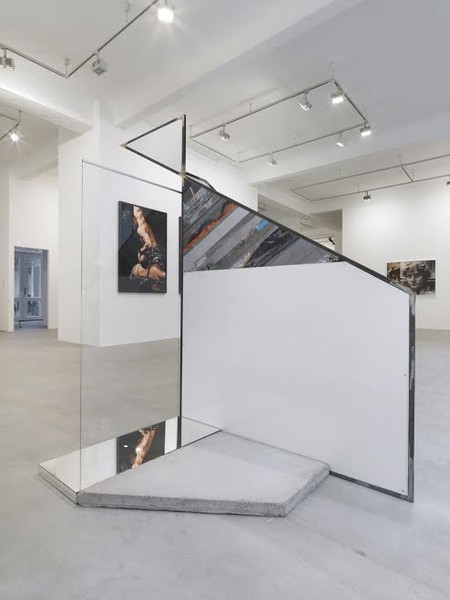 Would you say Berlin is one of the most creative places in the world? How important has it been to your development as an artist?

I think it’s coming close and if you look at the huge amount of art initiatives, project spaces, and pop-up exhibitions that are running alongside the regular offer of institutions, museums, and galleries, then it all adds up to a rich art scene. The many venues and volumes of people that are really interested in contemporary art provide a very stimulating environment to live in for an artist, but I think it only affects you in an indirect way. It’s nice to have so many opportunities and to see good exhibitions but my daily life is focused around my own studio and my own art practice, so, in that case, it doesn’t really matter where I am. On the other hand, Berlin is a great source of inspiration to make the works I’m making now. I’ve done projects in Scotland, Germany, and the Netherlands, but my focus in the last few years has been mainly on the environments of Berlin. I think it’s important to make work that’s really personal; a part of your identity needs to be reflected in your art.
Does your Dutch origin inform your work?

Yes, definitely, I think a lot of my work has its roots in the Netherlands. My interest in landscapes (and specifically in our designed landscapes) came out of a tradition from the Netherlands that goes way back. We fought for ages with the sea to protect our land, and we formed the land out of the sea. We’re famous for our flood-controlling dikes, a fight between man and nature.

The limited space and the small size of our country makes us perfect planners of each cubic centimeter, so it’s very structured and thought out, perhaps sometimes even a little too much. You can see this structural approach of arrangement back in our modernist style movement. De Stijl, Mondrian, van Doesburg, and Gerrit Rietveld are still icons that influence lots of (Dutch) artists including myself.
Your work Coordinating Traces in Berlin depicts walls that have become subject to wear and graffiti, highlighting memories inscribed on built environments. To me, this shows a real interest in street art, perhaps its ephemeral nature and the way in which it invades our environment. Is street art something you’ve taken an interest in? Berlin is, of course, one of the best places to enjoy it.

A lot of my artwork is themed around the impossibility to predict or control the evolution of our future and the development of our environments. I’m interested in chance occurrences, accidents, and coincidences that occur when people strive for perfection. These concepts are themes that run through all my work, from the failed modernist utopias to the imperfections in our street scenes. Street art and graffiti is uncontrolled, and mainly done without permission so it’s inherently set against the established order, and I think this is an interesting aspect. Graffiti artists are in effect taking their streets back from the establishment.

I always had a specific interest in walls, their various surfaces, and how they can work as a transmitter of time. I love the roughness of a city such as Berlin, where not everything is too polished or finished. I hope that it’ll keep its identity in the future and that it won’t slowly transform into a carbon copy of other major cities; so clean and boring. You can see this reflected in the surfaces of my work, and the contrast between the roughness of the streets and the hi-gloss Plexiglas.

Coming back to your question on street art/graffiti, it’s where my roots lie and I have a long history as a graffiti writer personally, although I’m not active anymore. I don’t really use my graffiti background in my art practice although its mentality and interests in urban environments are still connected in an abstract way. 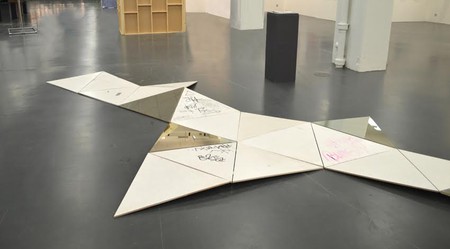 Your work that focuses on failed urban planning projects could be said to recall something of T.S. Eliot’s ‘The Waste Land’. Would you say your focus on these derelict areas is a way of making a more wide-sweeping comment on modern society, the zeitgeist, and the cycle of destruction and rebirth, as Eliot’s masterpiece does? Or is it a more simple appreciation of the power of these urban environments?

It is indeed a reflection on the zeitgeist from that moment. I’m interested in how visions of the past are still living in the present. Many understandings of hope and expectation came together in these modernist dreams in the 60s. In the end, it didn’t work out exactly as planned but it fascinates me to look back at these times and see what went wrong. While we’re living in a time where we look in a more cynical way to these master plans, there are still people looking for the new utopias which have to deal with the more temporary issues of our time as well as focusing on the ecologic aspects of our future; an example is the Master Plan for Masdar City by Norman Fosters, a CO2 neutral city in the Abu Dhabi desert. So, in a way, my work focuses on the power and influence of ideas of the past – right or wrong – on the current and future urban developments. 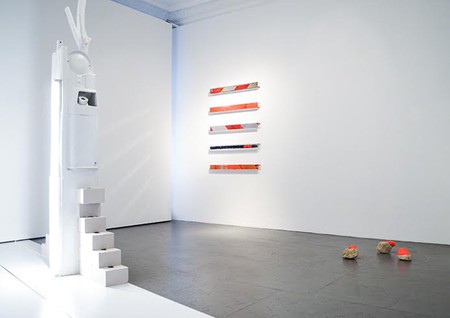 What can we expect from you in the future?

I recently got to hear that the Mondriaan foundation in the Netherlands has given me a working grant for proven talent for the next four years, which makes everything a lot easier. For my new projects, I’m working on the concept of hyper-reality, a philosophical term from the philosopher Jean Baudrillard, that states that works are dealing with our shifting perception of reality.

During Berlin’s art weeks I’m taking part in several exhibitions and in October I‘ll have my second solo exhibition at the Frank Taal gallery in Rotterdam (NL). It’s going to be a monumental exhibition with some large-scale installations and sculptures. I am also working towards an institutional exhibition in 2017 and will participate in some artist in residences. A lot is coming up so please stay informed about events on my website.
Interview by Henry Oliver