The Best Berlin-Based TV Shows You Must Watch 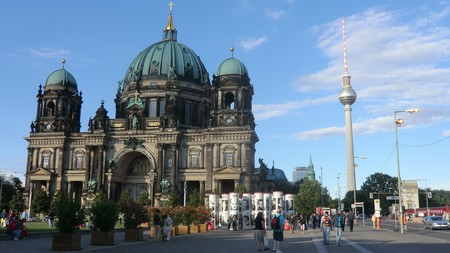 Berlin has become the backdrop for some seriously binge-worthy TV. From popular period dramas to spooky sci-fi series, Berlin is being explored and encapsulated in programs as diverse as the city itself. Here are the best Berlin-based TV series you have to check out.

Babylon Berlin is the most exciting and expensive German TV production to date. The popular show continues to make headlines across the globe, with its almost €40 million budget, stunning costume design and renowned directors Tom Tykwer, Achim von Borries and Henk Handloegten. The first two seasons are based on the crime novel The Wet Fish by Volker Kutscher, which follows the lives of actors, played by Volker Bruch and Liv Lisa Fries, through Berlin in the late-1920s. After the show’s huge success, Tykwer confirmed that two more seasons are planned.

Berlin Station follows Daniel Miller, played by Richard Armitage, who has just arrived in Berlin at the CIA’s foreign station. In the first season, Miller has a mission to uncover the sources of a leak who supplied information to a whistleblower. He’s partnered with a veteran agent, Hector DeJean, played by Rhys Ifans, who teaches Miller the dangerous world of a field agent. This season ends in climax after Miller is shot, and season two picks up from this point. It follows his recovery and new assignment infiltrating a far-right German political party. The series was renewed for a third season late last year.

Deutschland 86 is the second, yet to be released season, of Deutschland 83. The first eight-episode season, starring Jonas Nay, had an unusual success story, as it was largely ignored in Germany, but enjoyed huge popularity abroad. This secured the show’s second and third seasons. The show follows Nay, who plays a young East German spy sent to West Berlin to uncover secrets, assimilate and have a pretty wild ride. The second season will be released mid-2018, and there is no official trailer yet, but for those who need to catch up can check out the Deutschland 83 preview.

Ku’damm 59 is a German TV mini-series set in at the end of the 1950s in Berlin. Like Deutschland 86, the three-part series is the sequel to Ku’damm 56, and the story continues to follow Caterina Schöllack, played by Claudia Michelsen, a conservative mother and her three daughters, who are revolting against the outdated values of the time. In this sense, Ku’damm 59 largely follows the youth movement at the end of the 1950s.

Counterpart is an American sci-fi series set in Berlin. The series follows Howard Silk, played by Oscar winner J.K. Simmons, who has been working for a UN agency in the city. Calling Berlin home for thirty years, Howard has his world turned upside down when he discovers that his agency is actually in charge of a portal to a divergent parallel universe that was accidentally created by the East Germans during the Cold War. The first season follows this thrilling story, while a second season is currently being filmed in Berlin.

4 Blocks is the German answer to every American gangster movie and series. The drama series delves into the dark world of organized crime, family feuds and gang violence in Neukölln. This series will have you on the edge of your seat with can’t-look-away drama. Its second season is currently in production in the city, with an expected release later this year.

Sense8 follows the life of eight strangers, each from different cultures and countries, who are emotionally, physically and sensically linked after a mystical rebirth. The first series follows the eight strangers through their own tumultuous lives, and watches them as they grapple with their new ‘power’. There are many adversaries and conspiracies along the way, but there are also plenty of heartfelt moments to spur you along. Even though, like the other series, Sense8 isn’t set entirely in Berlin, one of the linked strangers, Wolfgang, is a Berliner, giving the city plenty of screen time.