The Apocalyptic Artwork Of AIDS 3D

AIDS 3D is a technology-based duo that makes media and internet artworks that interacts with its viewers. The diverse artworks that are exhibited under its banner deliberately entice us with their peculiarity. With AIDS 3D we find an amalgamation of technology, virtual data and social realities that emphatically collapse into each other – these are the self-professed concerns of Berlin-based artists, Daniel Keller and Nik Kosmas. 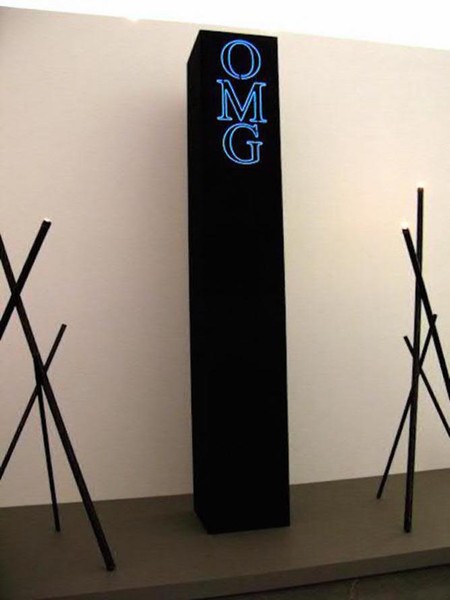 Kosmas and Keller’s interest in the tension between digital and tangible material is exemplified in nearly all of their work. Their OMG Obelisk – an incarnation of the digital realm’s language – first brought AIDS 3D to the attention of the public in 2009. This fun and flashy object embodies what Keller and Kosmas stand for, paying heed to the pervasiveness and power of technology in modern society. This is evidenced by its impact on the language of social exchange; being a conveyor of technology and a comment on the social world at the same time, it satirizes the expression ‘OMG’ and the digital world to which it belongs. It is clever work.

AIDS 3D is not without potentially controversial implications, though, which Keller and Kosmas openly embrace. The most conspicuous controversy lies in the duplicitous meaning of their acronym that conjures notions of the disease and, at the same time, AID(S) – as a collective relief effort. These seemingly polarized but directly interlocking concepts anticipate the humanitarian awareness and activism incorporated into AIDS 3D’s philosophy. They are also indicative of their fascination with the possibility of imminent universal apocalypse, which AIDS 3D anticipates as being potentially realized in the light of our technology obsession and post-human dialectics.

Social concerns affect AIDS 3D on a microcosmic level; much of their work, such as the World Community Grid Water Features (2010 – 2012), concentrates on producing oeuvres that satisfy the need for utility. The Water Features incorporate an energy efficient PC, which donates unused computer time to humanitarian causes when the fountains were plugged in.

It’s all very neat. But what is even neater is that the words AIDS 3D were themselves randomly generated by technology. So Keller and Kosmas’ insistence on incorporating technology into their art and exploring the pervasiveness of technology is self-validating. If we accept that technology (and its capacity for containing and communicating information) is a dominating presence in contemporary society, we should thank AIDS 3D for producing technology-concentrated art.