The Most Impressive Buildings in Berlin 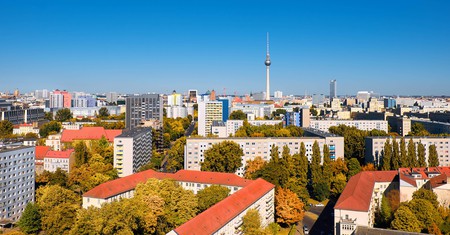 Berlin was devastated during World War II, but the city has since been rebuilding itself on the ruins of the past. The capital is now home to some impressive feats of Modernist architecture, from Brutalist to Bauhaus, and it has ushered in a new era of utopian aesthetics and Postmodern design. Discover these treasures of Berlin’s modern architectural landscape. 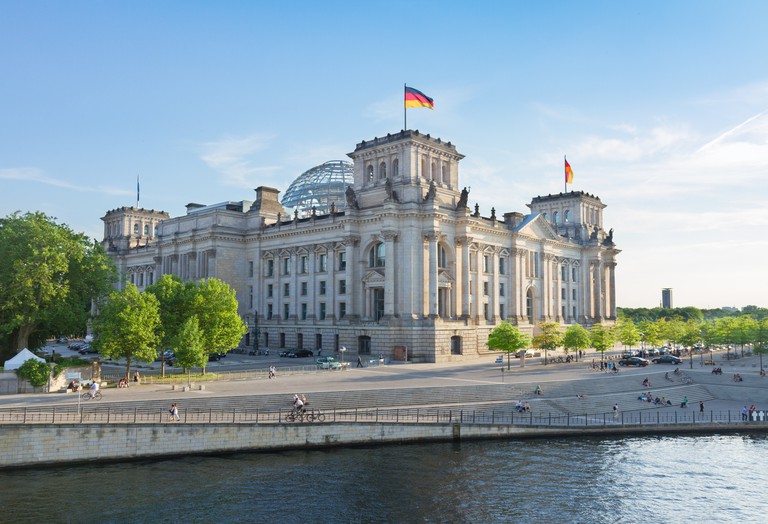 The Reichstag is the home of the German parliament | © Neirfy / Shutterstock
Book Now
Tucked away behind the imposing facade of this 19th-century building is one of the Reichstag’s most impressive features, albeit a contemporary one. A free guided tour will take you up to the top of a spectacular glass dome, designed by Norman Foster in 1999 as part of a huge renovation project, which offers 360-degree views of the parliamentary and government district of Berlin. The original building suffered greatly in the early half of the 20th century, damaged by a mysterious fire in 1933 and then attacked by air raids during World War II. The building also became a key target for the Red Army during the 1945 Battle of Berlin, given its political significance – to this day, visitors can see Soviet graffiti emblazoned on its smoky walls.
Open In Google Maps
1 Platz der Republik, Mitte Berlin, Berlin, 11011, Germany
+493022732152
Visit Website
Give us feedback 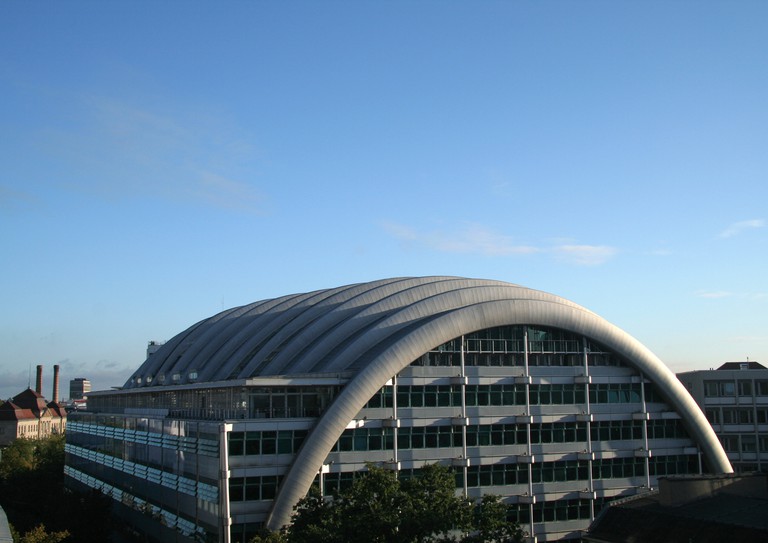 The Ludwig-Erhard-Haus was designed by British architect Sir Nicholas Grimshaw | © Andy Christiani / Alamy Stock Photo
Nicknamed the Armadillo due to its armoury-style steel-clad roof, this futuristic Postmodernist conference and office building was designed by British architect Sir Nicholas Grimshaw in the mid-1990s. The atrium of the high-tech building is just as likely to feature in a sci-fi thriller as it is to play host to the Berlin Stock Exchange, with its dramatic ribcage of steel and elevator capsules with orange-tinted windows.
Open In Google Maps
85 Fasanenstraße, Bezirk Charlottenburg-Wilmersdorf Berlin, Berlin, 10623, Germany
+4930315100
Visit Website
Give us feedback 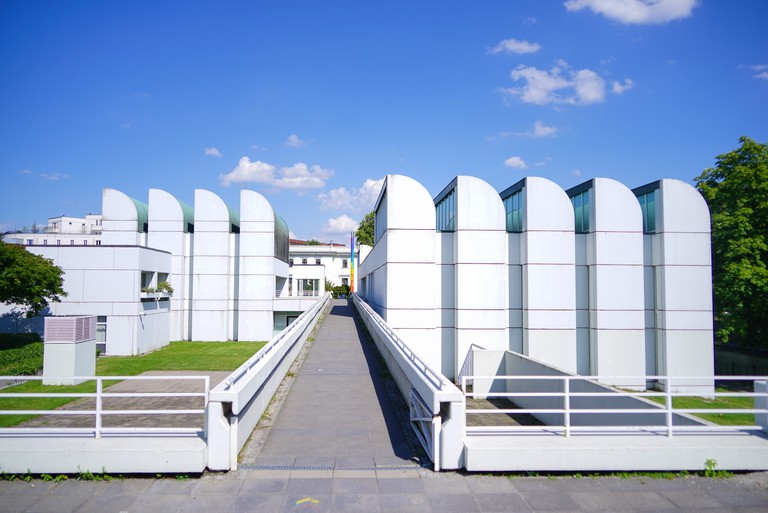 The Bauhaus-Archiv was completed in 1979 | © Peter Delius / Alamy Stock Photo
Walter Gropius founded the Bauhaus school in 1919 – one of the 20th century’s most influential art and design institutions. It attempted to rebuild war-ravaged Germany through a pioneering approach to architecture, crafts and fine arts. Given the school’s prolific work, it was eventually decided that the extensive archive collection was deserving of its own home, so Gropius drew up a design intended to provide “a vivid encounter with the Bauhaus”. The building was completed in 1979, which was a drastic modification of Gropius’s original proposal, but his distinctive sawtooth roof was retained in the final design. The Bauhaus-Archiv was listed as a protected monument in 1997, becoming one of Berlin’s most important architectural institutions, and is currently undergoing an extensive expansion project. The new “glittering gem” of an extension will add 2,300 square metres (24,750 square feet) of exhibition space and is due to be completed in 2022. The museum is currently closed while work is underway, but a temporary space is open in Berlin’s Charlottenburg district.
Open In Google Maps
14 Klingelhöferstraße, Berlin, 10785, Germany
+49302540020
Give us feedback 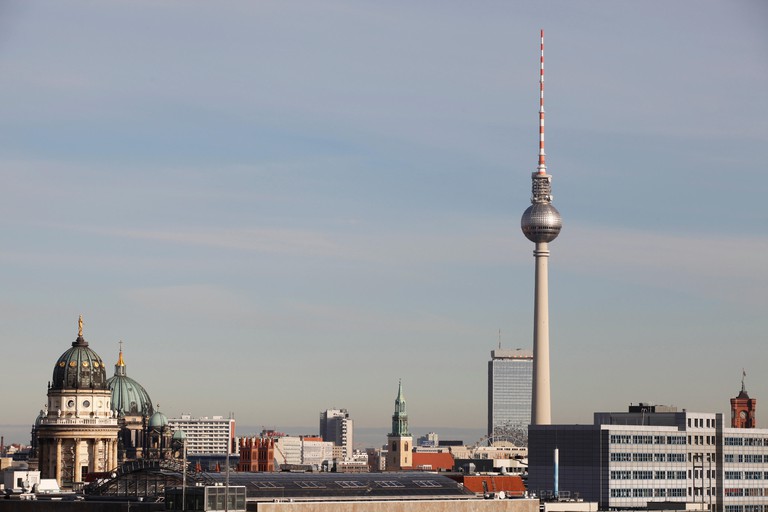 The Berlin TV Tower (Berliner Fernsehturm) looms large on the city’s skyline | © hanohikirf / Alamy Stock Photo
Book Now
It would be hard to miss Berlin’s famous TV Tower (Berliner Fernsehturm), which pierces the city’s skyline at 368 metres (1,207 feet). The tallest building in the capital, the 1960s tower is a unique landmark of a unified Berlin and an iconic symbol of Communist power, drawing in more than a million visitors every year. Located near Alexanderplatz, the TV Tower also operates as a viewing tower and rotating restaurant, with an observation deck that offers unbeatable panoramic views of the city.
Open In Google Maps
1A Panoramastraße, Mitte Berlin, Berlin, 10178, Germany
+4930247575875
Visit Website
Give us feedback 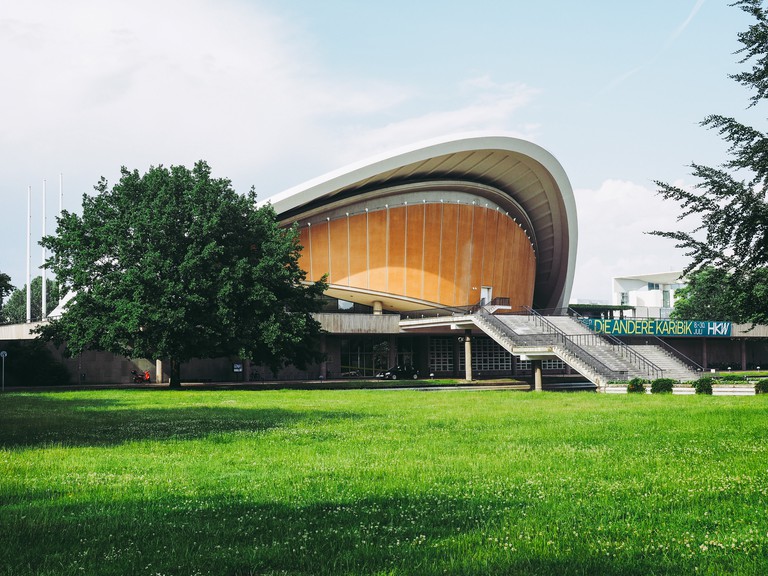 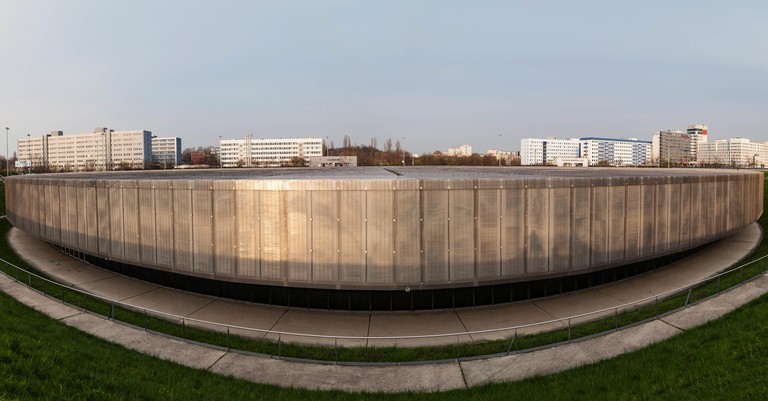 Berlin’s Velodrom is one of the city’s primary indoor track and cycling facilities | © creativep / Alamy Stock Photo
French architect Dominique Perrault won the German Award for Architecture for this impressive disc-shaped design, which looks like a UFO that has suddenly descended on Prenzlauer Berg. Featuring Europe’s largest steel roof, the 1999 Velodrom is one of Berlin’s primary indoor track and cycling facilities – it also includes an Olympic swimming pool and serves as the city’s largest concert venue.
Open In Google Maps
26 Paul-Heyse-Straße, Bezirk Pankow Berlin, Berlin, 10407, Germany
+4930443045
Visit Website
Give us feedback 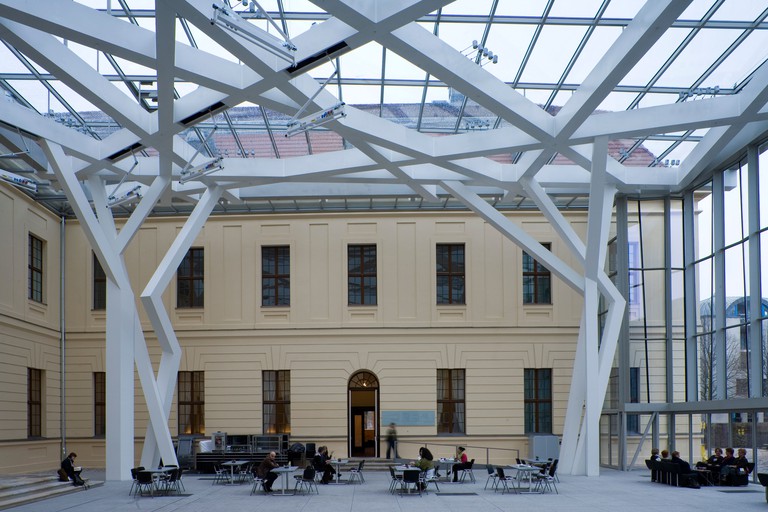 The Jewish Museum is one of the largest museums of Jewish culture and history in Europe, exploring nearly two millennia of German-Jewish society. The building itself is equally noteworthy, consisting of two main structures: an older, Baroque palace that has been supplemented by a zinc-panelled monolith of an extension designed by Polish-American architect Daniel Libeskind. The 2001 extension is symbolically rich, with empty “voids” appearing regularly throughout the building to represent, in Libeskind’s words, “that which can never be exhibited when it comes to Jewish Berlin history: humanity reduced to ashes”. 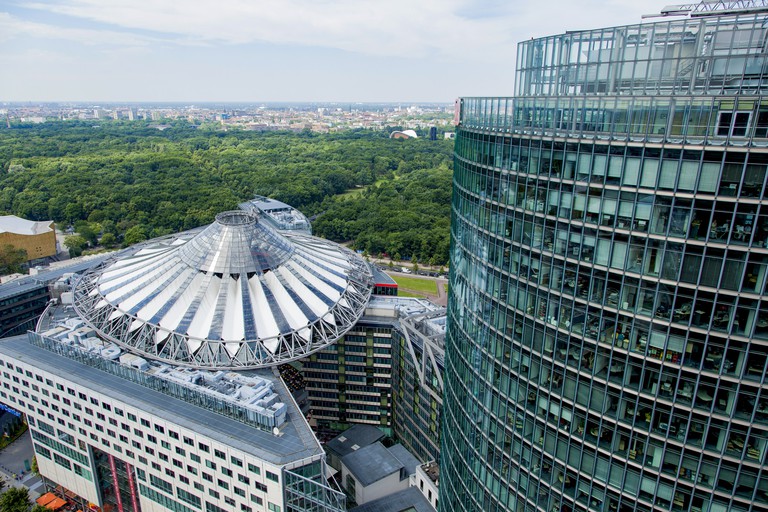 Buildings designed by architects Renzo Piano and Richard Rogers stand in Potsdamer Platz | © elbud / Shutterstock
Potsdamer Platz hasn’t always been a thriving metropolitan hub of high-rise skyscrapers. Before the reunification, the Berlin Wall cut through the heart of this former wasteland, which was utterly obliterated during World War II and then left as a no man’s land during the Cold War era. After 1990, the square became Europe’s largest building site. It was designed to be a healing link between East and West, reconnecting the two halves of the city through an exciting new commercial centre, with the likes of Renzo Piano and Richard Rogers creating impressive Postmodern landmarks. The Daimler-Benz complex was overseen by Piano, which was the largest of four key developments with 19 buildings erected, while the second largest was the Sony Center – a striking monolith of glass and steel topped with a spectacular circus tent-style roof.
Open In Google Maps
Potsdamer Platz, Mitte Berlin, Berlin, 10785, Germany
Visit Website
Give us feedback 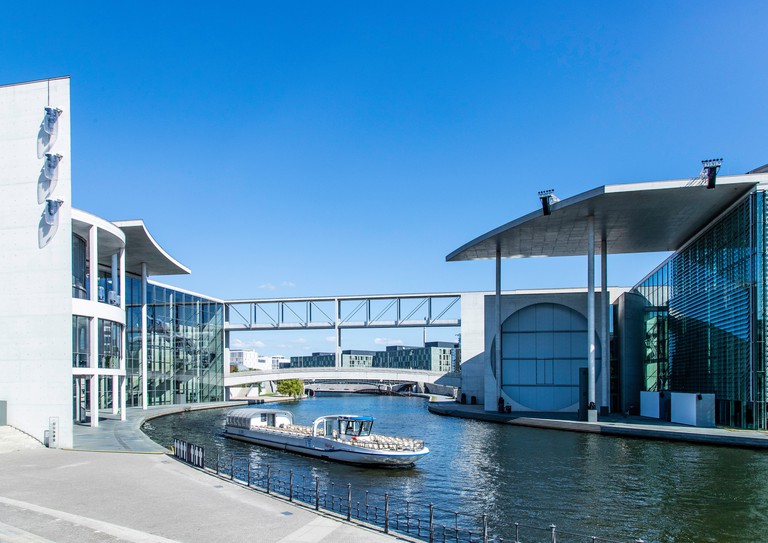 The Marie-Elisabeth-Lüders-Haus is situated along the River Spree | © Russell Millner / Alamy Stock Photo
Marie Elisabeth Lüders was a celebrated German women’s rights activist and politician, and the building that bears her name is part of the city’s parliamentary complex. It was completed in 2003 and designed by Stephan Braunfels, who calls it his “biggest and most beautiful building”. The Modernist-style masterpiece, which is one of the largest scale projects in post-Cold War Germany, recalls the imposing concrete structures of Berlin’s Socialist era. Situated right on the River Spree with walkways surrounding the complex, it’s one of the best spots in the city for a stroll on a summer evening.
Open In Google Maps
1 Adele-Schreiber-Krieger-Straße, Mitte Berlin, Berlin, 10117, Germany
+49302270
Visit Website
Give us feedback
Give us feedback