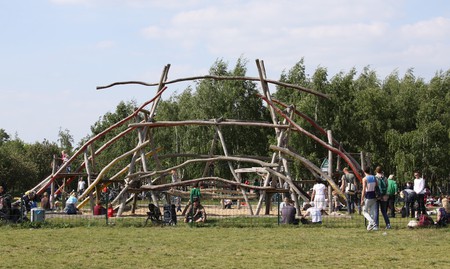 With Berlin’s population booming, it should be no surprise that many places cater to the city’s newest generation, and each neighbourhood of has its own entertainment centre that is more than baby friendly. Check out some of Berlin’s most creative and alluring places that are enjoyable (and affordable)for both parents and toddlers alike.

To stimulate and expand your child’s imagination, ride through the enormous aquarium tank at AquaDom and witness Moses splitting the Read Sea from a modern, 21st-century elevator. With the same pass, explore the Sea Life building to find yourself surrounded by magnificent sea creatures (some you may have never known existed) or catch a daily feeding session. Bear in mind, tickets here can get quite pricey. 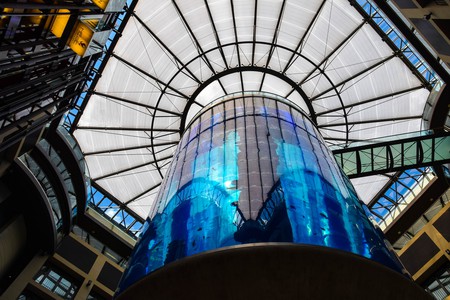 For a , Bim & Boom is a large indoor playground and a great place for kids to safely run around in. Try eating a nice lunch before going, though, as the in-house food can get pretty pricey and the selection limited.

Zoo Berlin (one of the oldest, largest and most popular in the world) is home to almost 20,000 animals – a challenging amount to fathom. Visit Fatou the gorilla and Bao Bao the giant panda as well as Asian elephants, bears and thousands of other animal. The zoo is right next to Tiergarten, which makes planning an entire kid-friendly day until bedtime a cinch. 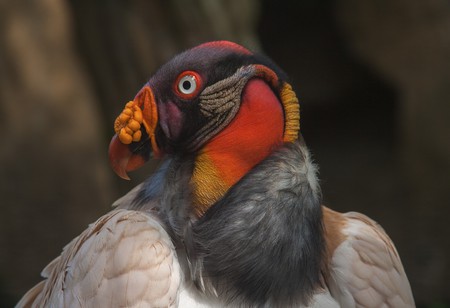 For a relaxing, fun and free activity, spend a day wander around Tiergarten, one of Germany’s largest parks, to explore sculptures, streams and birds. Spanning a whopping 520 acres, Tiergarten is even big enough to choose between having a laid-back picnic in the park – with drinks, music, balloons, Frisbees or any other outdoor activity – or finding a nicely secluded area for some quiet time. Plus, this central location puts visitors right next to Berlin’s most landmark monuments (such as Brandenburg Gate and Potsdamer Platz). 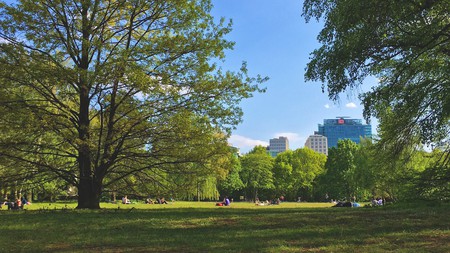 Similar to East Berlin’s Bim & Boom, Bambooland is an indoor playground with trampolines, climbing labyrinths, a bounce house and (most importantly) a jungle theme. This toddler paradise in Berlin’s far west Spandau is open every day, making it a good rainy day activity.

Journey through the Science Center Spectrum and discover noise experiments with the push of a button (many buttons, actually). Little, little ones will enjoy the wonderful tactile activity, and time can be taken to explain each experiment, colour, light and sound to older children. Explore water experiments, a mirror room, weights for kids, building blocks and much more. Two small tips: make sure to check coats and bags before entering, and eat breakfast or lunch beforehand because selections are limited to just snacks.

Only in Berlin for a short time and want to squeeze in a fun day for the kids? Labyrinth Kindermeusem, one of Berlin’s leading museums for kids, hosts activities for little ones on every floor. This indoor playground in Wedding and is a shoe-free zone of climbing, running, crawling and jumping, and a small café and eating area welcomes bringing your own food and snacks. (Please note that Labyrinth Kindermuseum is closed Wednesdays and Thursdays.) 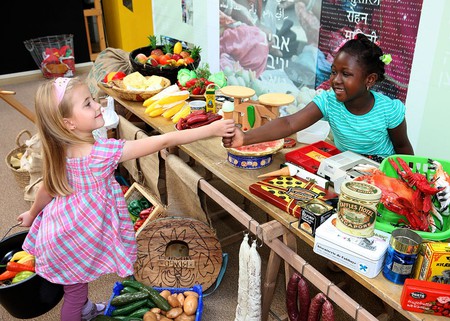 On the hunt for a place offering both indoor and outdoor activities? Then FEZ is a can’t-miss. FEZ is fancifully decorated with stylised outdoor playgrounds, a steam train, and structures to climb over and into. Indoors are soft play areas (always good for toddlers) and a climbing wall, as well as daily or monthly coordinated events. Bonus: entrance to the outdoor park is free. 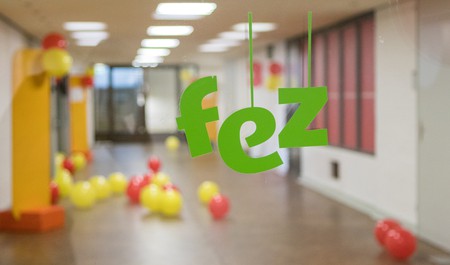 Many call it a Kinder café, but Amitola is as much for the parents as for children. This café corner sells new and used clothes (supporting Berlin’s values of anti-commercialism) and features a small slide and climbing area for the kids to play in while adults parents eat and watch close by. Theatre shows on Sundays also allow parents to hang out whilst the kids enjoy themselves. 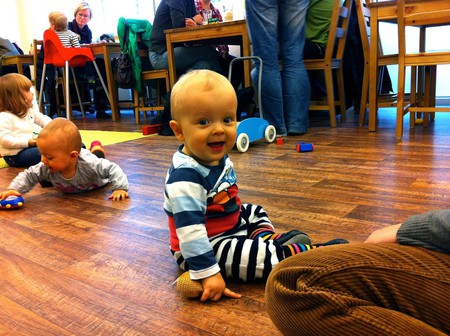 A simple S-Bahn train out of Berlin’s city centre out to Potsdam is Biosphere Potsdam. Delve into its jungle landscape and discover different plants, herbs, animals, insects, birds and even a scheduled thunderstorm. 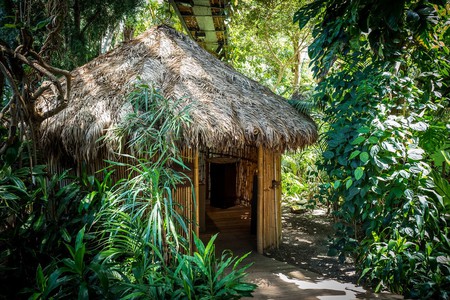 Gleisdreieck, under renovation for many years, finally opened with a variety of playgrounds. Watch the S-Bahn slide over the skyline as you and your child fly on one of the many swings, slides or seesaws. Gleisdreieck is right between Mitte, Kreuzberg and Schoeneberg, making it a favourite amongst locals. 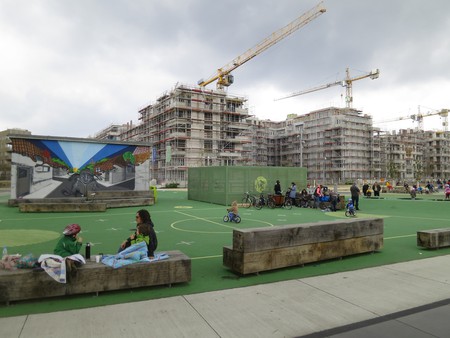 A day by the lake

One of Berlin’s very many special features is the sheer amount of lakes along the S-Bahn. In the summertime, pay a small fee to enter one of the sand- and snack-filled ‘beaches’, or act like a local and find a DIY entrance to the water and find your own space in the grass. Even when it’s not warm enough to swim, lakes are still a nice place for pleasant strolls and possible picnics. 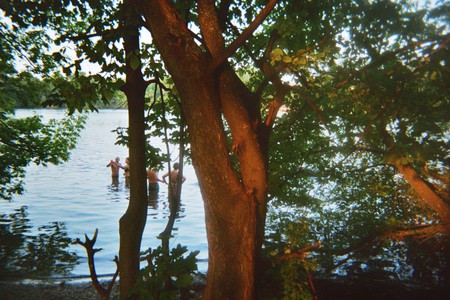 Tired of going to the ATM for cash? Opt to visit Berlin’s libraries. These comfy reading areas are kid friendly and have small English-language children’s sections. Bibliothek am Wasserturm (Water Tower Library) offers an especially cosy reading area for discovering both new and classic German texts. Sometimes we forget the simplest, most obvious options, but they’re always there waiting for us.

Berlin is filled with shocking playgrounds that can exceed even artists’ imaginations: check out Dragon Park in Friedrichshain, Witch Playground or Playground Indiana Bones – there’s no making this stuff up. Inside many of the parks you can also find a free petting zoo where you can feed the goats, ride a pony, or simply take a look at some the exotic birds or bunnies they have on campus. 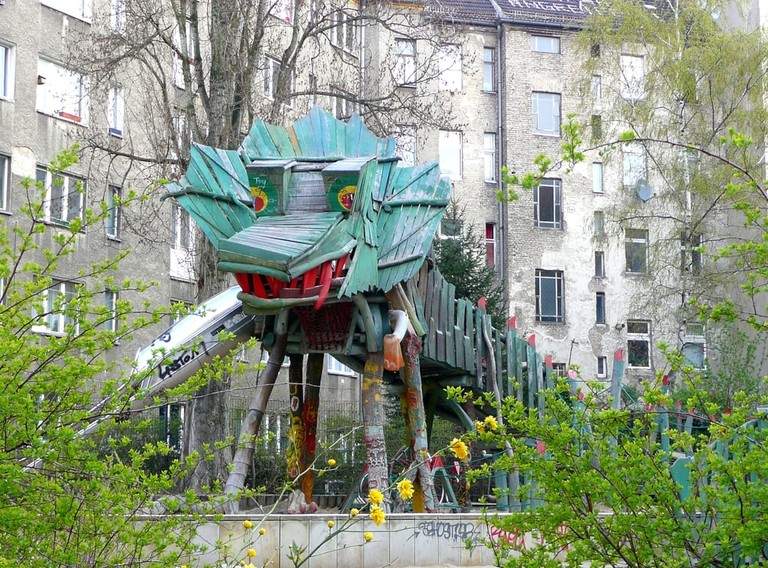 Besides for spending the day by a lake on a sunny summer day, you should also spend some time in one of Berlin’s waterparks filled with other enthusiastic children from all parts of the world. Close to the end of Treptower Park is Plansche im Plaenterwald with high shooting fountains for the kids to run around in. Don’t be surprised if most of the kids are naked, it’s another way the city perpetuates its free-spirited nature.