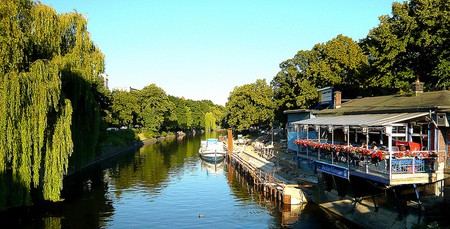 With summertime in full swing, we are reminded why we love Berlin enough to rough it through its brutal winters. Beat the heat and make the most of the beautiful weather and laid-back vibes of the city by hanging out at Berlin’s most picturesque waterside spots. Not sure where to head first? We’ve got you covered with these 10 most glorious places.

The famed Badeschiff is one of Berlin’s best riverside bars. In addition to cold ones, yoga classes, and great views, what sets Badeschiff apart is its pool, which is literally situated right in the Spree. Take a dip in the midst of some of Berlin’s most iconic sights like the Molecule Man, Oberbaumbrücke, and the TV Tower. The sandy outdoor terrain and rustic wooden décor create the perfect beach-themed vibe without ever requiring you to leave the city proper.

For those looking to cool off in true Berliner fashion, one of the best ways to do it is to gather some friends, stop by the nearest Späti for a couple of beers, and then find a nice grassy spot in the shade. The easiest neighborhood in the city to do so is Kreuzberg, and there are a few extra special spots on the canal for hanging out. Paul-Lincke-Ufer and Maybachufer run parallel to each other on either side of the canal. Paul-Lincke-Ufer offers lots of fantastic restaurants with leafy terraces as well as plenty places for relaxing by the water. Across the way on Maybachufer, there you will find the bustling Türkenmarkt where vendors sell street foods, produce, and all sorts of merchandise.

Just a bit further down the canal, Böcklerpark is another wonderful place to enjoy summer in the city like a local. Near one of the hippest parts of Kreuzberg, this small but lush green space contains enormous weeping willows, which makes it hard to miss. Swans typically glide over the water’s surface, a detail that only enhances the serenity of this quiet spot.

Perched on a tributary canal near the Spree, Club der Visionaere is a crucial stop for anyone looking to explore Berlin’s abundant nightlife. Its wooden terrace is draped with weeping willows, which are illuminated in technicolor lights. The club gets packed during the peak hours of evening so we recommend going on off-times for a good spot by the water. CDV hosts live electronic music at night, making it a fun place to kick off an evening of dancing.

Treptower Park is one of Berlin’s most prominent parks, largely known for the enormous Soviet War Memorial located inside. The park has plenty to offer beyond this, however. The entire northeastern portion consists of a promenade situated along the Spree, making it an excellent place for a riverside picnic or bike ride when the weather permits. A favorite spot in the park among the locals is Insel der Jugend, a small island with exceptional views of the water and surrounding landscape. Plus, the park is completely dog friendly.

For many, a trip to Treptower Park requires passing over the bridge, Elsenbrücke, in order to cross the river Spree. Therefore, we suggest taking a second to appreciate the phenomenal views that accompany it. The Molecule Man Sculpture is located on the western side of the bridge, making it one of the best vantage points in the city for viewing it. Elsenbrücke also provides a good view of the city’s most historic bridge, Oberbaumbrücke, which connects Kreuzberg and Friedrichshain. The TV Tower also stands magnificently in the distance. Elsenbrücke serves as an excellent place for watching the sun set over the river.

Situated in Berlin’s governmental quarter as part of the capital’s parliamentary complex, Marie-Elisabeth-Lüders House is a commemorative building that contains the scientific service center of Germany’s parliament. It is named after Marie Elisabeth Lüders, a social reformer and women’s rights activist. This ultra-contemporary architectural masterpiece is located right on the Spree. Its surface area is largely comprised of glass, which reflects the surrounding atmosphere, literally reflecting the beauty of the scenery in its façade. This spot is an especially peaceful place to explore in the evenings. 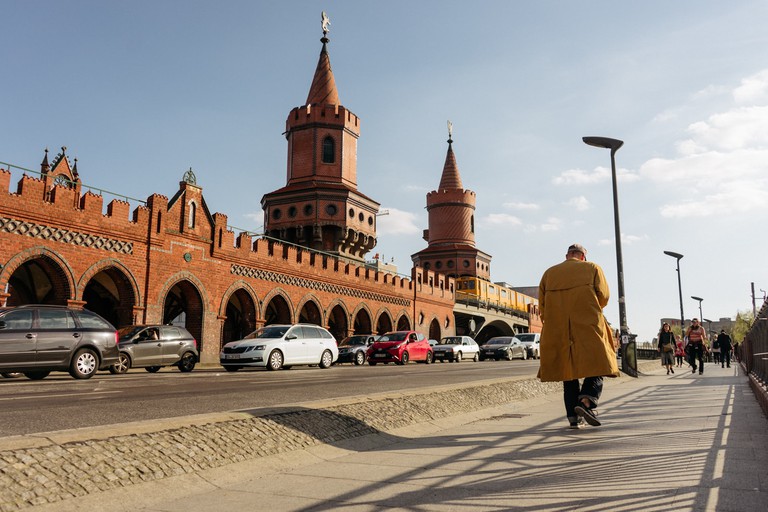 Kacie Loura / | © Culture Trip
Built in 1895, the double-decker Oberbaum Bridge is one of Berlin’s oldest and most recognizable landmarks thanks to its reddish coloring and two large medieval style turrets. Oberbaumbrücke served as a checkpoint between East and West during the Cold War. Nowadays, it stands as an emblem of Berlin’s unity as it links Kreuzberg and Friedrichshain, thus forming a symbolic connection between East and West in a city that was notoriously divided. Many street performers set up shop in here, and its seven successive archways in this red brick bridge frame the horizon for pedestrians passing through.

It’s impossible to talk about Berlin’s many waterside retreats without mentioning at least a couple of the many nearby lakes, which serve as the ideal retreat from the stifling heat on summer days. Located southeast of the city, Langer See and its surrounding forests promise plenty of soft grassy spots for relaxing in and out of the sun. Langer See has relatively pristine natural surroundings, and it is also dog-friendly. This lake is easily accessible from the city by tram.

Müggelsee is Berlin’s largest lake, and it is located in the city’s eastern suburbs. It is one of the best spots not only for swimming, but for hiking and boating as well, thanks to its size. Rental canoes and other watercrafts are also available on the premises. For any history buffs among you, visit the Museum im Wasserwerk at the northern shore of the lake. The museum offers an extensive history of Berlin’s water works and municipal drainage system. Müggelsee is one of the most visited lakes in the summer months, but there are three different designated bathing areas, so don’t let its popularity be a deterrent.