Peter Behrens is one of the most influential 20th-century German architects. At the beginning of the century, Behrens made a name for himself by producing outstanding works in painting, architecture, graphic design, and industrial design. His work had such an important influence in these fields that they opened up uncharted territory for the generations to come. Behrens is recognized as the founder of modern objective industrial architecture and modern industrial design. 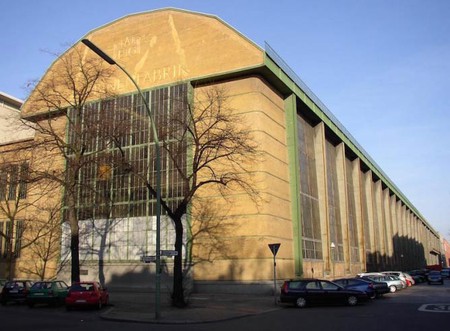 Peter Behrens was born on April 14, 1868 in Hamburg, Germany, and died on February 27, 1940 in Berlin. He studied at the Hamburg Kunstgewerbeschule (School for the Applied Arts) from 1886 to 1889 before attending the Kunstschule in Karlsruhe and the Düsseldorf Art Academy. From 1890 he worked as a painter and graphic artist in Munich, where he joined the Jugendstil movement, and in 1893 he was a founding member of the Munich Secession. Behrens was prominent in the modernist movement and influenced several of the movement’s leading names in the earlier stages of their careers. In 1899 Behrens designed and built his first house in Darmstadt. The architecture and furnishings of ‘Haus Behrens’ caused quite a stir.

Behrens’ best known work is the AEG Turbine Hall which was built around 1909 in Berlin’s Moabit district. The factory is known as an influential example of industrial architecture, with its revolutionary design featuring 100m long and 15m tall glass and steel walls on either side. His design of the AEG Turbine Hall was a bold move and a world first. The building’s architecture went on to have a durable impact on the field of architecture worldwide.

Before it became the AEG turbine factory, the site had been occupied since 1892 by the electrical company founded by August Thyssen and the Thomson Houston Electric Company, the Union-Elektricitäts-Gesellschaft (UEG). The UEG aimed to reap success through the booming electric industry by producing electrical trams, however the company quickly encountered financial difficulties, and the Allgemeine Elektricitäts-Gesellschaft (AEG) took over in 1904 with plans for the construction of a new turbine factory, as the existing factory had become too small for its operations.

The AEG was founded by Emil Rathenau in 1887 and soon became Germany’s equivalent of General Electric in the United States, producing a broad range of devices such as generators, appliances, and light bulbs. In 1907 the AEG hired Peter Behrens as its overall artistic consultant. Behrens was soon in charge of the overall appearance of the company and designed everything from products and buildings to advertising and logos. He created the first integrated corporate identity.

Also in 1907, Peter Behrens founded a large architectural and design practice in Berlin, where he worked with Walter Gropius, Ludwig Mies van der Rohe, and Le Corbusier. This joint studio was very productive, boasting numerous architectural commissions, including the German embassy in St. Petersburg (1911-12), and was critical in demonstrating the influence of expressionism on architecture.

In 1909, after working for two years as AEG’s artistic consultant, AEG decided to add steam turbines to its product list. Behrens was commissioned with the construction of the AEG Turbine Hall and was appointed lead architect of the project. The original building measures 25.6m + 12.5m in width with a height of 25m and a length of 123m. The building went up in less than a year, and it was a revolutionary structure made entirely of iron, concrete, and glass. The AEG Turbine Hall marked the start of a new industrial aesthetic of minimalist designs. Behrens had created an architecture for industry that no longer had to hide behind historic facades. Instead it was transformed, bringing with it a new self-confidence. This was a completely new concept in an age in where a neo-gothic, neo-classical style was deemed appropriate for this type of building. 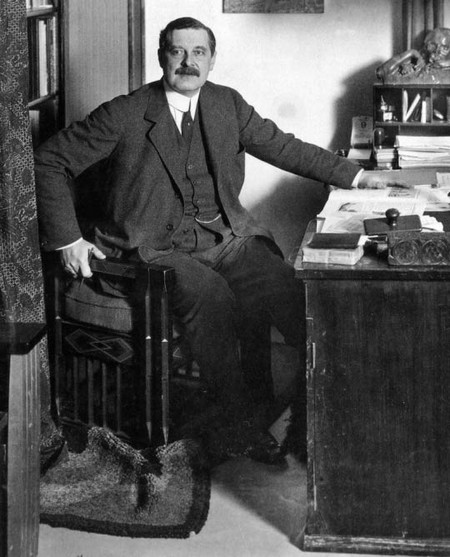 Peter Behrens around 1913 in his office in Berlin | ©Tmtriumph/WikiCommons

The factory produced steam turbines until World War II when the Nazis converted its production to armaments, and the AEG exploited slave laborers. Wartime bombing blew out its windows but did not seriously damage the building or interrupt production. At the end of the war, the Turbine Hall was within the boundaries of the new West Berlin, in the British sector, and the AEG was permitted to resume making turbines. In 1956 the hall was the first industrial building in Germany to become an historic landmark. It was taken over by Siemens in 1977, and to this day the factory still performs its original function of turbine production, now issuing gas rather than steam turbines.

The building underwent a restoration in 1978. Hubert Starost, 57, a preservationist with the Berlin Monument Authority, recently spoke about the factory during a tour, saying ‘the AEG Turbine Hall is absolutely exceptional. I know of very few examples anywhere of an industrial building that is still performing its original function, with almost no modification, after a century.’

Today, photos of the exterior of the AEG Turbine Hall are found in nearly every book on architectural history. After the success of his design of the AEG Turbine Hall, Behren’s went on to design ‘New Ways’ in 1926, a private dwelling in Northampton, which is regarded as an early example of International Modern style. He also designed china, glass objects, and patterned linoleum flooring for various companies. One of his last commissions, in 1938, was to plan new AEG headquarters in Berlin. For the rest of his life he was head of the architecture department at the Preußische Akademie der Künste (Prussian Academy of Arts) in Berlin.