Parov Stelar: The Father Of Electro-Swing Live In Berlin 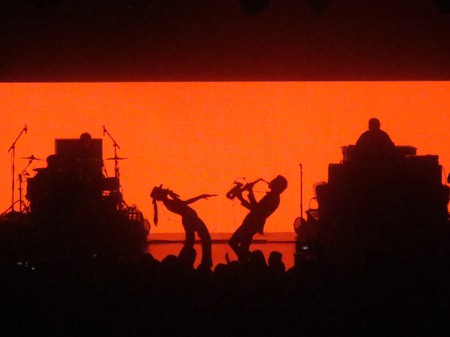 The master plays and the crowd moves. Not a single person was able to sit still at the rousing show electro-swing DJ Parov Stelar put on with his band Friday, 1 April 2016 at Max-Schmeling-Halle in Germany‘s capital. The king of electro returned for a bombastic night in Berlin. Read more about the show and the band’s creator, Marcus Füreder.

Austrian DJ, Marcus Füreder (known by his stage name as Parov Stelar), is the man who stands behind electro-sensation Parov Stelar, and can easily be seen as the father of electro-swing. He was one of the first to sample with the unmistakable sound of the 1920s, mixing it with electronic beats, house, jazz, and downbeat. Some thousand vinyls provide his inspiration, together with Youtube, CDs, and random everyday situations. In his discussion on the diversity of his inspirations, Parov Stelar says: “I’ve once watched a young cat. She danced and grooved through the streets and out of that I created the song Catgroove.”

In a wise move by Stelar, the gig included a live band, which added a concrete aspect because most shows that exclusively feature the DJ are lacking. Singer Cleo Panther’s sensual dance moves never failed to make the crowd beg for more. The wind section provided a jazzy feeling, and the stunning choreography was a masterful feat. The front side from the two platforms of Parov and his drummer were included in the video projections, giving them a 3D impression. Seeing the musicians as moving black statues in front of these screens made a lasting impression.

Parov Stelar chose his musicians wisely. Each of them is perfectly capable of blowing off an improvisation in fine jazz manners, never losing the blustering beat. Notably, the trumpet player stood out: catching the eye with his moves, the ear with his vibrant sound and as one of the few talking to the audience, their hearts. The band’s wardrobe featured swing attire: blazer, suit, braces, and hat.

Parov Stelar’s worldwide success with the fusion of live band and DJ speaks for itself. Since March 2016 Parov Stelar brings a festival feeling into your home with his last album Live @ Pukkelpop. This is the recording of a legendary performance at the Belgian rock-festival. Sixteen songs are on the album, most of which are from his preview release The Demon Diaries, spiced up with some of Parov’s most legendary hits, like ‘Booty Swing’ or ‘Catgroove’.

For the videos of The Demon Diaries the artist went back to the drawing board and examined some of his personal demons to use as inspiration. Marcus describes his thought process in this way: “Whenever I am successful with something I start doubting myself. Am I able to recreate that success? Do I even want that? Actually, I want to create something new, but will the audience like it? To get rid of that is a hard but important process. The demon stands for the constant restlessness which makes an artist successful in the long term and has to be part of his nature. The urge to constantly create something new and fetch the best possible.”

Aside from his live acts around the world, Parov Stelar’s musical drive led him to work together with Lana del Rey, Lady Gaga and Bryan Ferry. Marcus is in a constant love-hate relationship between his music and his family. As much as touring is like an addiction for him, he loves a cold beer with his wife, Lilja Bloom, and playing around with son Max at home in Mallorca. But fans must not worry. This is what he thinks about his future: “It looks as if the creative force claims its right and that is why I will keep on creating new tracks and present my music to an audience.”