Check Out The Thriving Stand-up Scene In Neukölln, Berlin

To put it mildly, Germans are not renowned for their comedic talents. This stereotype has of course long been rebutted by a number of German humorists, satirists, and entertainers. Still, when it comes to stand-up, German language comedians have not much to show, other than endless enumerations of the differences between men and women. Luckily, a group of Berlin-based international comedians has taken it upon themselves to create a thriving stand-up scene in the heart of the city. 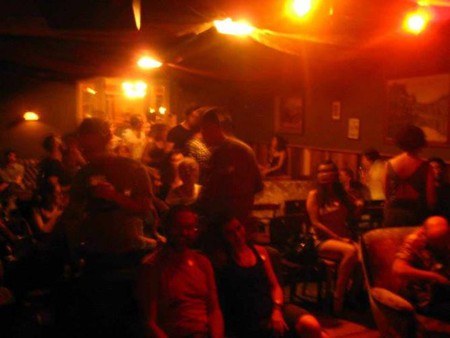 There are three weekly shows in Rixdorf, Neukölln’s historical center alone. The shows are deliberately casual, including motley seating arrangements in bars and improvised interactions with the audience. One of those shows is hosted and organized by Santiago Angel, who guides us through how Berlin’s comedy landscape is developing right now. His show is called Night Sweats and takes place every Thursday at Rotbart, the latest addition to the list of unmissable bars in Neukölln.

Angel explains that the open-mic ethos that prevails throughout Neukölln’s comedy is rooted in the working method of American comedians: ‘the way people generally do it in the States, which is not the way they do it everywhere else, is that you practice at open mics. You can see that if you watch Louie – you’d go on shows and you do a short set to practice material before you do the material at your show, where people are paying to see your rehearsed and tested material. The whole idea of an open mic is that it’s a place to practice’. Accordingly, it often happens that you see a rookie trembling with stage fright sharing the stage with a comedy heavyweight like Brooks Wheelan. 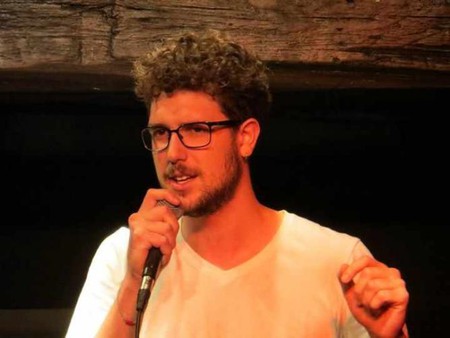 The former Saturday Night Live cast member performed a set in the jam-packed cellar of Neukölln’s Sameheads, at the weekly open-mic We are not Gemüsed. While the show attracts internationally renowned comedians from time to time, host Paul Salamone’s ruthlessly tart improvised crowd work and co-host Caroline Clifford’s charming keyboarding preserve an unpretentious DIY spirit. The Neukölln comedy scene is still getting started and lucky for us it still exudes unprofessionalism. You can see great comics but it is also open for new comedians and people who want to start their own show.

The unbusinesslike straightforwardness, which still characterizes how comedy is done in Neukölln was best captured when Angel told us how he got his own show: ‘I was doing comedy for less than six months and after a few months I started telling people that I want to do a show, I’m looking for a place. I found a place, I lost the place and then I found another place. And then we started a show and now I’m in charge of organizing that show.’ That’s how you get things done in Berlin. 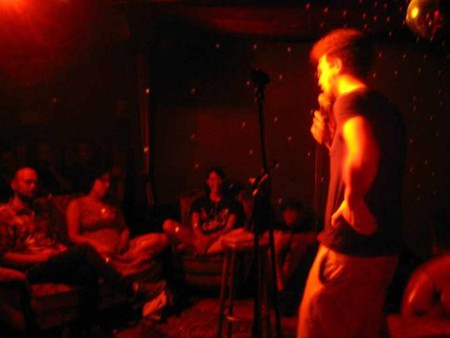 Speaking of Berlin, a common theme that runs through the performances are the experiences of internationals living in Berlin.’A lot of people talk about Berlin and Berlin has certain things that you’re probably not going to hear in Hamburg. I don’t know if in Cologne they are talking about unemployment and people with dreadlocks and drugs as much as we do here. Or living in Germany and not speaking German, that is a big theme.’

German bureaucracy in particular, and the myriad Kafkaesque absurdities it presents to those unfamiliar with it, turns out to be a comedic gold mine. British comedian Caroline Clifford perfectly sums up how obscure German institutions can appear to an outsider in one of her stand-ups. She recounts, utterly baffled, how she asked for a new cash card at her German bank, just to be asked why she lost her old one in return. What better way to neatly sum up that German bureaucracy performs wonders that cannot be fathomed? 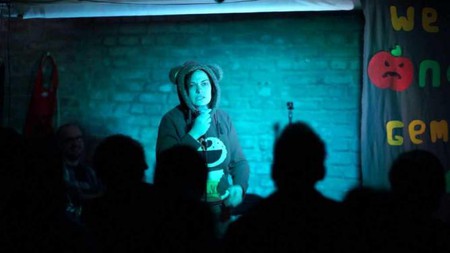 But how is it that there are English stand-up shows sprouting throughout Berlin’s bars while it remains difficult to find German comedy? Santiago Angel believes that there is increasing demand for English stand-up in Berlin not only because there are a lot of expats living here. It also has to do with the different comedic traditions. ‘People say that [German stand-up] hasn’t gone through all the stuff stand-up went through in the States and maybe the UK since the 1980s where you started to see a lot of experimentation, and alternative stand-up, where people started to make references to the fact that they are doing comedy’.

People come to see English shows to see a style of comedy that they could so far only experience by watching shows on Youtube or Netflix, something that neither German television nor German stand-up clubs could offer them. As Santiago put it: ‘if you accept what some people say that German language comedy scene is more traditional then it makes sense. Imagine, if you go to a city and it seems like every club is playing music from the 1980s and then a club is playing modern techno. Just because of the fact that it’s doing something different and also something that is contemporary people are going to watch it’. 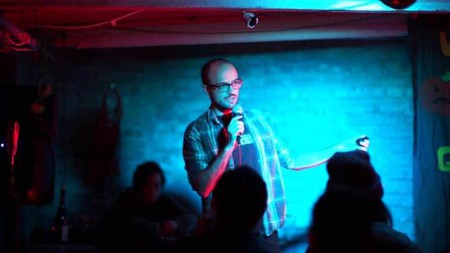 On Tuesdays, Berliners can pull their risible muscles at the aforementioned vegetable-themed open mic at Sameheads on Richardstrasse. On Wednesdays it takes a short trip to Kreuzberg’s T Berlin on Fidicinstrasse, to see The Petri Dish, captioned by the hosts as a ‘comedy open mic’robe’. (Maybe it should be pointed out at this point that the titular puns of these shows are not indicative of the level of comedy that is displayed). Thursdays we are back in Neukölln at Rotbart on Böhmischestrasse with Night Sweats, hosted by the incredibly funny Santiago Angel and co-hosted by Berlin’s most anarchic comedian Daniel Stern. To top it all off, Berlin’s comical week ends every Friday with Adorable Creatures, the coziest stand-up open mic in the city at KussKuss on Nogastrasse.

You can check out the other shows mentioned in this article at: