Melt!: The Heavy Metal Festival That Isn’t About Rock 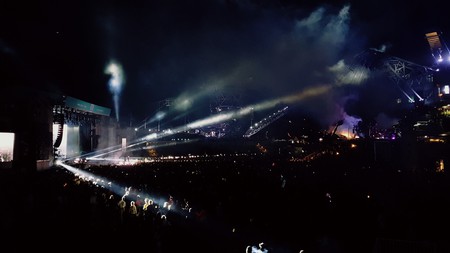 We take a closer look at Melt!, the music festival where imposing stages often outperform artists. 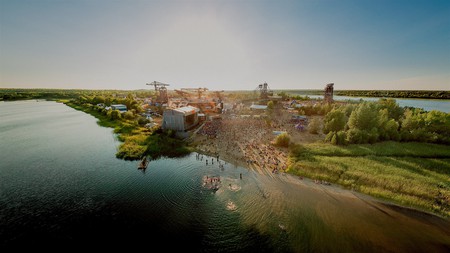 The view of Ferroplois during Melt! 2018 | © Stephan Flad

Known as “The City of Iron”, Ferropolis is a vast industrial complex in Germany where giant machinery has been left to rust. Since 2000, the space has also hosted the annual Melt! music festival and the iron structures are used as part of the stage for international acts to perform on.

The grounds of Ferropolis are surrounded by Lake Gremmin, essentially creating a moat around the festival. As you can imagine, particularly in summer, party-goers are keen to dive in and cool off in the water. Luckily this is encouraged, with guards on duty and even security boats circling the area. There is even a man-made beach to allow for the proper holiday experience, although you will always notice the old coal mining excavators that dominate the space. 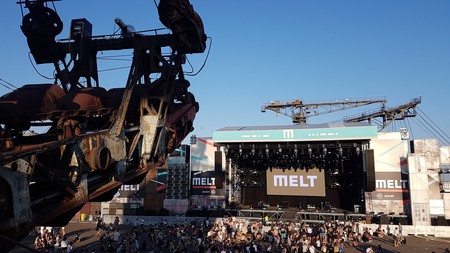 It’s this blend of ideas that separates Melt! from other festivals. Wondering around the site you will initially be taken aback by the huge industrial machines, but there is more to explore. The forest behind the main stage seemingly continues for miles and it’s impossible to resist the illuminated pathways in the evenings.

Ferropolis, for the majority of the year, is an open air museum. There are other festivals that take place here at other times, but Melt! is by far the best known. In fact, one of its regular highlights has achieved cult status. 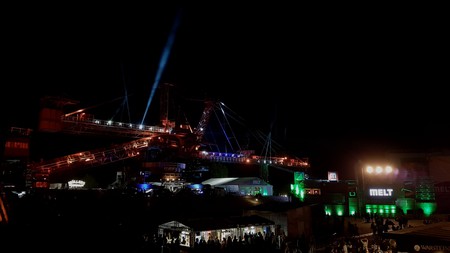 The Sleepless Floor, located just slightly away from the main entrance, is a 24/7 dance floor that runs non-stop for the duration of the festival. That’s over 90 hours of pounding electronic beats. This is as close to a long weekend in Berlin as you’re likely to get without actually going to the city itself!

Although Berlin is the place most people will fly into if attending Melt! from abroad, it’s worth highlighting that Gräfenhainichen (where Ferropolis is located) is at least a couple of hours away by road. Leipzig is slightly closer, and with a growing reputation of its own, is perhaps the best option for those looking to attend. If you had ideas about splitting your time between the machines and the art of Berlin, then forget about it. The commute between the two is exhausting. For more about getting to the festival, check out our handy guide. 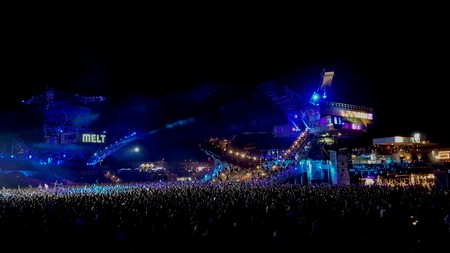 Every year the line-up is eclectic. The dance music favoured by young Germans is obviously present, but there is also a fair amount of more mainstream pop and rock. The headliners this year were Florence and the Machine and The XX. Both have played the festival circuit extensively in the last few years, so were hardly newcomers, but still delivered energetic performances which were enhanced by the lights illuminating the machinery around them.

In the evenings, during the main sets and just afterwards, there are pyrotechnics attached to the metal structures and a light performance to enjoy. 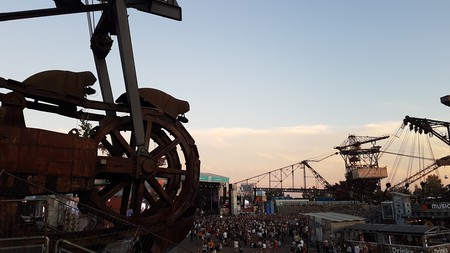 Other stages, although away from the main area, are well worth visiting too. For a more relaxed experience, the forest has several spaces to sit down and enjoy more chilled out tunes. This is also the best spot to catch the sunset from as it offers an unspoilt view of the lake.