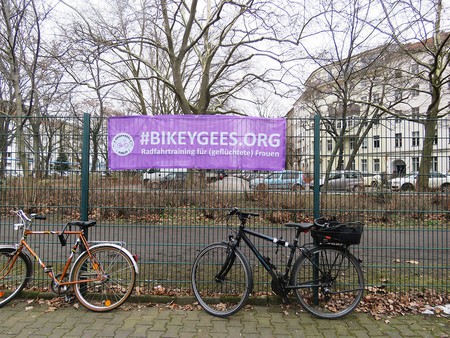 #BIKEYGEES e.V. is the NGO teaching refugee women to cycle, empowering them to move freely around the city. When the organisation first set out to grant mobility and independence to migrant women they were humbled by the demand. Now roughly 500 women have benefited from the scheme. Meet the women behind #BIKEYGEES, the NGO helping refugee women. 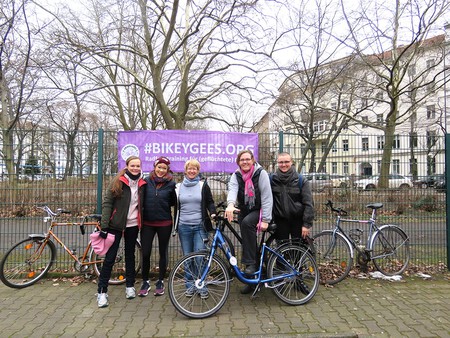 #Bikeygees began in 2015, following the huge influx of refugee arrivals in Germany. During this time Annette Krüger and her partner, both cyclists, started volunteering at refugee centres in Moabit.

‘It was in the summer in 2015 in Germany a lot of people arrived looking for protection and I started working in some of the shelters, and I’m a bike lover so I thought it would be great to teach some of the children and women to ride,’ Annette explains.

Starting out in a supermarket parking lot in Mobit, Annette coached the women and children on how to ride a bike.

‘We started by teaching the children how to ride a bike, then the women wanted to get involved because they saw that we make them feel safe,’ Annette said.

The classes were a success and quickly women were asking when they could get on the bikes again. Realising the demand, Annette established Bikeygees and moved the lessons to an unassuming traffic school in Kreuzberg. Two and half years on the organisation still meets once a month, bringing together women from all different backgrounds to connect, learn and of course, cycle. 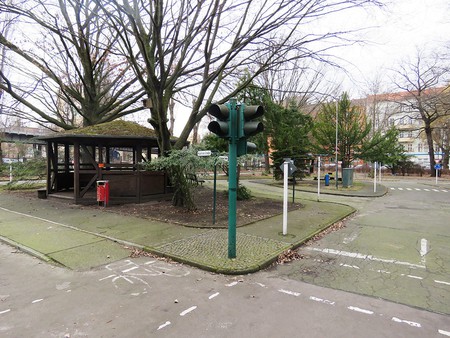 A sense of freedom

#Bikeygees aims to empower through action.

‘A lot of the women have lost many things, and we can’t replace that but what I can offer them is something new,’ Annette explains.

Giving women a sense of mobility and freedom is at the core of the NGO’s ethos, and aside from giving women the confidence to cycle, they also educate them about the road rules and how to repair their bike. Volunteer, Eva, who has been helping Bikeygees with training, organisation and administration, points out that ‘there are many people with different language backgrounds and it’s something that really has to be explained, so we have translators and the women have to pass a test to be sure they know the traffic rules.’

#Bikeygees work hard to ensure the women are comfortable, informed and ready to cycle. Ultimately though the organisation is also building a community, and Anette points out that ‘it’s not only that they are coming for help, they are also coming to find some new friends and networking.’ This helps break down barriers.

‘What we are talking about, is a change in mentality, letting the women realise that they can do things that you would never expect, wherever you’re from, or whatever you lose in your life you can go on,’ Annette says.

It’s clear to see the empowerment and community that Bikeygees has built when talking with 22-year-old Nourman from Syria. She has come to Bikeygees twice now with her friends Amna and Eiman from Libya and is already very confident on the bike. ‘It’s so fun!’ she tells me. Cycling is something she and her friends might not have had a chance to experience back home and they love the freedom it provides. Annette says it’s great to see how much joy Bikeygees brings the women.

‘It’s worth it, because you see even after the first round that the younger girls are able, even after half an hour, to cycle around and some hug me with tears in their eyes and say they would have never believed that they could do this before,’ Annette says. 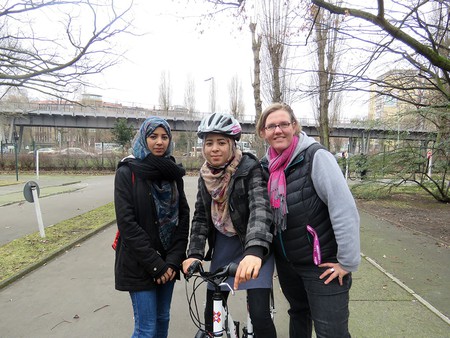 A strong network of volunteers

The NGO is run entirely by volunteers and donations.

‘We have so many wonderful volunteers from all over the world, we have friends from New Zealand to Stockholm and Toronto to Tokyo,’ Annette explains.

Volunteer Eva, tells me, ‘I like the spirit of this so much because you come here and you put someone on the bike and help them and in a way it’s so easy, you just have to come here and do it, and when you see that someone is really so happy to be able to learn how to ride a bike, which is something I’ve been able to do my whole life, it’s really rather emotional.’

It’s a truly rewarding experience for everyone involved and the women feel lucky to be able to effect such change, however, they say it can be tough running the NGO on their own. ‘What we always need is money, because we run on volunteers of course, but there is a lot that must be done in terms of organisation, administrative side and of course promotion so people know who we are and what we do,’ Eva explains. It’s clear to see the passion behind the project, as come rain or shine, in summer or the dead of winter, the community of cycling enthusiasts gather to meet, chat and cycle. 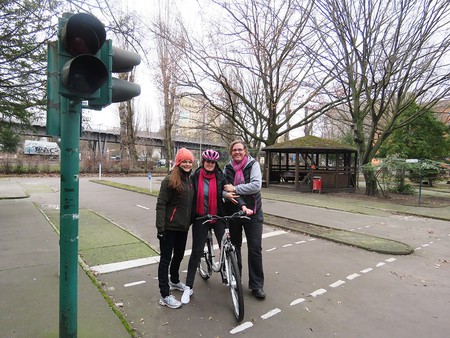 Bikeygees | © Alice Dundon
Give us feedback