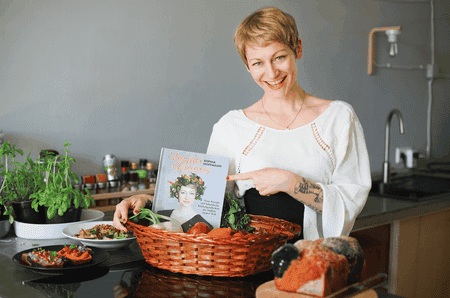 Sophia Hoffmann is a household name in Berlin’s foodie scene and one of the city’s most inspirational women: she is a vegan chef, writer, Youtube cooking host and food activist. As a pioneer in Berlin’s gastronomy scene, Sophia uses her platform to empower and create visibility for women in gastronomy while also advocating for animal rights and raising awareness about food waste.

Can you tell me a bit about when you first started working in gastronomy?

Through my 20s I worked mostly in nightlife as a DJ and party promoter, then journalism followed. But I had on-and-off side jobs in different gastronomy sectors most of the time. In 2011 I finally decided to be a full-time freelancer. First, it was writing and DJ-ing, but then food just took over.

Through starting my blog I discovered how strong my passion for food is and always has been and the readers started following, so one thing led to another. I don’t have classic education, but I worked in a lot of kitchens with a lot of chefs, did apprenticeships and workshops on the side. Since 2013 when I left DJ-ing, I [became] a full-time chef, food writer and consultant. 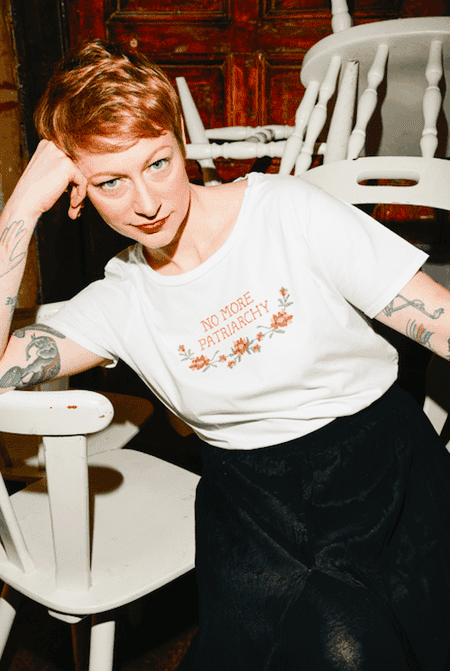 What was Berlin’s foodie/vegan scene like at that time?

Well, there were already probably more vegan options than in other cities, some established places have been there since the 90s [or] the early 2000s, but generally, the food scene exploded in the last six years. So did the vegan scene.

Back then, you had some fancy stuff going on and there was a wide range of international cuisine and a handful of fine dining places; now, people come to Berlin because it got famous for its vibrating food scene. 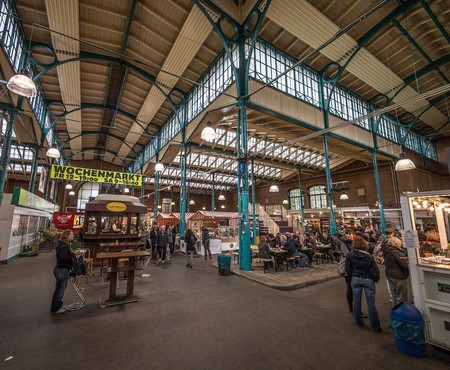 How do you think it’s grown since then? Particularly its vegan scene?

The scene just generally grew. I think one of the biggest reasons is that Berlin is so international. Lots of expats decide to come here and they bring their food cultures. In Berlin, young creative people come together and it is still quite easy to set up a business, at least compared to other cities. You can try out your stuff at a food market and if it works, open a shop or restaurant. With such an international young crowd, the awareness rises and many people are now either vegan or vegetarian or just choose to have healthier or more environment-friendly alternatives to the mainstream.

Berlin also has a huge community of foreign people who came here as refugees or workers in earlier decades. They also influenced the gastronomy of Berlin a lot. And they’re very clever when it comes to ‘vegan options’—if there is a market, they will provide. I just love the culinary clash and all those amazing products! 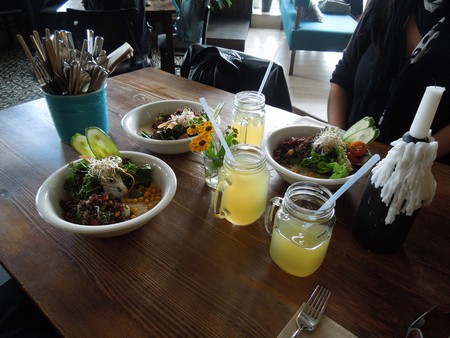 Lunch at vegan/vegetarian restaurant, The Bowl in Berlin | © ☮/Flickr

You wrote your first cookbook in 2014. Tell me a bit about that process.

I wrote my first book Sophia’s Vegane Welt in 2014 and it is much more than a cookbook. It’s all about playing with food, allowing yourself to be creative, colourful, sometimes silly but always delicious. It featured ‘fake dishes’ like savoury cupcakes that look like sweet ones and my favourite, ‘a puppy that stumbled into a passionfruit’, which is actually a cupcake covered with boozy icing. It’s a storybook.

In 2016 my second book Vegan Queens came out. It’s a cookbook that features ten female-led culinary businesses. I wanted to show these women and crown them because sometimes we women are a bit too humble about our work and our careers. In general, I don’t only write cookbooks; there’s always an extra story to it.

Tell me a bit about Women Chefs & Restaurateurs and how you get involved with them?

The organization was founded in 1993 in the US for women in gastronomy to support, connect and network and has done great work since then. For the last three years, they organized this very special dinner event at the James Beard House in New York City on International Women’s Day where an all-female chefs team creates an amazing evening. This year, it was an all-vegan dinner for the very first time and apart from that, the first vegan dinner at the James Beard House in general. Nina Curtis, who is upcoming president of WCR invited me. She did some international research on female vegan chefs with a focus on Berlin and luckily she stumbled over my work. It was probably the most exciting thing I did in my cooking career so far.

What was it like spending International Women’s Day surrounded by these inspirational women?

It was fantastic, I am still completely overwhelmed. Not only [because of ] the prestigious part of being invited to such a historical and important place but also cooking with these women. Creating this menu together, sharing our differences and similarities and just basically helping each other. It was sold out, and in the end, we received standing ovations. 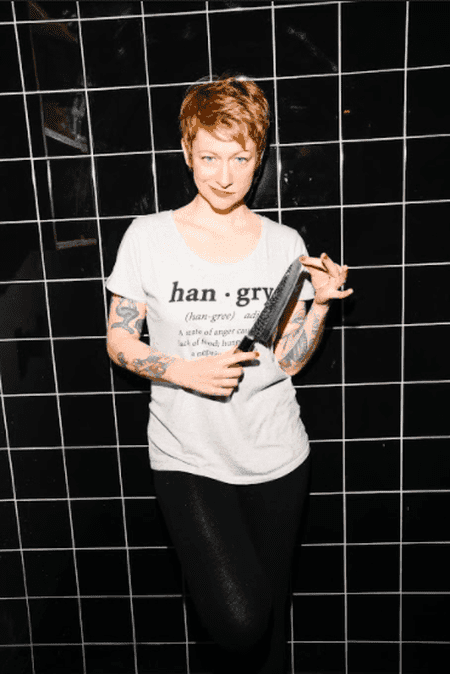 There is an impressively strong community of female foodies (bloggers, chefs, writers, etc.) in Berlin. In a male-dominated field is it nice to have so many strong, influential women by your side?

We just started to define our new modern idea of what gastronomy is. It is not only white men cooking fine dining, it is everything connected to food and feeding people. That can be catering services, food truck businesses, food production, food writing and blogging as well as food projects connected to sustainability, anti-food waste and circular economy. We should open all these doors and allow people of every gender and origin to be part of a new, more exciting, more contemporary future of food. A community helps to empower that, of course.

Can you tell me how the Feminist Food Club started?

It was founded by Mary Scherpe (of Stil in Berlin) and Ruth Bartlett in early 2017. By now we are around 700 members from all different fields of the industry which makes it such a strong and important network.

What makes this group so important?

It’s a safe space and a supportive community. From basic networking tasks to discussing business, we either connect online or at our monthly meetings. I can honestly say it changed so many things for me just in one year. We don’t only support each other but we also try to go into discussions and actively push change through things like the list of women in gastronomy in Berlin. We can hand out this list to journalists and conference organizers if they are looking for more female speakers or women to write about. They exist and we make them visible. 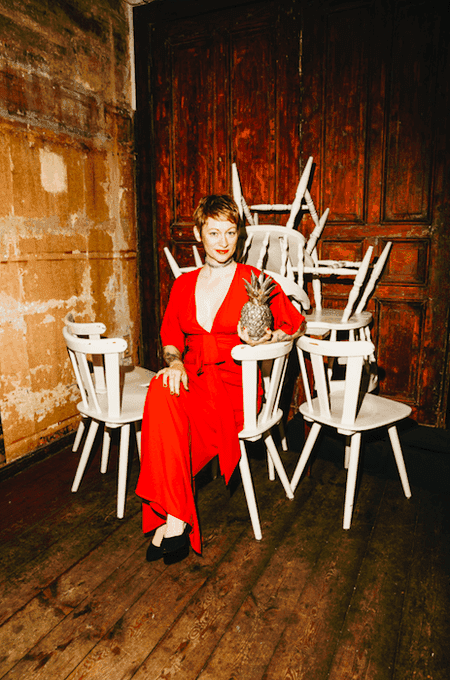 Berlin’s food scene is blowing up. Where do you see it going in the future?

I can see a strong and growing interest in the field of sustainability and circular economy and [many] businesses [opening] in Berlin which are specialized in that field. Isla Café just won the Gastro-Gründerpreis for their amazing concept. There is another vegan zero-waste café to open this year and places like Original Unverpackt make headlines all over the world. Companies like ReCup, a coffee cup deposit system, and Viva Con Agua, a fair trade water [company], show how alternatives can work in that context and compared to the US, I can honestly say we Germans are doing some pioneering work in that field. We have to understand that it will not only be about good food in the future but about fair trade, sustainability and producing less waste. If I am going to open my own business, this will definitely be a huge part of the concept!