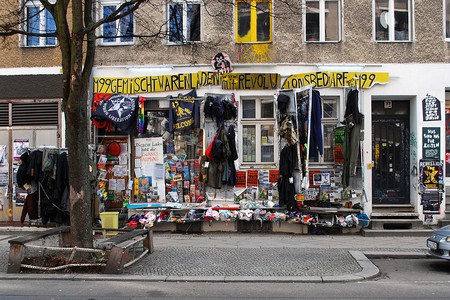 Berlin’s culture has been marked by the presence of squatters for several decades. This alternative faction of the city’s population is rather unique in terms of the sheer numbers of people that comprise it and the duration for which it has existed. Since the years following WWII, squatters have found refuge in the city’s many abandoned buildings. The anarchist shop M99 is one of such strongholds.

M99, which is referred to as the ‘corner shop for revolutionary needs’, first opened in 1985. Its eccentric owner, Hans-Georg Lindenau has been defending it from the encroachment of conventional society for the entire duration of its existence, and with it everything the shop itself stands for. For this reason, he has deemed himself ‘State Enemy No. 1’. The store, which also functions as Lindenau’s home, is located in Kreuzberg, the district with the longest history of squatting in the city, just at the edge of Görlitzer Park. Its existence, however, is tenuous and limited as gentrification strengthens its grip around Berlin. 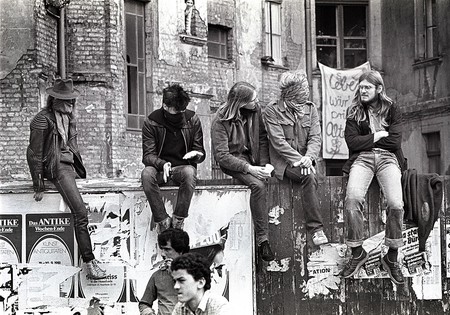 Yet, for a dwindling amount of time, it is still possible to walk around the shop’s chaotic, meandering corridors, teetering with a slew of different products, pamphlets, and clothing geared towards the radical left. No doubt, Lindenau will be there until the very end of the shop’s days of operation. Now in his late 50s and confined to a wheelchair, Lindenau is as dedicated as ever to keeping the shop up and running. Demonstrations and protests with hundreds in attendance have even been organized in hopes of combatting the eviction. Lindenau leads the pack from his wheelchair, wearing a spiked Prussian war helmet and holding a sign that, in German, reads, ‘You don’t replant old trees’.

This shop and its scheduled fate of eviction is a symbolic representation of Berlin’s shifting culture and values. Long touted as the city that’s both poor and sexy, the squatters and their countercultural beliefs contributed to the alternative vibe of the metropolis in many ways, keeping things inclusive for social outsiders and undeniably alternative. The effects of their presence can be felt in Berlin’s underground club scene, its experimental contemporary art, and even in the relatively low living costs that residents still enjoy today.

Still, it would seem that the natural course of events in modern society is often towards order, and the city government’s tolerance for their presence is dwindling, as evidenced by the increasing number of police raids M99 has been subject to over the years leading up to Lindenau’s ultimate eviction. The influx of real estate developers looking to take advantage of Berlin’s favorable living conditions has been the final push for giving squatters the boot, and this has been something that even M99 hasn’t been able to evade.

With the help of many supporters in protest of the eviction – which has been made on allegations that Lindenau sublet the apartment above the shop without authorization – it won’t be enforced at least until after the recent state elections, which were held on September 18th.