Is 13 x Cate Blanchett in "Manifesto" Too Much of a Good Thing? 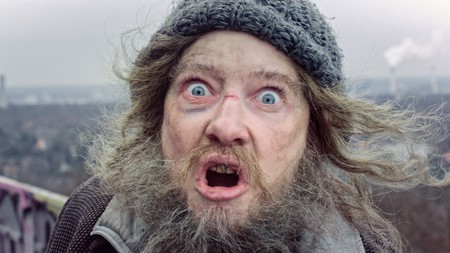 Handsomely shot in Berlin in 11 days, Manifesto is certainly a stunning technical achievement. It consists of 13 vignettes in which Blanchett plays (see below from left to right, starting with the top row) a homeless man, a Russian choreographer, a posh CEO throwing a party at home, the northern English operator of a garbage removal crane in a factory; (second row) a conservative mom, a puppeteer, an investment broker, a scientist; (third row) a grade-school teacher, a punk, a newsreader, and a funeral orator. (The 13th character, unseen here, is a TV journalist who reports live to the newsreader). The star pulls off a feat of impersonation previously achieved by Alec Guinness, Peter Sellers, and Tracey Ullman on her TV show. 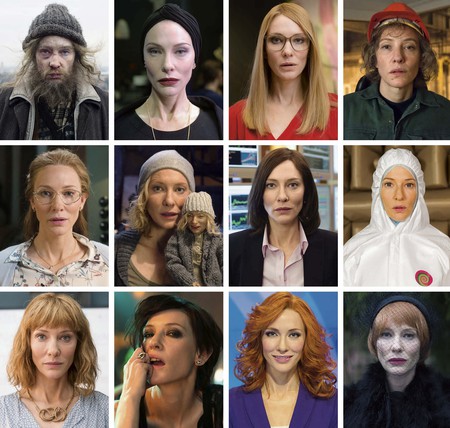 The characters either rant, proselytize, or speak interior monologues. The vignettes have been mosaicked together to give the sense of a socially divided dystopia. Mercifully, Blanchett only plays Caucasians. It would have been tactless for her to have played people of other ethnicities, but the lack of racial diversity is troubling. Where have all the non-whites gone?

Nothing any of the characters says or thinks seemingly bears any relation to their identities. Rosefeldt has made them mouthpieces for a wide cross-section of 20th-century artistic manifestos, most of them politically tinged.

The disjunction between what’s being said and who’s saying it is intermittently amusing, but as the weighty speeches blend into an incoherent babble, the film becomes increasingly tedious. The viewer has to concentrate so hard to understand whatever Futurist, surrealist-spatialist, suprematist-constructivist, fluxus, or vorticist and abstract expressionist theory is being proposed that it’s possible to miss witty nuances in Blanchett’s performances. That, at least, was my experience. An art history professor may find the polyphony reductive. 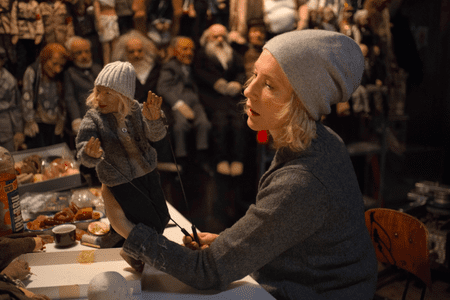 The puppeteer and her mini-me | © FilmRise

Some of the vignettes work better than others. The homeless man—reminiscent of Michael Palin’s bedraggled apocalypse survivor in the opening credits sequence of Monty Python’s Flying Circus—makes a great Situationist as he and his dog wander round a post-industrial wasteland.

Haranguing her fellow mourners, the funeral orator proves a perfectly bitchy exponent of Dadaism’s anti-capitalist rhetoric. The newsreader is too hectoring, though she’d do well on Fox News. Since she waxes on and on about how conceptual art pieces may be freely interpreted by anyone (the artist included), I must be allowed my belief that the funeral orator is Blanchett’s Shirley MacLaine impersonation.

The kids in the teacher’s art class listen dutifully to her recommendations from such filmmakers as Stan Brakhage, Jim Jarmusch, Werner Herzog, and the Danish Dogme 95 movement. But since the pupils are first seen uninhibitedly drawing and crayoning, her advice seems unnecessary. It feels like Rosefeldt shoehorned these directors into the film’s philosophical tapestry to give it art-house credibility and a degree of hipness. 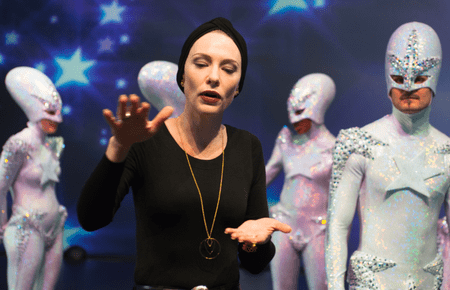 Blanchett is miraculously Slavic as the haughty choreographer, who talks about fluxus and anti-art, while exasperatedly putting sylphs in a corps de ballet dressed as 1950s Martian-types through their paces. There are traces of Annie Lennox and Amy Winehouse in the working-class London punk who bitterly espouses stridentism and creationism at the dog end of an after-gig party. The bespectacled mom, who leads her bored husband and sons in a Pop Art prayer at the lunch table, is now a Christian Right Trump voter, no doubt.

Manifesto is a curio—an odd mix of pretentious and beguiling, a film dense with meanings subordinated to the virtuosity of its star. Art is dead, someone says—long live Cate Blanchett!