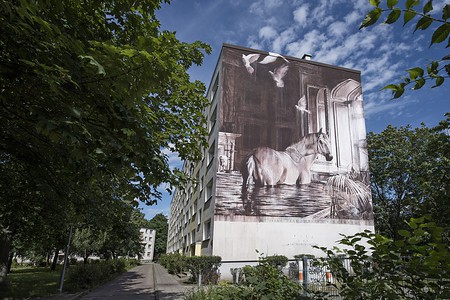 Europe’s creative capital has recently been adorned with a powerful new mural by artist Ricky Lee Gordon, thanks to Urban Nation Berlin. Locals looked on as the impressive artwork took shape over a rigorous week of non-stop painting. On a wet and rainy summer’s day in Berlin, Culture Trip met up with the artist outside the freshly painted wall and picked his creative mind about the spiritual philosophies that inform his work, the importance of making art in public space and experiencing Berlin from a street corner.

Ricky Lee Gordon was invited to Berlin to paint a massive mural as part of the One Wall Project curated by Urban Nation, a museum for urban contemporary art in the city. The South African-born artist, currently based in Los Angeles, paints murals that focus on bringing relevant social issues to light and exploring the nature of man in present society, in history and in nature. 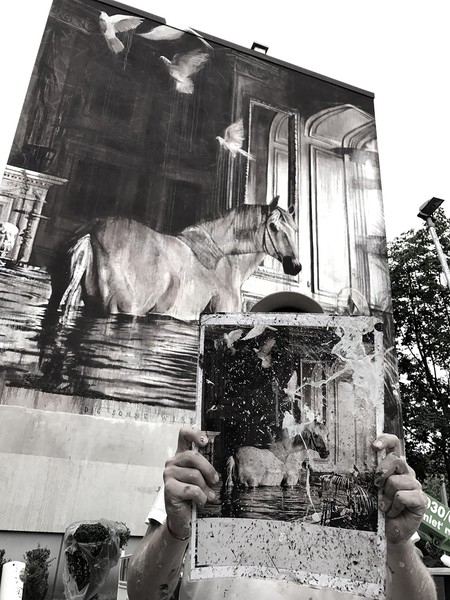 The mural is inscribed with the poem and title in German:

Die Sonne wird im Ozean versinken (The sun will sink into the ocean)
Der Mond und das Wasser werden steigen (The moon and tides will rise)
Diese Könige in ihren Schlössern werden weggewaschen. (These kings and their castles will wash away).

What is the concept of this new wall in Berlin?

Usually when I paint murals in new countries, I don’t have a plan. I arrive and immerse myself in the community and environment and try and make something specific to the people and place. But with this mural, I actually came to Berlin with a specific idea and a universal message that I feel is quite timely for the condition of our planet right now. 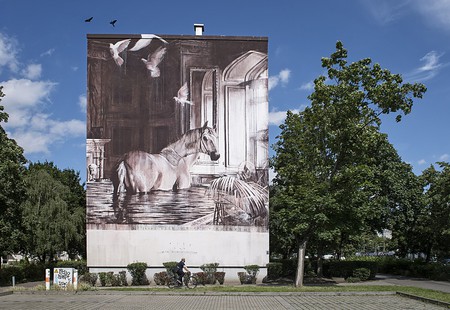 I think humans have always been in constant pursuit of progress, but this progress is at the detriment of the planet, and therefore to the detriment of us because we are connected to the planet. We are conditioned to think we are separate, but in reality, what we do to the planet we do to ourselves. People are starting to wake up to the reality of how we affect the planet and getting more informed on how the few in power make decisions that affect us all. I think that’s creating an uprising of creativity, sensitivity and consciousness, but it’s also creating a lot of despair because people don’t know what to do. My message in this mural is that it’s okay. It’s okay that we don’t know what to do, and it’s okay that this stuff is happening because it’s nature, and nature will do what it does. A river will flow the way it needs to flow.

How is this message shown in the final mural?

There is a white horse in an abandoned palace. The sun is both falling and setting. It casts a golden light into the room and onto the remains and relics of a broken palace. The horse still remains; it has survived through the devastation. So the valiant horse carries the message that nature will always survive, that there will always be new life after destruction. I didn’t want to paint something dark and gloomy; I don’t want to send an apocalyptic message.

How do these motifs relate to Berlin?

The stately and grand architecture I used in the mural is reminiscent of the pre-war architecture of Berlin. It’s what I’d imagine seeing here in the 1920s and 1930s. The mural also references kings, or people that hold onto the reins of power, enforcing their vision and ideology onto society. The point of the mural is really to say that even these kings and their castles will decay, that the ultimate king is nature, who will eventually wash them away. I get the impression in Berlin today – that although it has this difficult, negative past and was once a kind of torched earth, it is now inhabited by artists and idealists who are creating something new on top of the destruction. And that’s the cycle of nature: from destruction and decay, new life is birthed. That’s what I took away from Berlin, these young spirits from around the world in an old land creating a new history. You can feel this mixture of old and new so sharply in the city. 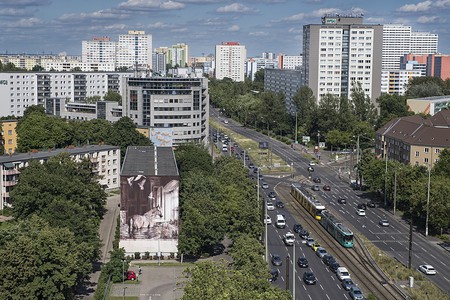 From musicians to artists, Berlin is renowned for people using the streets as a stage for expression and performance. Why do you think it is important to make art in public spaces?

I make art in public because I’m interested in interconnectedness. I’m inspired by the world around me but also trying to understand that world, and so my art is really just an expression of my findings. Putting work in public space, open to public commentary and for people to like or dislike also keeps the ego at bay. It breaks down a barrier that makes it ‘mine’ because, in the street, it belongs to everybody and becomes the interpretation of others. That experience creates a feedback system that helps me understand and evolve as both a painter and a human being.

Also, there is so much visual pollution in the city, and I think art is always a good remedy for that. It is important to have creative voices in public space, to contradict the media’s agenda of consumption and acceptable social norms. Even if you don’t like it, better to have art to make you think rather than an advertisement that tells you what to think. 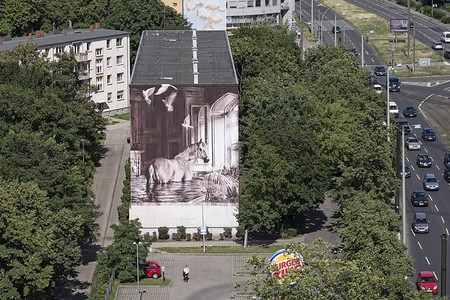 How did you get in touch with Buddhist psychology and the themes of non-duality and interconnectedness present in your work?

There were two things. Firstly, growing up in South Africa, I’ve been very lucky to be surrounded by extreme natural beauty. Then, being very ambitious at an early age, I grew unhappy and learned that success is empty. Ever since then, I’ve been trying to find another way, and I guess that is more of a spiritual approach for me, where I try look after my state of mind and I try be happy and give happiness to others, knowing that my actions affect other people.

What’s the technical process when creating an artwork like this?

I put together a collage of images using Photoshop and transfer this to my phone as a reference. When I paint, there’s more of an intuitive process at play, so I don’t really know what the final artwork will look like – I don’t wan’t it to look exactly like the sketch. I first paint a grid system on the wall and paint square metre by square metre. Its like using a map. Then I add highlights and strokes and drips intuitively to create dimension. Each day I try to make gestures where the painting forms its own life, and I try allow myself to trust that process. 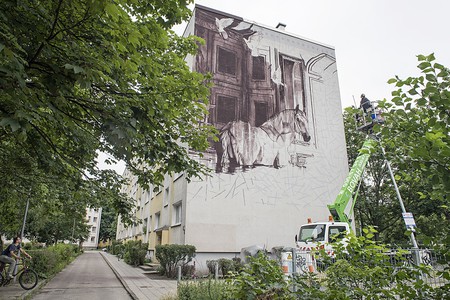 I’m painting very up close on the crane, so I can’t come off the wall very often. I use the word ‘abstract,’ but essentially, if you zoom in on any image, it will be abstract. It’s only form, structure, light and tone that create a final picture in our mind to cognate into something we understand. When I paint, I like to lose the idea of what it is and just see shapes. If you crop into the mural, areas become little abstract paintings in themselves. 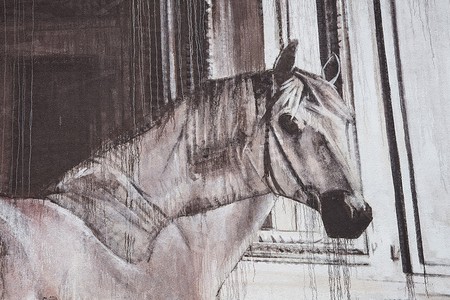 The horse in detail | © Nika Kramer

You use brushes and paint for your murals. What made you move away from using classical spray paint?

I moved away for the sole purpose that it’s toxic and unhealthy. I didn’t feel good painting. I also started to discover that there was more I could do with a brush; there was this freedom and tactile relationship I now had with the wall. When I’m applying paint with a brush, I can actually feel the wall, which I can’t when spraying. I don’t have to wear a gas mask, and I create a little open air studio in my lift; I make some shelves and a palette and can also mix my paint up there. I enjoy being up there, looking over the city, watching life pass by. I’ve seen the same corner for a week now – it’s a strange way to experience Berlin or any place, but it’s also quite special.

Berlin has been raining on an off for a few days now. How do you deal with these external and uncontrollable influences while you work?

Painting a mural is always going to be a challenge because it’s a new environment with new restrictions and, in general, the space is volatile – you never know what to expect. But I enjoy that. Each time you challenge yourself to navigate through obstacles and you’re forced to problem solve. You always do, and that is rewarding. 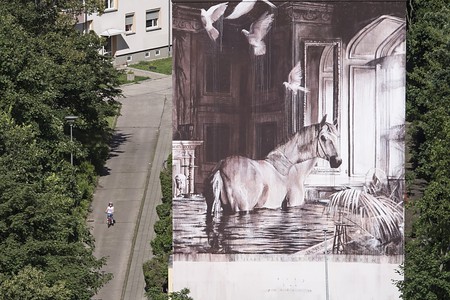 If you’re in Berlin, stop by Landsberger Allee 121 to see the mind-blowing mural in real life. Follow Ricky Lee Gordon and Urban Nation Berlin on Instagram to see more beautiful artworks and related events around the city.