The Berlin Wall, in its existence as much as in its demise, was a symbol. Dividing East and West Germany for close to 30 years, the opening of the borders and subsequent reunification marked a change so big in people’s lives that many didn’t think they would see it happen in their life time. This looks back on the night that initiated ‘Die Wende‘ (The Change) — November 9, 1989, the night the Berlin Wall fell. 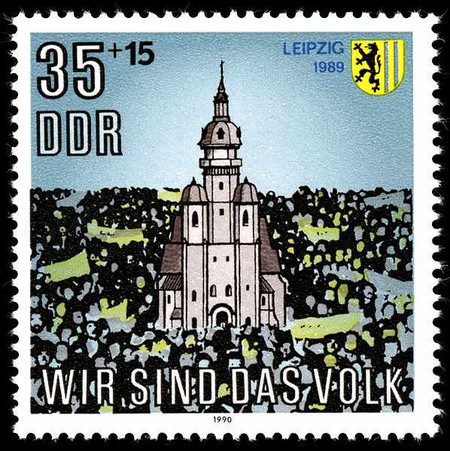 The Berlin Wall: A Symbol Remembered

While it stood, the Berlin Wall was one of the most powerful manifestations of the political landscape in 20th-century Europe; it was a physical reminder of the Cold War that kept the world divided for decades. Its builders claimed it to be an ‘anti-fascist protective rampart,’ protecting the Socialist East from harmful influences of the Capitalist West. It was a symbol of power as much as of desperation.

Everyone knew it wasn’t there to stop anyone from coming in so much as to keep everyone from getting out.

By 1961, more than 50,000 Berliners commuted daily between the four former allied occupation zones. Many were working jobs in West Berlin and keeping flats in East Berlin. At the same time, more than three million East Germans had already left the GDR for good. Most did so via Berlin where you only had to cross the street to walk between nations. Deemed an untenable situation, the government of the GDR decided that a wall was the best way to put an end to the exodus.

The decision not only had an impact on a political level but also intensely personal consequences for Germans and Berliners in particular. As the Wall divided the city in half, it also cut through friendships, families, even lives. Border crossings became places of heartbreak and sorrow, such as the Berlin Friedrichstraße — a train station connecting East and West Berlin — which was soon colloquially known as the ‘Tränenpalast‘ (Palace of Tears). 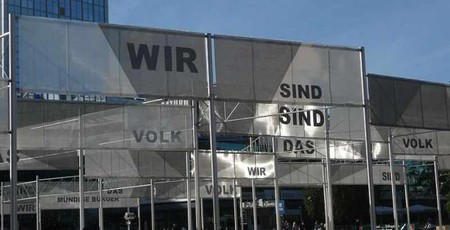 Twenty-six years ago on Thursday November 9, 1989, East German party official Günter Schabowski held a routine press conference, part of which was an announcement regarding the easing of travel restrictions for East German citizens. This new regulation wasn’t supposed to come into effect for at least 24 hours, but the note from which Schabowski read the announcement made no mention of this. So when pressed by the media and without further instructions from above, Schabowski announced, and later repeated, that the new travel regulation was effective immediately.

That same evening, West German public national TV channels ZDF and ARD broadcast parts of the press conference during their main evening news report. Although officially sanctioned in the East, West TV at the time was widely watched by East Germans, and so the news was effectively broadcast across the entire Socialist Republic.

The borders are open. Among East Germans, the revelation detonated with the force of a nuclear bomb. 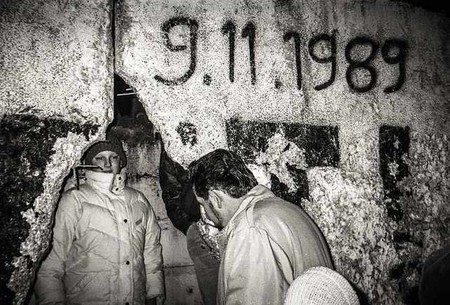 Marching For Freedom: We Are The People

In 1989, the German Democratic Republic was a failing state, and half a century after its establishment, this was becoming harder and harder to conceal. The unravelling accelerated in earnest in May 1989 when Hungary opened its border to Austria, thereby leaving a huge hole in the formerly impenetrable Iron Curtain. Immediately, the GDR once again began hemorrhaging citizens, just like it had before the building of the Berlin Wall in 1961. Thousands were heading east to Hungary to cross over West Germany via Austria.

After the ousting of long-time leader Erich Honecker in October 1989 by party comrades, the plan for free travel of East German citizens was one of many concessions by the reformed East German government designed to stem the tide of political unrest that had been building in recent months.

Since early September, peaceful political protests in Leipzig had been drawing in progressively more people every week. The ‘Monday Demonstration’ on October 9th proved to be a turning point for the movement. As thousands of riot police amassed around them, over 70,000 people marched in protest of the lack of democratic freedoms, such as the freedom to elect one’s government or freedom to travel, in the GDR. It was a tense moment. Just four months earlier, the communist regime in China had waged a brutal crackdown on student protests, which came to be known as the Tiananmen Square Massacre. And only two days prior on October 7th, on the 40th anniversary of the foundation of the GDR, police forces in Berlin had brutally beaten protesters in plain sight of Western camera teams, which had broadcast the carnage. In the absence of any Western observers in Leipzig, there was no telling whether the following Monday demonstration would end in bloodshed or not.

To everyone’s relief, October 9th remained peaceful. While some arrests took place and armed forces stood ready, no large-scale police intervention occurred. This was in part due to the lack of clear orders from the Politbüro in Berlin, in part because the sheer number of participants took security forces by surprise and in part because demonstrators behaved exemplary throughout the whole evening.

A week later, on October 16th, the number of participants swelled to 120,000. And the week after next on Monday October 23rd, numbers more than doubled again as 320,000 people marched the streets of Leipzig. Their most famous chant ‘Wir sind das Volk’ (We are the people) became synonymous for the widespread desire of the people to exercise their democratic rights.

By that point, it was an unstoppable force. Seventeen days later the Berlin Wall fell. 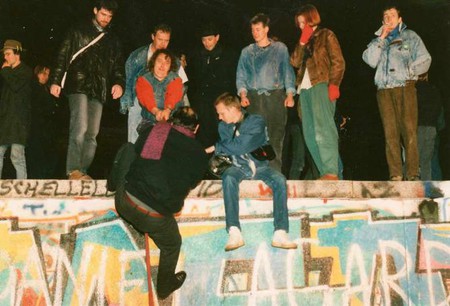 We Will Come Back. We Have To Go To Work, After All.

Almost immediately after the broadcast of Schabowski’s announcement by West German TV stations on November 9th, people set out to gather at the six checkpoints between East and West Berlin. Hundreds more were heading towards the border — in Trabants, in taxis, on foot.

At the checkpoints, however, guards had received no orders to open the border. As more and more people gathered, the gates remained firmly shut. At checkpoint Bornholmer Straße, soon the atmosphere grew tense. Hundreds of East Berliners had assembled, frustrated with the delay, pushing for the gates to be opened as had been promised on TV earlier that evening. 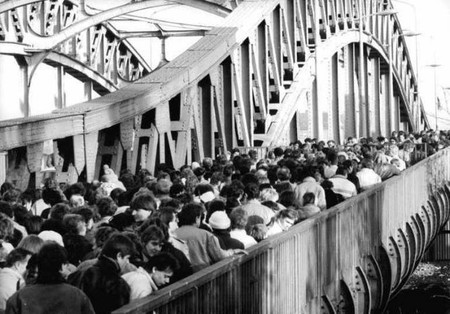 Some of the waiting men pleaded with the guards: ‘We just want to pop over to have a look. We’re going to come back.’ And anyway, they said, most of them had work the next day — it was a Thursday, after all — so why would they want to stay in West Berlin? Few, if any, East Berliners held ambitions that night to leave the GDR for good. They had come to the checkpoint with nothing but the clothes they were wearing. They wanted to have a look, they argued, cruise around for a bit, and then come back. With the crowd thickening, dozens began chanting: ‘We will return. We will return.’

With tension building at Bornholmer Straße, border forces eventually decided to ease the pressure by opening a tiny valve and let the most insistent among the waiting cross over to West Berlin. Only later did it transpire that their passports had been stamped in a way so as to enable border police to identify those crossing the border that night and to refuse them re-entry into the GDR thereafter. In a country that spent the better part of 30 years denying its citizens the right to free travel or only under highly policed conditions, punishing those desiring to return was as much an absurd measure as it was a desperate one.

Ignorant of this last-ditch attempt to enforce travel restrictions on East German citizens, hundreds of people began rushing toward the gates, soon reducing the checking procedures to a mere farce. Repeated attempts by border police to obtain clear orders from their superiors failed. Eventually, the guards decided — independently — to open the gates, making Bornholmer Straße the first checkpoint that night to permit free movement for East German citizens into the West. 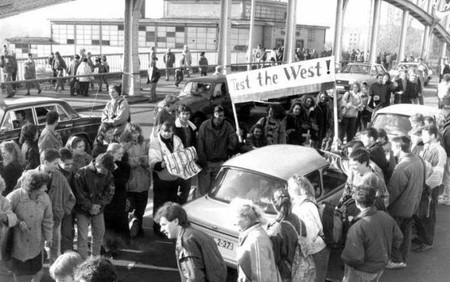 The End Of History: A New Beginning

Günther Schabowski, of course, didn’t cause the downfall of the GDR but his announcement on November 9th undoubtedly hastened its demise. It set in motion a chain of events that began with the fall of the Berlin Wall and ended 47 weeks later on October 3, 1990 when 51 years after its foundation, the German Democratic Republic formally ceased to exist.

Since then, a whole new generation has come of age who, born into a reunified Germany, know the tales perhaps only from their parents. But a quarter of a century after the Berlin Wall fell, the city and its inhabitants continue to commemorate it. In 2014, for the 25th Anniversary, the city was set alight with lamps following the old running of the border.

Germans often refer to the fall of the Berlin Wall as ‘Die Wende‘ (The Change or The Turning Point), and this is true in the grand political as much as in intimate personal sense. The fall of the Berlin Wall was a change on an extraordinary scale, marking the end of one state and a political system and paving the road for the reunification of Berlin as a city and Germany as a nation.