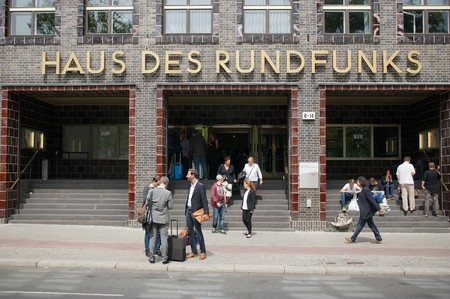 The oldest independent radio house in the world, Haus des Rundfunks, is a broadcasting and architectural gem in Berlin. It was designed by German architect Hans Poelzig in 1929 after he won an architectural competition and was largely completed the following year. Poelzig’s design was hailed for its placement of three large transmission halls in the buildings centre, shielding them from street noise by surrounding offices. The building survived through World War Two and The Cold War, and is now used by local ARD broadcaster Rundfunk Berlin-Brandenburg (RBB). This is the story being Berlin’s oldest radio station. 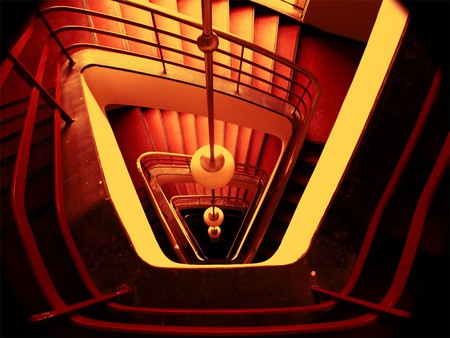 The Haus des Rundfunks was one of the first buildings in Europe solely dedicated to broadcasting. Designed with a plan shape of a rounded triangle and 150-metre-long façade of ceramic tiles, the building is particularly noteworthy as it still offers ideal conditions for broadcasting productions today. At the time, Hans Poelzig had very few designs to emulate, yet he was still able to develop ideas that are still used, namely placing the office and editorial rooms on the outer areas of the building and the three large studios at the inner. Poelzig put a huge amount of thought into the acoustics of the rooms, even the chairs were specially designed so that they had the same sound-absorbing qualities, and the smaller recording room had a hundred wall panels which could be flipped to create different reverberation effects. As such, the Haus des Rundfunks also had an important influence on the development of stereophonic sound and its adoption to broadcasting. The building was an architectural gem of German broadcasting, however as tension loomed and the country was on the brink of World War Two, Poelzig, who had no desire to work with the Nazis, had made plans to relocated to Istanbul, but sadly died in Berlin in 1936. 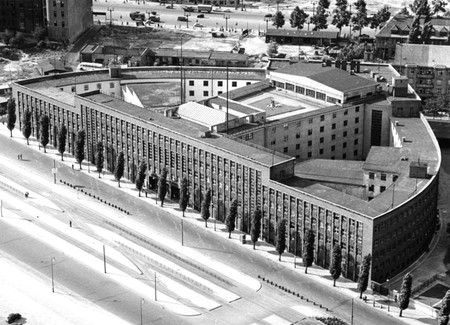 As World War II broke out, some radio programming at the Haus des Rundfunks continued. Notably the Wunschkonzert für die Wehrmacht, or Request Concert for the Armed Forces, which was a 1940s German drama propaganda film. It was broadcast from the house every Sunday afternoon from 1939 to 1941. After the war, as the city was divided up by Allied forces, the broadcasting house became part of a Cold War issue. Although it lay in the British Sector of West Berlin, it was used and controlled by the Berliner Rundfunk radio station, which was established by Soviet forces. In 1952 the building was handed over to East Berlin territory, only to then be given back to the West four years later. After considerable renovation work, the broadcasting house was once again in use and became home of the Sender Freies Berlin broadcasting programmes, which decades after the fall of the Berlin Wall, in 2003 merged into the Rundfunk Berlin-Brandenburg, who continue to use the building today. 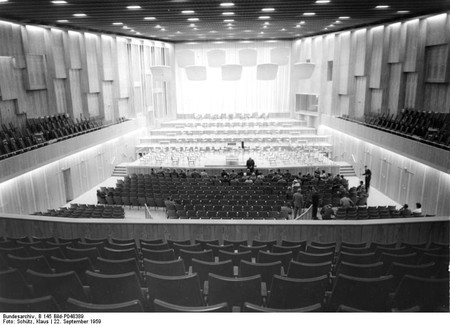 Rundfunk Berlin-Brandenburg remains an important part of Berlin’s broadcasting landscape, producing radio programmes radioBerlin, Kulturradio and Inforadio. The studios are also used for concerts and radio recordings and the Deutsche Symphonie-Orchester and Rundfunk-Sinfonie-Orchester regularly performs in the large studio. Throughout the years the building has survived Berlin’s turbulent history, retaining its integral structure and holding with it a long history of radio in the German capital.