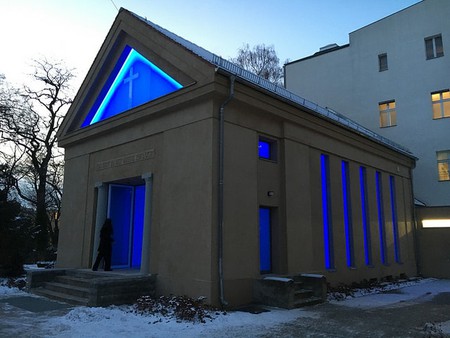 Berlin has an uncanny ability to recycle old buildings into creative venues. Whether it’s techno club Berghain (housed in an old power station) or a gallery in a Nazi bunker, the city’s doorways hold the promise of the unexpected. With creativity around every corner, it comes as no surprise that churches and crematoriums are becoming art spaces.

One of the most famous of these is the Dorotheenstädtischer Cemetery in Berlin, which headlined international arts publications in 2015, when superstar light artist James Turrell created a permanent installation in one of its chapels.

Built in 1928, the burial chapel reopened in 2015 after two years of renovation work and is, to date, the only work by Turrell accessible to the public in Berlin. Known for his large-scale light installations which question human perception, the American artist transformed the chapel into a surreal space, through a colourful play of light. The installation is only accessible via daily visits organized at sunset, so make sure you check the timetable on the cemetery’s website to plan your visit.

Another famous example is former Catholic church and community centre, St Agnes. The brutalist structure’s main building, which was built in the 1960s by Werner Düttmann (an architect and Berlin’s director of urban development at the time), reopened in 2015 as the contemporary art gallery KÖNIG GALERIE. 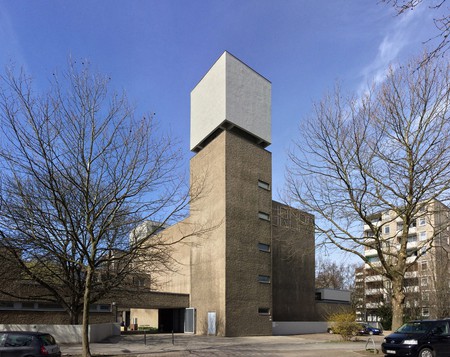 With an ambitious mixed-media exhibition program, the gallery represents 38 emerging and established international artists and is often cited as one of the German capital’s best art galleries. Since its inauguration, notable exhibitions have included artists such as Katharina Grosse, Alicja Kwade, Norbert Bisky and Camille Henrot. The structure also hosts diverse commercial and art tenants such as the art space 032c Workshop.

The Berlin art community has not stopped at reclaiming disused churches. The city’s first crematorium has also been re-purposed into a cultural centre. Silent Green Kulturquartier, in Wedding, opened in its new form in 2015. Originally built in 1911, the structure was closed by the city in 2002 and renovation work started in 2013 to turn it into a cultural space. The venue conserved the original building’s domed structure and concrete halls to host diverse art events, workshops and concerts (and even a ‘daytime disco’). The cultural complex also boasts the contemporary art gallery Galerie Ebensperger and muli-faceted art space SAVVY, among other creative tenants.

The Krematorium Treptow stands apart from Berlin’s other resurrected art venues due to the modernity of the building – it was built in the 1990s, and still functions as a crematorium.

Designed and constructed by Axel Schultes’s architecture firm (which also led the construction of federal government buildings, Band des Bundes), the Krematorium Treptow will delight all architecture lovers with its mesmerizing light-filled space, high ceilings and concrete central columns. The building is open to visitors on weekdays.