Everything You Need to Know About Grassroots Fight Against Gentrification 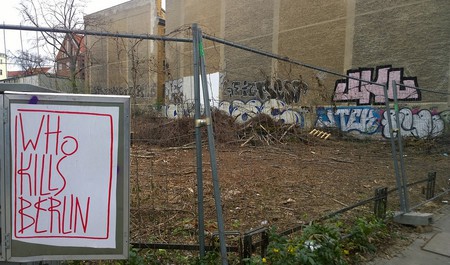 “The people run this city” and “poor but sexy” are just two of the phrases that have come to describe the attitude of Berlin. The battle to keep Berlin cheap and authentic is ongoing, threatened under the tension of gentrification and a landscape that is continuously being reshaped, remoulded and redefined.

Gentrification is nothing new to Berlin. In 2008, street artists Blu and JR painted over a mural they created on Curvystraße in Kreuzberg, which became seen as an iconic symbol for the attitude of the city. The blackening of their own work was a kind of protest against the increasing number of cranes that started to rampantly pop up across the landscape, as property developers began to take advantage of the artistic appeal of the city for their marketing campaigns. 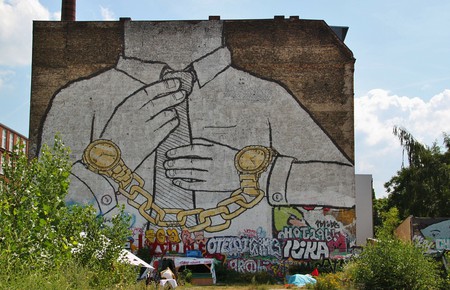 Since then, housing prices have continued to soar in fashionable neighborhoods like Friedrichshain and Kreuzberg. In response, a growing grass-roots movement has succeeded in putting enough pressure on the city to implement certain measures on gentrification; and they took to the streets on a recent Saturday afternoon.

Hundreds of demonstrators carrying signs with slogans like “We’re all staying” and “Say no to crowding out” hit the streets in protest of rising rents, forced evictions and pervasive real estate speculation. As more and more people flock to get their piece of the paradise of Berlin, rents continue to rise as this eager generation is willing to pay more than locals can afford, driving them further out of the city. “People are finally starting to defend themselves,” remarked Sara Walther, one of the organizers of the protest. 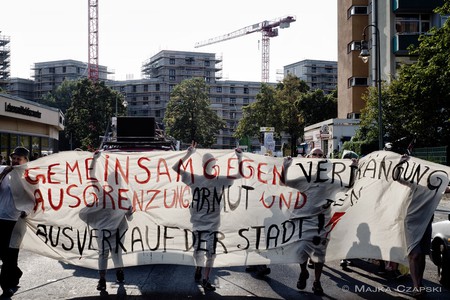 In 2016, protesters march against the backdrop of housing developments and cranes | © Majka Czapski/Flickr

Rising rents and lack of living space is one of the most important issues in Berlin. However, affected Berliners have begun to take matters into their own hands, and under pressure from a growing grass-roots movement city authorities have started to put into effect various measures, including rent caps, a partial ban on vacation rentals, development-free zones and increased social housing subsidies. The aim is to keep the inflated housing market in check and preserve the diverse social and cultural makeup that makes Berlin beloved of so many of its citizens. 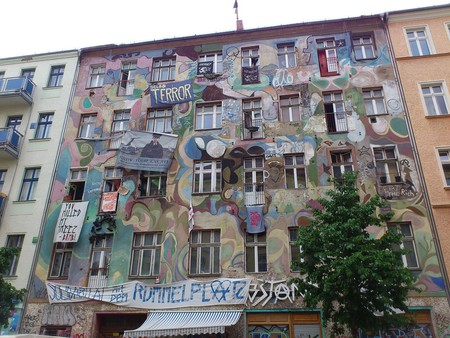 Tenants in iconic buildings like this are fighting against gentrification, exclusion and the unchecked and politically supported profitering of property developers | © Pixabay
Give us feedback