The Best Spa Hotels in Berlin 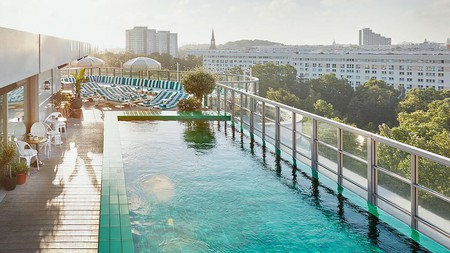 Berlin is well known for its nightlife, museums and architecture, so it’s a good job there are a range of great spa hotels in the German capital where you can relax after enjoying all three. You’ve a choice of locations on the edge of Tiergarten — home to Berlin zoo — in bohemian Prenzlauer Berg, trendy Friedrichshain, on the Kurfürstendamm shopping boulevard or in the western suburb of Charlottenburg.

In this selection of Berlin’s best spa hotels, you’ve a classic luxury hotel which inspired a 1932 Greta Garbo film, a former HQ of the Reich Youth Leadership — and later the Communist Party’s Central Committee — and a renovated bath house to choose from. 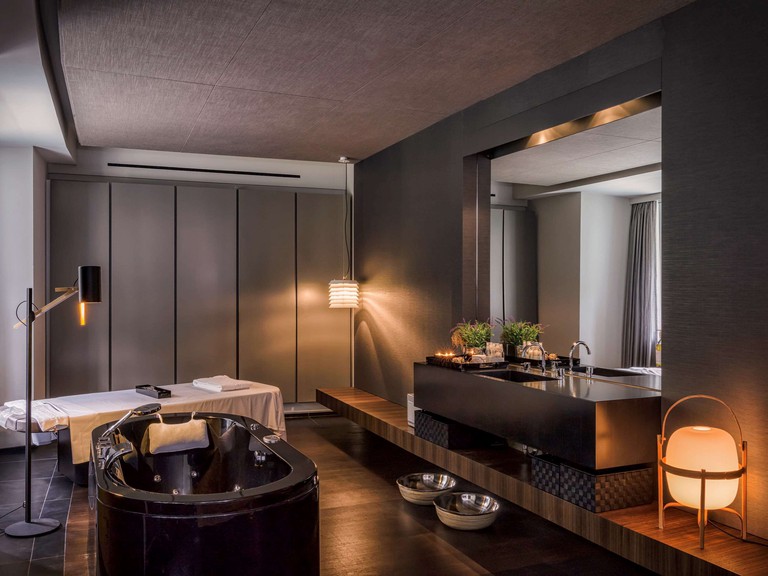 Courtesy of Das Stue / Expedia.com
View Rooms
On the edge of Tiergarten, a giant inner city park that is home to Berlin zoo, Das Stue occupies a building from 1938 with an impressive stone staircase in the lobby beneath an enormous stuffed crocodile head. The rooms are elegant, austere and modernist with wooden flooring and high ceilings. The spa features three massage rooms, a sauna, gym and pool, with a large number of treatments on offer.
EVERYTHING YOU NEED TO KNOW 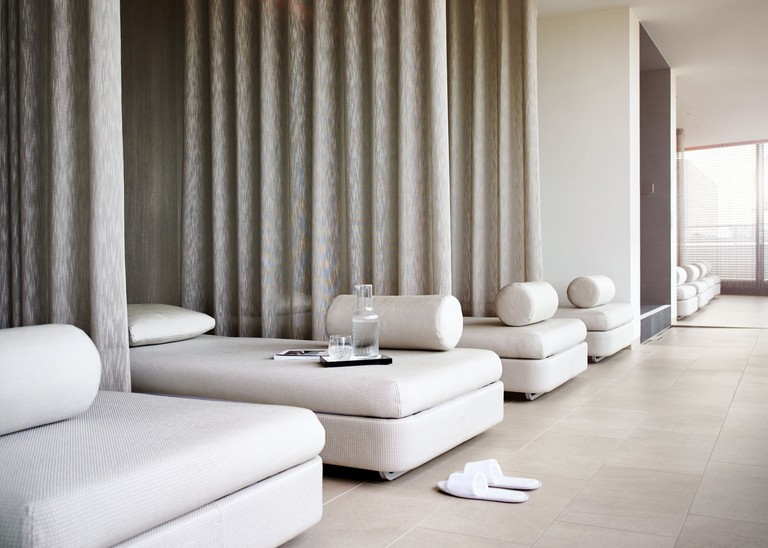 Courtesy of the Mandala Hotel / Expedia.com
View Rooms
The 11th floor of this minimalist five-star hotel a few steps from Potsdamer Platz houses the 600sqm (6,500sqft) high tech ONO Spa. You can try the Iyashi Dôme, described as an ‘infra-red wellness-couch’ which tries to recreate the effects of a traditional Japanese sauna. High end FACIL restaurant has a rooftop terrace. From the evening gourmet menu, you order by the number of courses you want — starting at four and going up to eight — and the Wagyu flank steak with Shiro Miso and bergamot is amazing.
EVERYTHING YOU NEED TO KNOW 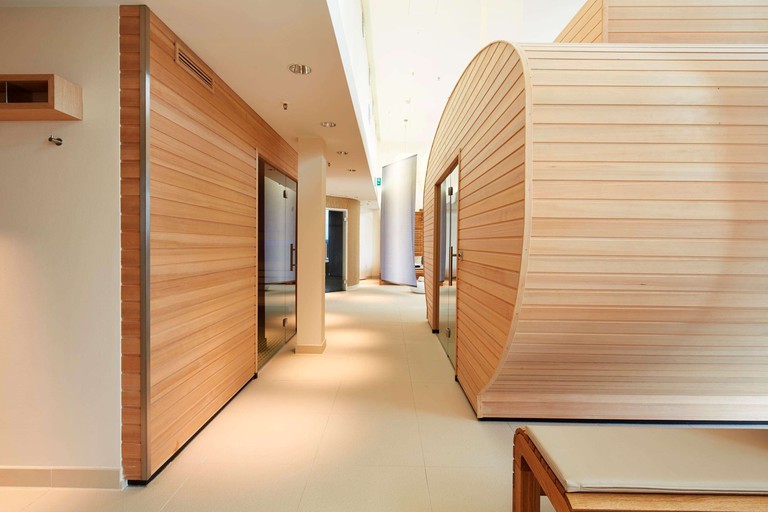 Courtesy of Steigenberger Hotel am Kanzleramt / Expedia.com
View Rooms
This modern glass-fronted five-star hotel is adjacent to the Hauptbahnhof, Berlin’s main train station, and has more than 300 rooms. The Sky Spa and Fitness Centre has three saunas, allowing you to choose a temperature between 60C and 90C. There’s also a quiet zone, gym and treatments on offer including relaxation rituals, massages and facial treatments. Capital Beach bar just across the river has deck chairs by the water which are great for enjoying your beer with some casual house music in the summer.
EVERYTHING YOU NEED TO KNOW 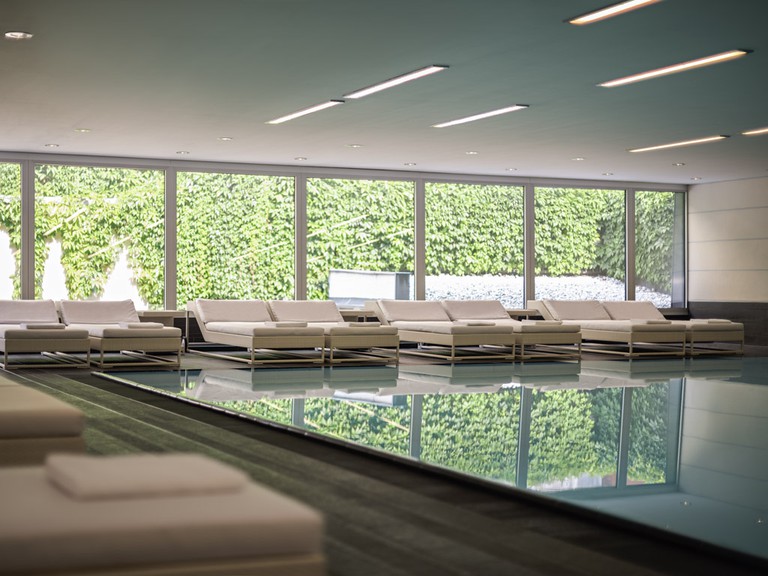 Courtesy of Pullman Hotel Berlin / Expedia.com
View Rooms
Also next to Tiergarten, the Pullman is a large modern hotel with some eye-catching features in the lobby, such as rows of neon lights hanging from the ceiling which change colour and pillars which are black-and-white striped in part, while the rest is bright cyan. The rooms are less striking, with muted colours, C.O. Bigelow cosmetic products and blackout curtains. You can choose between a classic, fitness or relaxing energy massage at Fit and Spa Lounge, there is high end Kinesis gym equipment and vitamin cocktails to be had at the Pool Bar.
EVERYTHING YOU NEED TO KNOW 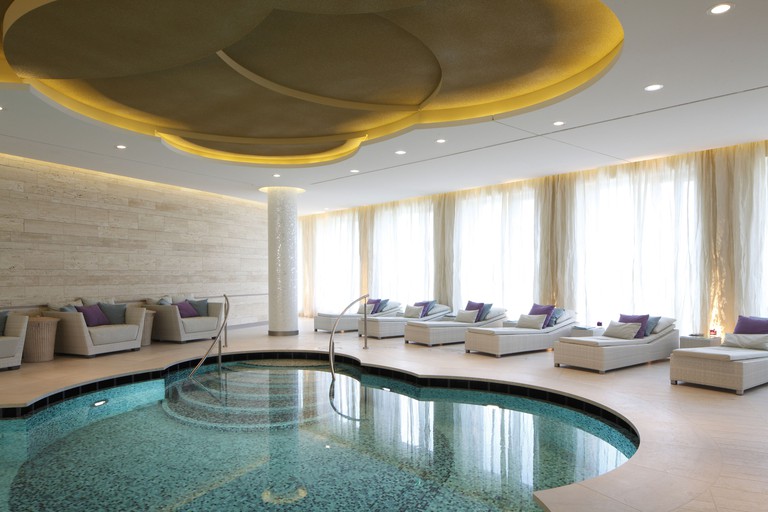 In the western Berlin suburb of Charlottenburg, the Waldorf Astoria Berlin has a distinctive cloud-shaped pool and is the only spa in Germany by Parisian beauty brand Guerlain. There’s a pool, sauna and steam room plus six therapy rooms for personalised treatments. The 15th floor Library Lounge is great for enjoying afternoon tea against a backdrop of city views. 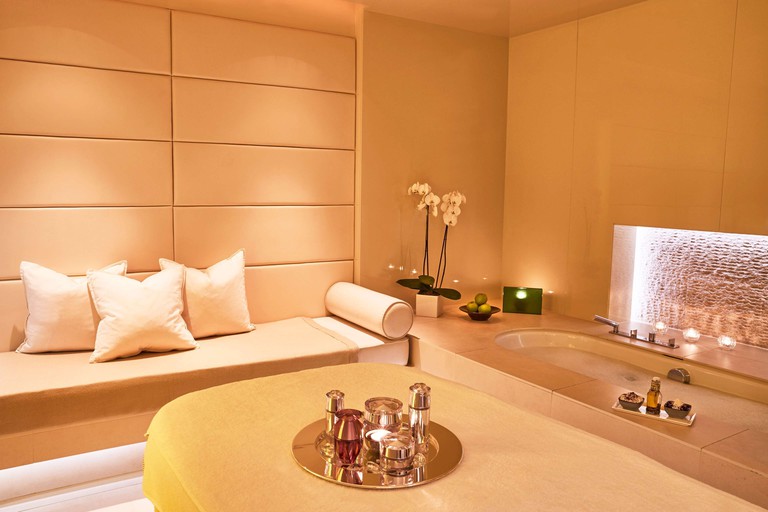 Hotel Adlon Kempinski Berlin is one of the best-known luxury hotels in the city, identified with Greta Garbo — her 1932 film Grand Hotel was inspired by it — Doctor Who — it featured in a 2011 episode — and, unfortunately, the incident in which Michael Jackson dangled his infant son Blanket over a balcony. In the Mitte district, its 835sqm (9,000sqft) spa is spread over three floors of neutral tones, marble, and mosaic patterns, plus there’s a heated pool. You must try the hotel’s signature reinterpretation of a German culinary classic, the ‘Adlon-Currywurst‘ with its secret-recipe sauce. 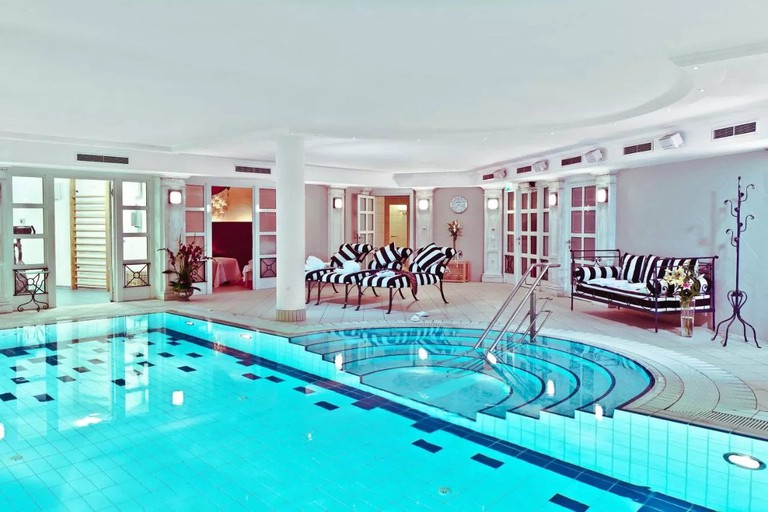 This restored Prussian-era mansion on the Kurfürstendamm shopping boulevard has antique furnishings, handmade stained glass windows and spacious suites. The treatments at the basement spa are curated by former Olympic diver Ditte Kotzian and as well as massages, feature Ayurvedic health, yoga and mindfulness, plus coaching, counselling, Reiki and children’s treatments. You can pick up a book in the hotel’s library to enjoy on a lounger next to the heated indoor pool. 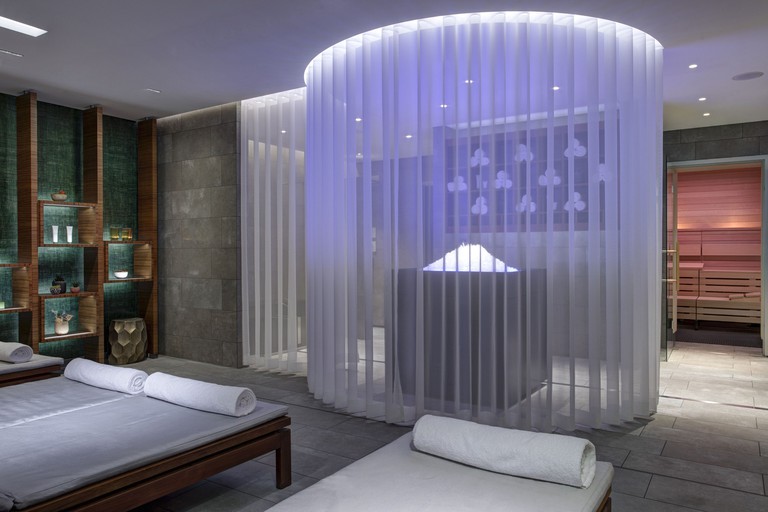 Built in 1889, the Hotel de Rome in Mitte is among Berlin’s best hotels and was once the headquarters of the Dresdner Bank. Behind a reinforced steel-plated door in the former jewel vaults is the De Rome Spa. You’ve an indoor pool, a Finnish sauna and a steam room, plus yoga and pilates classes and six treatment rooms. Each of the hotel’s 145 rooms and suites is fitted with a king-sized bed. 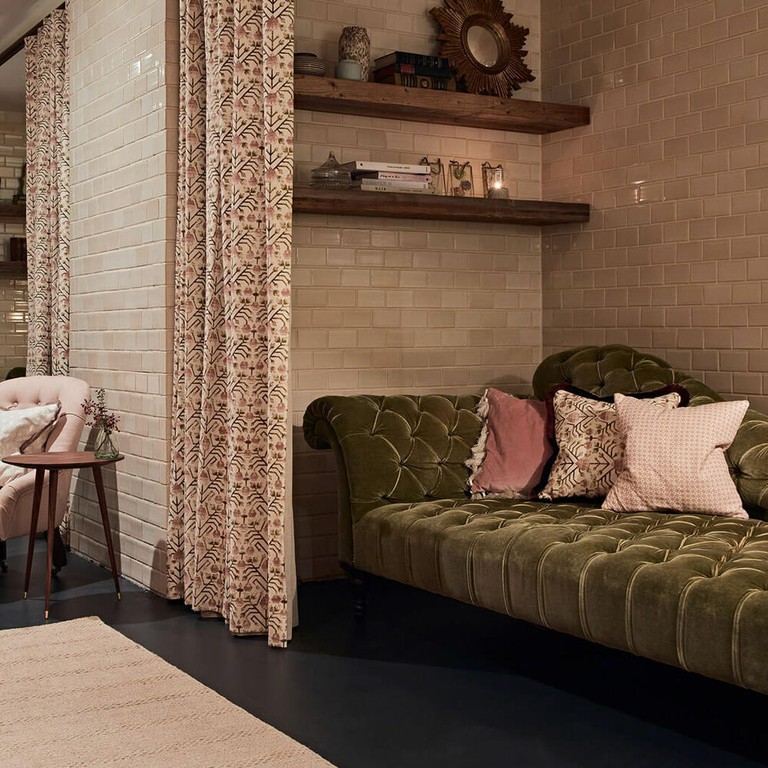 This Mitte landmark has a storied past, first as a seven-storey department store in the late 1920s, then as the HQ of the Reich Youth Leadership and, after the war, home to the Communist Party’s Central Committee. Now, as hipster haunt Soho House Berlin since 2010, it boasts the Cowshed Spa, with velvet chaises, a traditional Turkish hammam and relaxation pods. The spa offers Cowshed Parties, giving gatherings of five or more exclusive use of the space with two treatments per person, snacks, a gift bag and other extras. 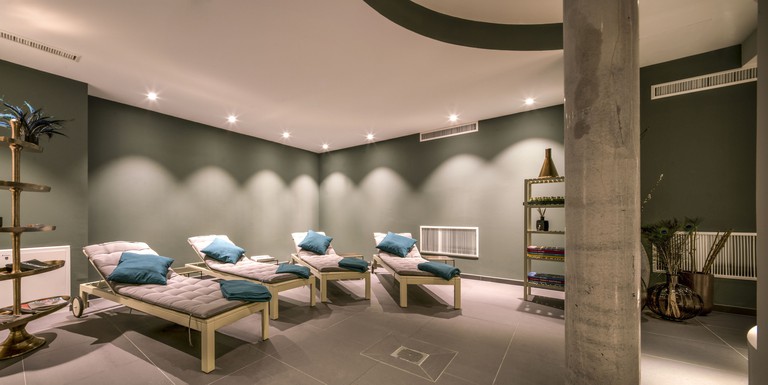 The Stadtbad Oderberger in Prenzlauer Berg has been through multiple incarnations since it opened in 1902, first as a public bathhouse then, after it was forced to close in 1986, an art exhibition space. It was renovated and reopened as a hotel in 2016 with the pool area still at its heart, featuring a 20m (65ft) swimming pool and a Finnish-style sauna, while the oak floors and high ceilings of the suites allow you to experience true Berlin Altbau (old building) living. 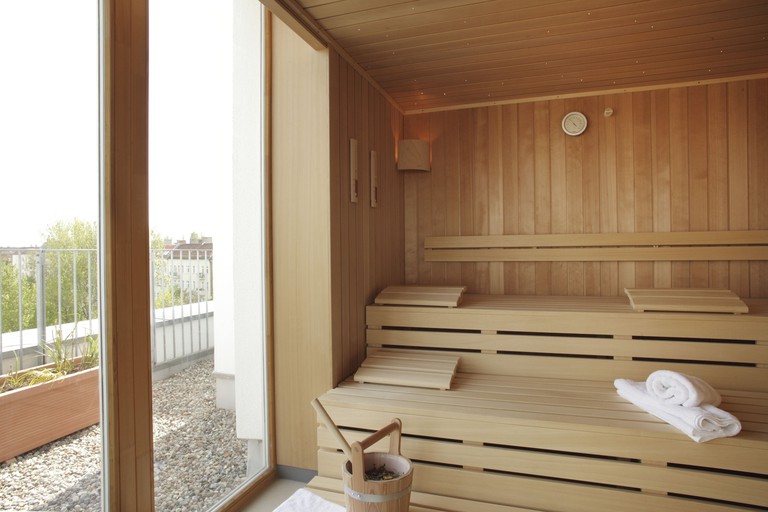 The Almodóvar Hotel on Boxhagener Strasse has a rustic aesthetic that suits its location in trendy Friedrichshain. The hotel prides itself on an approach that is eco-friendly, energy-saving, ethical and sustainable, with its Bistro Bardot focusing on vegetarian fare. The rooftop spa is a minimalist and understated space with beanbags, a Finnish sauna and great city views. You don’t have to leave the comfort of your room for a massage either – book at reception and a professional massage therapist will come directly to you.