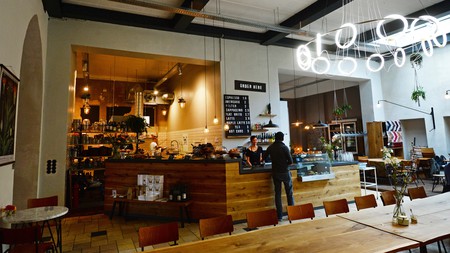 Berlin has a strong freelancer culture, as creatives, digital nomads and tech-savvy entrepreneurs keep flocking to the city to be a part of the thriving start-up scene. The city is full of co-working spaces but some people prefer to keep it casual (and affordable) by working out of a trendy cafe. Here’s our favourite pick of the most work-friendly coffee shops in Berlin. 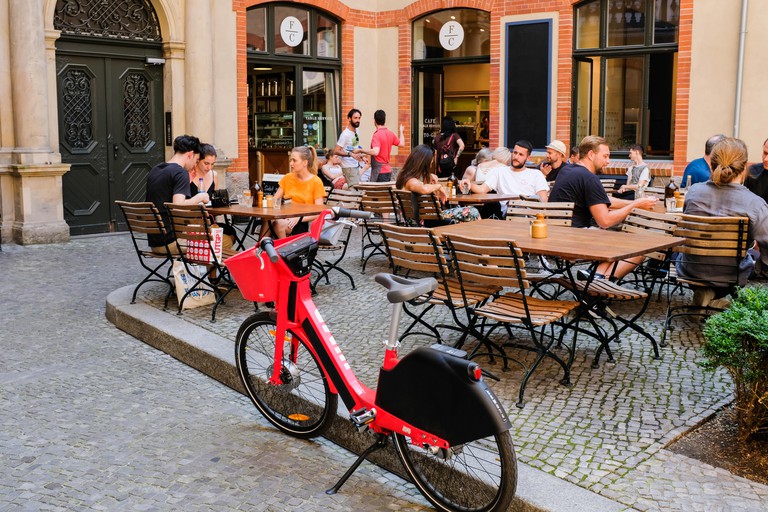 Poached organic eggs with spinach, or seed-topped avocado toast, make perfect brain fuel for morning stints at the laptop – and the gooey vegan banana bread is famous. Elegant tiles and artfully distressed walls, decent-sized surfaces, bold paintings and a calm-but-busy vibe make a winning combo too. On warmer days, take your cup of lightly roasted Fjord coffee outside, if the wifi will stretch, to work at one of the tables on the picturesque cobbles of historic courtyard off Münzstrasse.

There’s no point heading to Neumanns if you’re not going to try a slice of homemade sourdough with braised fennel and goat’s cheese or a melt-in-the-mouth cinnamon swirl – the smell of baking bread will break even the most resilient spirit. Make sure you book ahead if you don’t want to wait for a table. Alternatively turn up when it opens at 9am to beat the crowds. When it’s time for a break, stretch your legs under the linden trees in neighbouring Boxhagener Platz. The regular Sunday flea market is a stronghold of vintage clothes and vinyl, guaranteed to kick start creative ideas.

We love this place on a cobbled side street near the busy Nordbahnhof and S1 train line. The rough wooden bar serves nutty cakes and Instagrammable coffee from 8am on weekdays, so hard-working freelancers can get a head start. Industrial-chic decor with unpainted concrete and exposed wiring is softened by Scandi-style log walls and paintings by local artists. Anywhere this good is popular, of course, so it’s worth knowing that a second branch, near the Nordic Embassies on the edge of leafy Tiergarten, has more room and a Norwegian canteen upstairs. 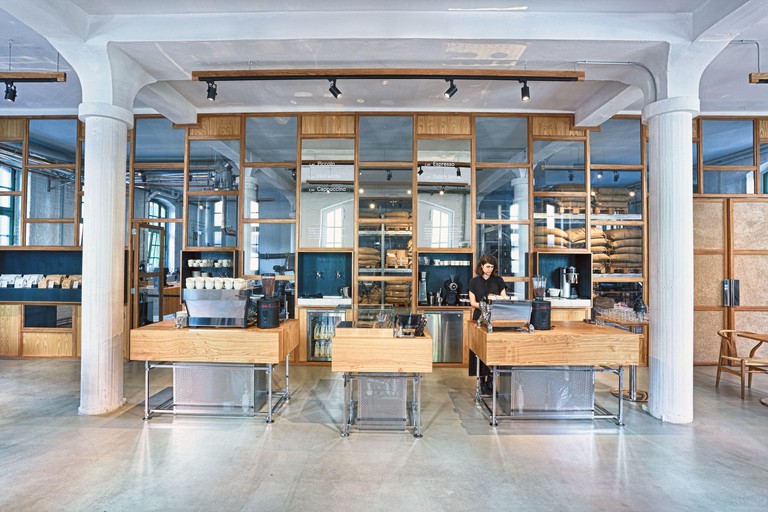 The third-wave coffee movement in Berlin was led by artisanal pioneers such as Bonanza, who set up in 2006. The original Heroes cafe, opposite the Mauerpark, had bar stools on which caffeine heads tasted their sought-after specialty brews. Now they supply venues from Michelin-starred restaurants to hipster cafés in Seoul. If you’re serious about work, try the second Bonanza branch, which opened a decade after the first in a back alley in Kreuzberg. What was once a brick-walled factory now houses an invitingly airy, minimalist space with big windows, pot plants, wooden tables and a window onto the roastery. 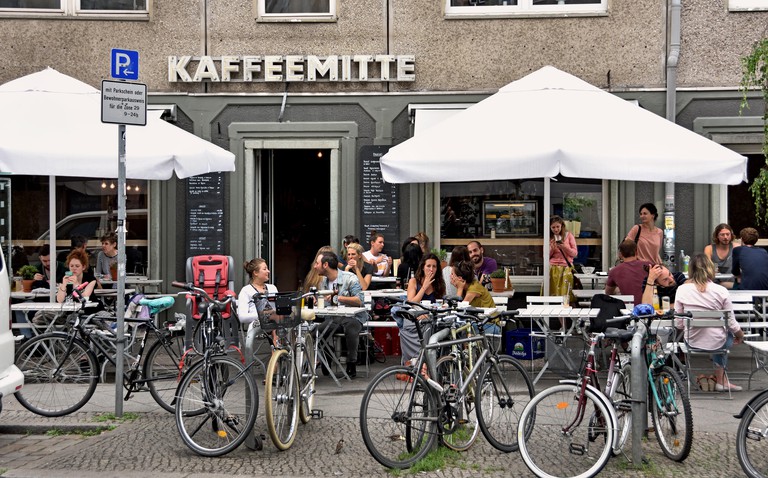 If you need a working meal, head to Weinmeisterstrasse, in the central Mitte district. Cosy KAFFEEMITTE, right near the U-Bahn, serves massive brunch platters featuring homemade hummus, guacamole and pesto with fresh rolls and fruit. Despite the name, it’s not all about the coffee here; there’s hot milk and honey, homemade mint or ginger tea and freshly squeezed orange juice. They may not take credit cards (or provide wifi) but a peaceful spot and hearty meal so close to bustling Alexanderplatz is not easy to find.

Close to Checkpoint Charlie, the Cold-War era crossing point between East and West Berlin, Westberlin is a hip cafe with stable wifi connection. It’s the perfect spot for early birds, who can start working during the week from 8.30am. The cafe has a sleek, modern interior and a fine selection of magazines – you’ll need discipline not to get distracted. A range of specialty coffees provides a caffeine hit for productivity. If you need a vitamin shot, there are fresh juices to boost your brainpower. 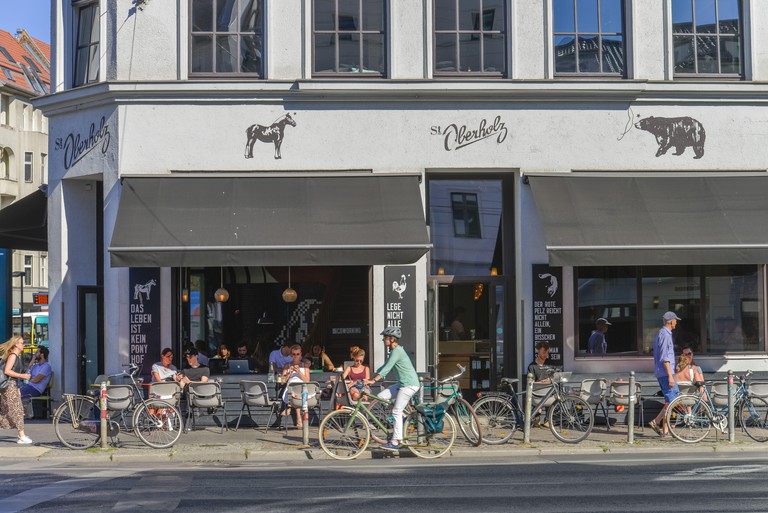 Founded in 2005, this cafe provides creative co-working spaces with wifi and great coffee – hence the appeal among start-ups, freelancers and digital nomads. This branch (there are a few now) is on Rosenthaler Platz, in an iconic three-storey building once home to beer-hall group Aschinger. Nowadays, there’s free wifi in the downstairs cafe and day passes for the upper level which offers better wifi and a quiet work area with spaces for teams to chat.

Beautiful Hallesches Haus is trendy and multipurpose, a Kreuzberg general store meets cafe meets workspace. The wooden tables, light interior and slightly industrial feel combine to create an inviting space to work. The wifi is reliable and most freelancers gather together on one long table at the back of the cafe, beavering away while the friendly staff drift about bearing delicious coffee and lunch orders. Hip-hop, house and soft electronic music will often thump in the background. 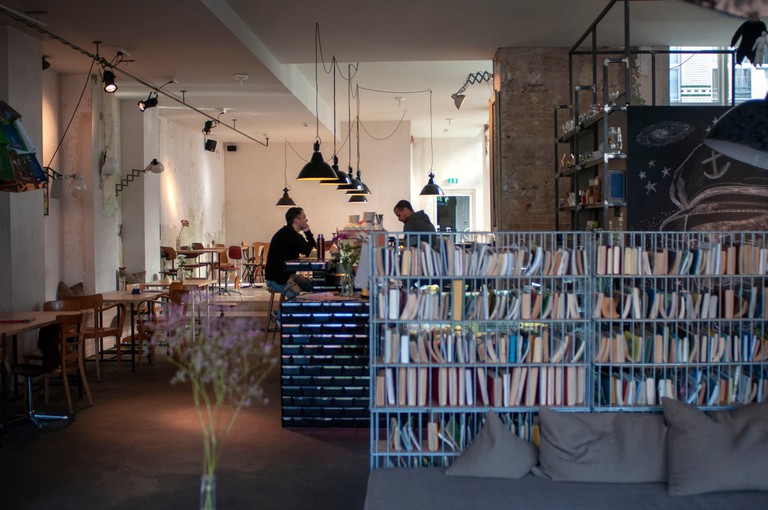 The musicians, artists and creatives of Berlin make a beeline for the Michelberger Hotel on bustling Warschauer Strasse, where it passes through the trendy Friedrichshain district. It has a sleek, trendy ambience and is a great place to work for people wanting to be surrounded by inspiring talent. The cafe is open early in the morning and is a great place for a quick lunch, drink or an al fresco beer or two with friends. It transforms into a wine bar at 5pm, turning out delicious snacks and wines from small producers. There’s a DJ playing from Thursday to Sunday to help get you in the mood for the evening.

Betahaus was the first co-working space in Berlin and fosters a creative energy in the Betahaus Cafe. Filled with tech-savvy freelancers, entrepreneurs and businesses, the cafe is a great place to work undisturbed, and to meet inspiring like-minded people. The light lunch menu changes weekly, so you won’t grow tired of what’s on offer, and tech-related events are held regularly for members as well as the wider community. It’s the perfect spot for early-bird workers, as the cafe opens at 8am, so you can get ahead with your tasks first thing.

On a quiet square along Boddinstraße, in the trendy Neukölln district, Schankwirtschaft Laidak is a casual cafe with a lovely laid-back ambience. With cheap drinks, a relaxed atmosphere and comfortable chairs and tables from which to work, this is a perfect spot to make serious inroads into that looming project. Open daily from midday, it’s tailor-made for late risers, emanating cool Berlin energy, delivering good wifi and providing a cosy spot to get productive.