Unité d’Habitation | © Petermalewski/WikiCommons
Due to its edgy and experimental culture along with the fact that most of its buildings were destroyed during World War II, Berlin is an architecturally volatile city. For the past several decades, architects have found a haven in this city for implementing a great variety of cutting edge designs. Here are some of the most intriguing architectural gems in Berlin.

Building, Museum
The Bauhaus-Archiv was completed in 1979 | © Peter Delius / Alamy Stock Photo
Walter Gropius founded the Bauhaus school in 1919 — it was a means of sharing the radical ideas of the day with young artists in attempts to rebuild war-ravaged Germany in a new way. Completed in 1979, the building itself was created in Bauhaus style under the direction of the movement’s founder. Today, the Bauhaus Archiv is a famous Berlin institution dedicated to commemorating the Bauhaus movement in art, architecture, and design. For these reasons, the Bauhaus Archiv is still an important site of architectural instruction, in addition to giving a detailed overview of all things Bauhaus.
More Info
Open In Google Maps
14 Klingelhöferstraße, Berlin, 10785, Germany
+49302540020
View menu
Visit website
Visit Facebook page
Send an Email
Give us feedback

The Jewish Museum in Berlin provides an in-depth history of Jewish people living in Germany and beyond — before, during, and after the Holocaust. The museum serves to honor the Jews of Europe by providing a broader context of their life on the content beyond the horrors of the Holocaust. Legendary architect Daniel Libeskind designed it after winning a competition in 1988 for the rights to do so. This striking museum is comprised of concrete hues of black and grey, sharp angles, and plenty of optical illusions intended to simulate feelings of confinement and disorientation akin to those that Europe’s Jews felt during the Holocaust. 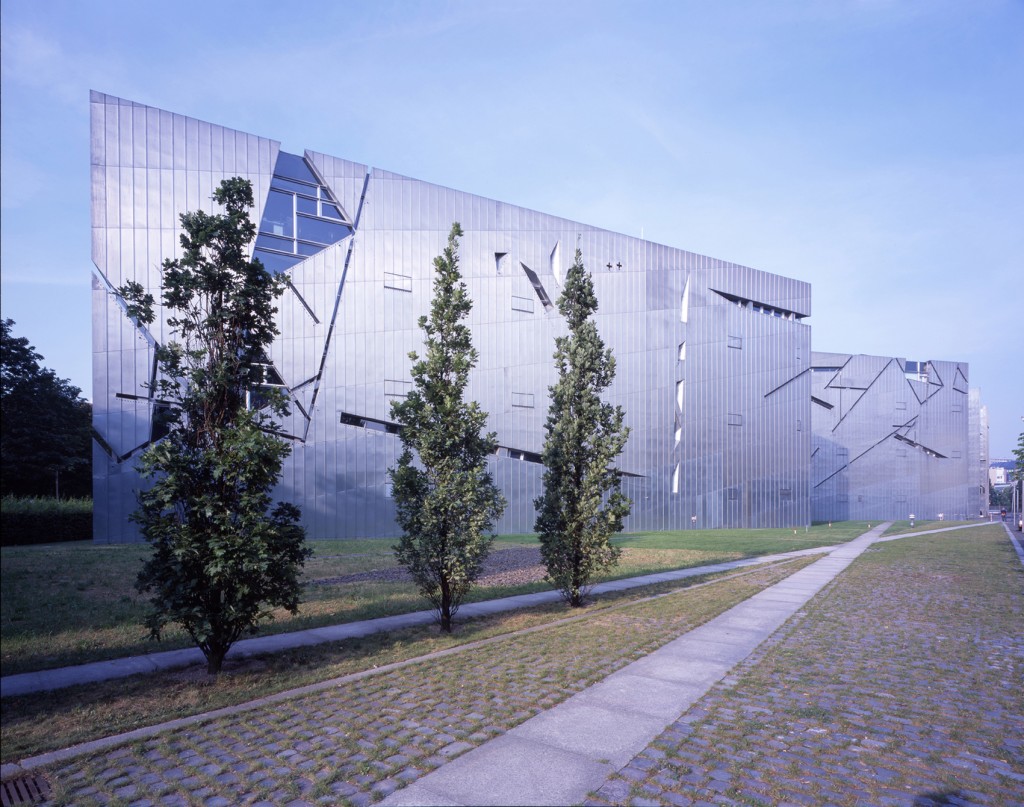 Theater, Movie Theater
Kino International | © Beek100/WikiCommons
No architectural tour of Berlin would be complete without exploring the Soviet Era buildings found on avenues like Frankfurter Allee at the eastern end of the city — one of the most famous and iconic of which is Josef Kaiser’s Kino International. Completed in 1963, Kino International was one of East Berlin’s premiere theaters before the fall of the wall. Now it serves as a historic gem that shows selected pictures and hosts the occasional soiree. Along with the glamorous 60s style décor, the building design invites visitors to step back into a different epoch in the city’s history.
More Info
Open In Google Maps
33 Karl-Marx-Allee, Mitte Berlin, Berlin, 10178, Germany
+493024756011
View menu
Visit website
Visit Facebook page
Send an Email
Give us feedback

Building
The Marie-Elisabeth-Lüders-Haus is situated along the River Spree | © Russell Millner / Alamy Stock Photo
Named after a famous reformer and women’s rights activist, the Marie Elisabeth Lüders Haus is a government building part of the city’s parliamentary complex set in stunning contemporary style design. Stephen Braunfels is the architect behind this masterpiece. The building, completed in 2003, houses Germany’s scientific service center. Its many reflective windows and surfaces project images of the flowing river Spree — that surrounds it — onto its façade. This setup makes it one of the best waterside spots in the city for a stroll on a summer evening.
More Info
Open In Google Maps
1 Adele-Schreiber-Krieger-Straße, Mitte Berlin, Berlin, 10117, Germany
+49302270
View menu
Visit website
Visit Facebook page
Send an Email
Give us feedback

NHow Hotel is one of Berlin’s premiere design hotels, whose primary clientele consists of musicians and producers visiting the city. Situated on the Spree, the ultramodern hotel’s most notable feature is the large, shining cantilever addition situated on top. Inside, the décor is equally sleek, with retro furnishings, clean lines, and bold color accents. It is also outfitted with two fully functional recording studios, and there are guitars available at the desk for loan. NHow Hotel is located in proximity to attractions like the East Side Gallery as well as many prominent spots on Berlin’s nightlife scene including Berghain and Renate. 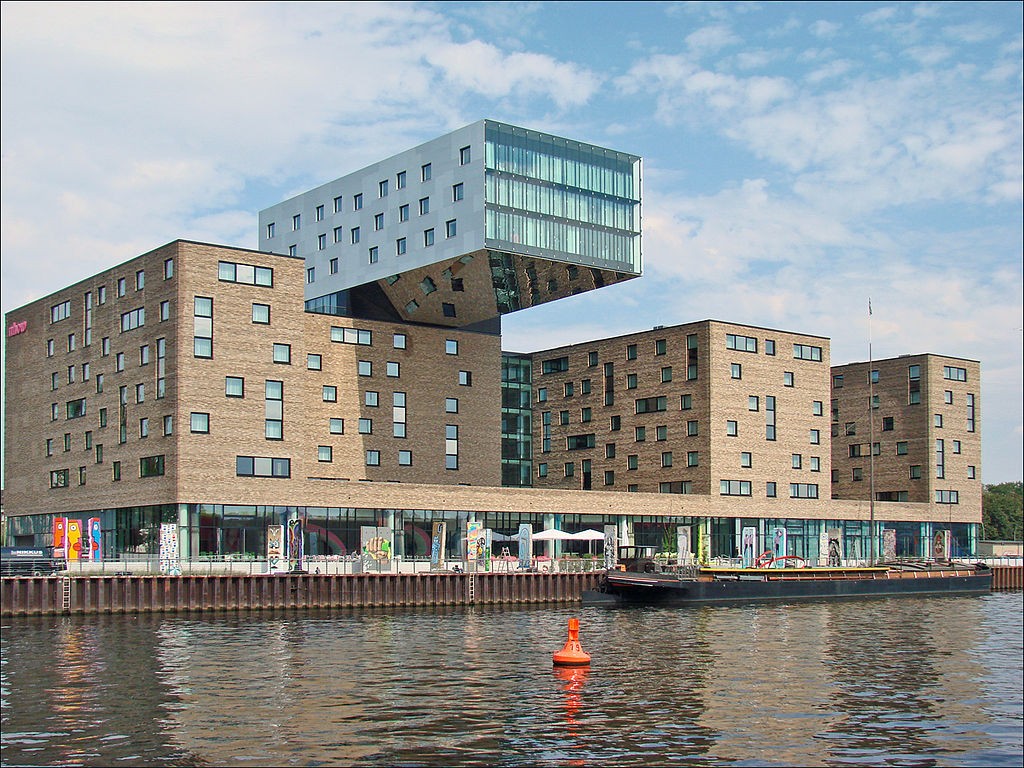 Building, Concert Hall
ICC Berlin | © Avantique/WikiCommons
First built in 1979, Ralf Schüler & Ursulina Schüler-Witte’s International Congress Center is a sprawling building located in Charlottenburg. The ICC is one of the largest conference centers in the world — playing host to a multitude of different concerts, trade shows, exhibitions, and conventions. The building is a staggering 25,600 square meters in area, and it serves as a model for other venues like it. If this building’s cutting edge style wasn’t futuristic enough on its own, one of its most distinguishable features is the adjacent tower ‘Ecbatane — man building his city’ by Jean Ipostéguy.
More Info
Open In Google Maps
11 Alexanderstraße, Mitte Berlin, Berlin, 10178, Germany
+4930238060
View menu
Visit website
Visit Facebook page
Send an Email
Give us feedback

Cathedral, Church
Chapel of Reconciliation | © Ansgar Koreng/WikiCommons
The Chapel of Reconciliation in Berlin Mitte is the product of designs by architects, Rudolf Reitermann and Peter Sassenroth. They were commissioned with rebuilding the original after it was destroyed in 1985, under the unjust GDR orders to eliminate buildings located too close to the Berlin Wall. The new building is oval shaped and comprised of several thousand thin wooden columns. The structure successfully blends the natural with the modern through its unique shape and the earthen materials used to form it. The design was largely inspired by Statue of Reconciliation in England’s Coventry Cathedral, which is a symbol of war’s destructiveness and humanity’s ability to triumph over it.
More Info
Open In Google Maps
4 Bernauer Straße, Mitte Berlin, Berlin, 10115, Germany
+49304636034
View menu
Visit website
Visit Facebook page
Send an Email
Give us feedback

Building
Unité d’Habitation | © Petermalewski/WikiCommons
Unité d’Habitation is a stylish apartment building by the Swiss architect, Le Corbusier as part of the Interbau International Building Exhibition of 1953. Its aesthetic was intended to emulate the common style of French apartment buildings in Marseille of the time. The colorful detailing in its façade set it apart from others like it, however. It is located next to Berlin’s Olympic Stadium near Grunewald Forest. The building contains over 500 flats, and it continues to serve as a housing facility today. It is also possible to take a guided tour of the building to learn more of the ins and outs of its architectural features. Tickets start at Є5 for the 90-minute tour.
More Info
Open In Google Maps
16 Flatowallee, Bezirk Charlottenburg-Wilmersdorf Berlin, Berlin, 14055, Germany
+493030209833
View menu
Visit website
Visit Facebook page
Send an Email
Give us feedback

Building
Netherlands Embassy Berlin | © Achim Raschka/WikiCommons
Many countries have embassies with architectural features intended to highlight various aspects of the country’s aesthetics. The Netherlands Embassy in Berlin was designed by Rem Koolhaas on behalf of the architectural firm, OMA. Constructed in 2004, the building was created with the intent of meshing the conventional look of a civil service building with the openness of the Dutch culture. Therefore, the building — otherwise unremarkable as first glance — has a large asymmetrical window spanning across two sides of its façade.
More Info
Open In Google Maps
50 Klosterstraße, Mitte Berlin, Berlin, 10179, Germany
+4930209560
View menu
Visit website
Visit Facebook page
Send an Email
Give us feedback

Building
Berlin’s Velodrom is one of the city’s primary indoor track and cycling facilities | © creativep / Alamy Stock Photo
Built in 1999, Velodrom is one of Berlin’s primary indoor track and cycling facilities that also serves as Berlin’s largest concert venue. Located in Prenzlauer Berg, the building itself is a flat disc that is set into the ground — a disc spanning across ten hectares. French architect Dominique Perrault won the German Award for Architecture for this design. She also designed the rectangular structure in similar style used to enclose the Olympic pool located on the same compound as the Velodrom. An orchard of apple trees was planted around the unique Velodrom.
More Info
Open In Google Maps
26 Paul-Heyse-Straße, Bezirk Pankow Berlin, Berlin, 10407, Germany
+4930443045
View menu
Visit website
Visit Facebook page
Send an Email
Give us feedback
Give us feedback