Berlin’s Memorial To The Murdered Jews Of Europe 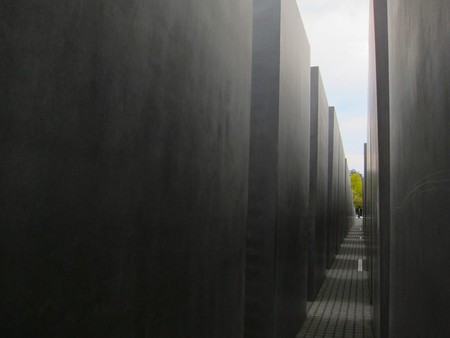 Berlin Memorial to the Murdered Jews of Europe | © Estelle Lassus

It is a rare accomplishment when a monument manages to convey so powerfully the very thing it sets out to commemorate. Yet the Memorial to the Murdered Jews of Europe in Berlin succeeds beautifully in doing so. More than a memorial to observe, it is a memorial meant to be experienced, and what an experience it is.

Also called the Field of Stelae, the memorial covers around 19,000 square meters of ground in the center of Berlin. At first sight, it is a vast plane of cubic concrete towers (2,711), all the same length and width but with varying and irregular heights, like the wavy surface of a grey sea, frozen for an instant. The rows separating the columns are wide enough for one person to walk through, and as you step into the checkered maze, the stelae grow higher and higher and the ground deeper and more uneven.

The towers that at first seemed like solemn tombs for the victims, rise and rise until they become tall walls and their shadows swallow you. The light from the sky is still there, above, but somehow it feels far away, and whoever came in with you through another path seems distant, visible only through momentary glimpses. It is as if you were alone, surrounded by immensity yet unable to see it, your sight trapped between endless towers. Sounds, views, everything is fragmented, chopped off at an irregular rhythm as you walk onward.

The feeling some people get is somewhere between an introspective contemplation and a glimpse into the loneliness of the victims caught in the horror of their time. The dense and smooth concrete as well as the cold and sharp rectangular shape of the towers convey a powerful sense of depersonalization and namelessness, as if all the people who had to walk these paths were forced to lose their identity, their status, their names, even their very nature.

As if all that happened was beyond words and description – and that words could never come close enough to what happened – heavy silence is sometimes the most eloquent. Between these chilly and dark walls of history, the visitor is plunged, alone, into reflections on the past, of human nature, of society-wide madness. As you walk out and surrounding sounds start to get clearer once again, you slowly end this excursion inside your own consciousness and come back to the outside world, perhaps carrying with you a certain reminder that the human collective mind can easily slip into illusive extremes. 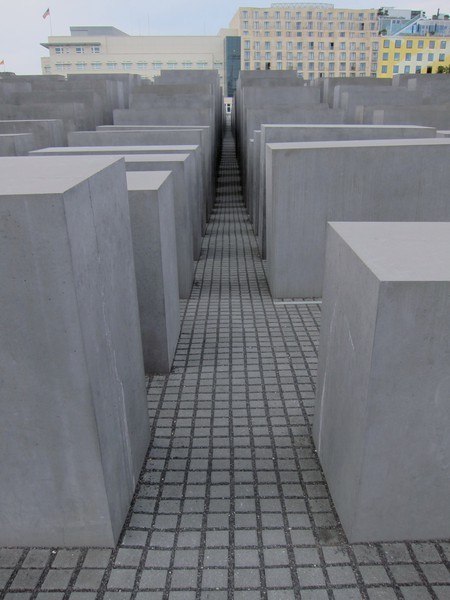 Of course, everything depends on context, and a memorial is subject to its environmental conditions. A sunny day crammed with tourists, loud and running children playing hide and seek, silly adults hopping on the stelae and taking selfies in outrageous poses will change your experience quite a bit and turn the whole place into a giant playground. There is, however, no point in feeling scandalized about it. A guard, in charge of a territory much too vast for him, tries vainly to prevent people from jumping around, to secure a certain solemnity to the place. But children will be children, and it is up to the people themselves to open up their sensibility, to make themselves available to the experience, to receive something worthwhile and nourishing. There is no point in imposing anything. People shouldn’t forget that the memorial is a public space, a part of the city. To some degree it is up to the people to inhabit it, move in it, experience it the way they genuinely feel like. If joy is the dominant mood some people experience in this place, one could see it as a celebration of the lasting and ever-powerful bliss of life that returns even after dark times. After all, nothing is static and all works of art are open to interpretation and appropriation. 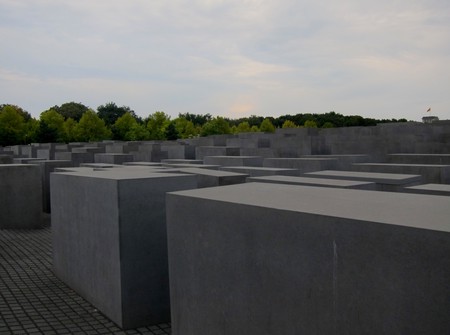 More concretely, the memorial was designed by Peter Eisenman, an American architect known for his radical designs. The idea of building a memorial to the murdered Jews of Europe first emerged in 1989, as a citizen’s initiative. However, due to various circumstances and after several selection procedures, it was only in 1999 that the German Federal Parliament (the Bundestag) voted for the construction of the Holocaust memorial following Eisenman’s design. The construction of the memorial itself, along with an information center displaying a historical exhibition surrounding the Holocaust and its victims, began in 2003 and finally opened to the public in 2005. It caused quite a stir back then and is still a source of discussion and debate nowadays.

Many view the Field of Stelae as problematic. The choice of such an abstract design makes some people feel it is too disconnected from the Holocaust, unable to properly reach out and educate the public or even suggest any relation to the events of the Second World War. Its official name, the Memorial to the Murdered Jews of Europe, is also criticized for its vagueness, failing to situate the context and designate the perpetrators of those murders. The arguments are strong and pertinent, showing that the memorial is far from satisfying most opinions. One could, however, suggest that the monument being a perpetual subject of discussion and evoking diverse reactions is somewhat proof of its success. By the very absence of unanimity around it, the Memorial to the Murdered Jews of Europe somehow fulfills its role in keeping the memory of the horrors of World War II alive in the present debate. How humankind deal collectively with such a historical legacy is a crucial question that should perpetually be reflected upon. Making people react, either for or against it, is a constant trigger of that reflection. A monument too plain to create turbulence and succeeding in gathering a vague consensus, we can imagine, would just sit around on a dusty shelf, amongst the other ‘solved issues’, and would rarely be heard of again.