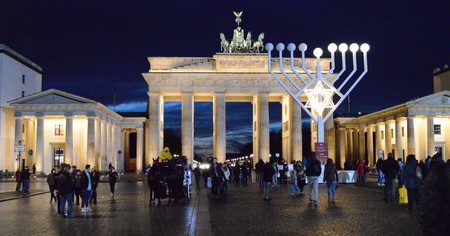 Why are we drawn to certain cities? Travel writer Rory MacLean describes his love affair with Berlin and explores its complex, dramatic history.

Perhaps the reason we are drawn to certain cities is because of a story read in childhood. Or maybe simply because the place touches us, embodying in its towers, tribes and history an aspect of our understanding of what it means to be human.

Berlin is all about volatility. Its identity is based not on stability but on change. No other city has repeatedly been so powerful, and fallen so low. Few cities have inspired so many artists or witnessed so many murders. It’s a capital made up of villages. It’s a city where history broods. Its legends, both real and imagined, stalk the streets: Lenin drinks at the same café as Bowie’s heroes, Wim Wenders’ trench coat wearing angels wing above torchlit Nazi processions, Speer conjures myths from the same canvas as George Grosz, Dietrich shops alongside Sally Bowles at KaDeWe, le Carré’s George Smiley watches the packed trains leave for Auschwitz.

An aerial view of Berlin, 1941, with the Brandenburg Gate in the distance | © Cci/REX/Shutterstock

I was once a Canadian born in the baby boom era, ‘doing’ Europe; a child of the most liberal and stable nations. During a happy, footloose summer I climbed the Eiffel Tower, tripped down the Spanish Steps, and on the last week of the holiday I saw the Wall. The sight of that brutal barrier shook me to my core. At the heart of the continent were watchtowers, barbed wire and border guards who shot ‘defectors’ because they wanted to live under a different system. I knew the history. I understood what had happened. But I couldn’t conceive how it had happened. The individuals whose actions had divided Germany and Europe – the wartime planners, the Soviet commissars, the Grepo – weren’t monsters. They were ordinary men and women. I ached to understand their motivation, how they came to act as they did, yet at the same time I was repulsed by their crimes and needed to give voice to their victims’ suffering. A decade would pass before I began doing that, putting pen to paper, writing my first book as the Wall fell, then another 15 years and six more books before I settled in the city.

Berlin’s unpredictable undercurrents have long attracted artists. The historian Peter Gay wrote that living in the city in the Golden ’20s was the dream of ‘the composer, the journalist, the actor; with its superb orchestras, its 120 newspapers, its forty theaters, Berlin was the place for the ambitious, the energetic, the talented. Wherever they started, it was in Berlin that they became, and Berlin that made them famous.’ During the Weimar years it was the world’s most exciting city. Here Walter Gropius conceived the Bauhaus, Weill penned The Ballad of Mack the Knife and Isherwood immortalized the cabaret. Nabokov, Kafka, Auden and Spender were inspired in its cafés. At Babelsberg Studio, Fritz Lang filmed Metropolis while von Sternberg and Dietrich created The Blue Angel. For 10 breathless years, artists and intellectuals danced on the edge of a volcano. When their vision of a new world was rejected by Germans in 1933, the year Hitler became Chancellor, Berlin’s exiles carried their new modernity abroad.

Early on, however, this city had a different start. Situated on a long plain of marshes stretching as far as Warsaw, Medieval Berlin was an uncultured spot. Christianity did not take root here until the 12th century. Robber barons and the plague besieged the primitive outpost as late as the 15th century. It was the Hohenzollern princes who wrested a capital from the swamps with hard work and immigrants. But the princes’ obsession with military power also laid the foundations for the bullish force of Prussia, the ‘army within a state’ which aspired to European domination. It’s no wonder that Goethe loathed the place, equating it with the devil’s world.

At the outbreak of the First World War, Berlin was a grandiose capital dominated by pomp, parades and overbearing buildings of immense ugliness. ‘Groups of people everywhere, and in addition, soldiers marching out of the city, showered with blossoms as they went. Every face looks happy: we have war!’ cheered the actress Tilla Durieux in 1914. But within a year disillusionment had set in and, by 1918, some 350,000 young Berliners had been killed in action. The ignominy of defeat and the vindictive Versailles Treaty made the returning troops ideal candidates for radicals on both the left and right. Revolution, insurrection and political assassinations characterized the next desperate years and – along with the wild inflation of 1922-23 – shattered respect for tradition.

Then, in 1924, the American-led Dawes Plan stabilized the mark, fueling a bubble of prosperity and stimulating a remarkable cultural flowering that bridged east and west and transformed Berlin into the international capital of Modernism. Almost overnight the population boomed, industrial output soared above pre-war levels and Germany became second only to the US in the value of its exports. The city pulsated with life and easy money. Hungry for experimentation, artists from Britain, France, America and Russia moved to Berlin, attracted by creative and sexual freedom, as well as by the least repressive censorship laws in Europe. Heinrich Mann called it ‘a city of excitement and hope’. But for all its frenzied, prodigious output, the decade was golden for only a small minority, many of whom were outsiders. 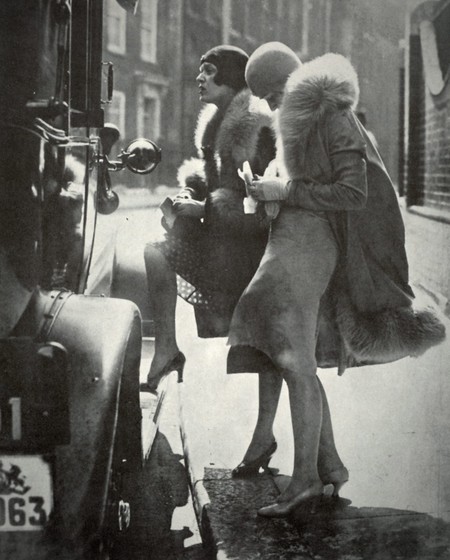 In 1926, a young Joseph Goebbels – another of many ambitious storytellers – arrived at the Anhalter Bahnhof, determined to ‘take the city’ for an aspirant Hitler. At the time there were fewer than 200 Nazi Party members in Berlin, while the Communists boasted a membership of 250,000. In an audacious move Goebbels cast the Communists – along with the Jews – as the scapegoats for society’s ills. He orchestrated hundreds of street battles against them to gain publicity. He took advantage of the resurgent financial crisis and, after 1929, of mass unemployment: one-third of the city’s labour force was out of work towards the end of the Great Depression. His Machiavellian mastery of propaganda exploited the suffering of Berlin’s majority; like most Germans they embraced the Nazis’ radical solutions in response. In the month following Hitler’s accession to power over 50,000 Berliners joined the Party. 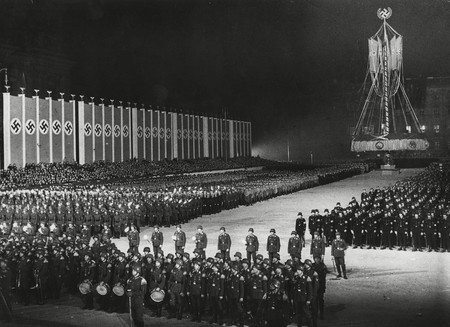 The minority, left-wing avant garde was easily destroyed. German literature went up in smoke in the 1933 book burnings. Bertolt Brecht, Alfred Döblin, Mann and many other writers fled the country, alongside Lang, Einstein and Mies van der Rohe. With the Nazis’ arrogant triumph Hitler proposed rebuilding Berlin as ‘Germania,’ the new capital of the populist, nationalistic ‘Thousand Year Reich.’ ‘In 10 years no one will recognize the city,’ he boasted. During the Second World War more bombs fell on it than on the whole of England. By 1945 three-quarters of the city lay in ruins. 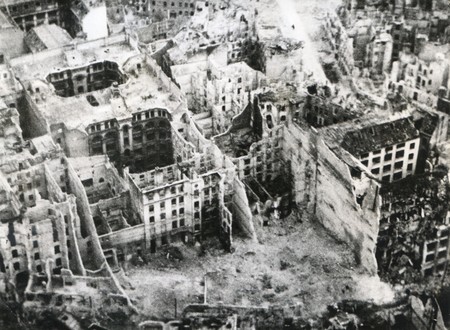 The victorious Allies divided Berlin into four sectors. Stalin’s secret intention was to draw it – and then the whole of Germany – into the Communist orbit. In 1948 he blockaded the city as a means of driving the Americans out of Europe, but the Allies retaliated by launching the Berlin Airlift to sustain its freedom. With the brutal suppression of the 1953 uprising, hundreds of thousands of East Germans began moving west, forcing the Communists to close their escape route by building the Wall. Behind it East German literature flourished, though not necessarily in print due to strict censorship. In the encircled western sectors writers struggled to come to terms with the recent past, handicapped by both widespread denial and young men moving to West Berlin only to escape military service, their spirit of refusal emasculating criticism and engendering self-indulgence. The return to literature of quality – influenced by the residencies of Heinrich Böll, Wolf Biermann, Günter Grass and Uwe Johnson as well as Ryszard Kapuscinski, Cees Nooteboom and Susan Sontag – was accelerated by reunification. The city has emerged from its dark anger to become again a creative capital of Europe: cool, experimental, bohemian, with cheap rents and an irony-free exuberance that attracts aspiring scribblers and the international cultural elite alike. East and west, German and foreign, meet once more, as illustrated in the work of Thomas Brussig, Bernhard Schlink and Uwe Tellkamp, Jeffrey Eugenides, Jonathan Franzen and Imre Kertesz.

Today I ride my bicycle past the site of the wooden observation stand where I decided to become a writer, across the former death strip, to the glittering glass and steel phoenix of Potsdamer Platz. Near it is the Holocaust Memorial, the undulating labyrinth of concrete plinths that commemorate the murdered European Jews. The black husk of the Kaiser Wilhelm Memorial Church, destroyed by Allied bombs in 1943, casts a long shadow along buzzy Kurfürstendamm. At my son’s school, an old brick wall is still pockmarked from machine gun fire. A young German painter told me recently, ‘I do not want to say that they – the SS officers, the guards by the Wall, the Stasi interrogators – are like us. It is different, worse I guess. They are us – and we would have been them, in our respective times. It does not mean that I think we – the Germans – are likely to ever become Nazis again. Germany is a profoundly different land now, its identity reshaped forever by cataclysmic events. But it is the potency of us, them, me, to have been part of such events that is the horror today.’ 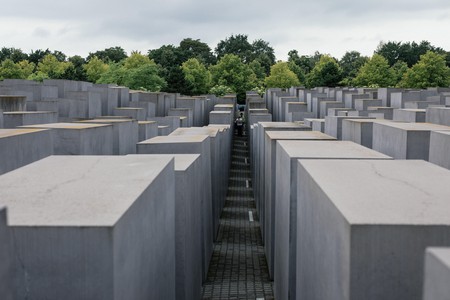 Of all human characteristics, change is ever the most constant. Germans no longer shy away from acknowledging the darkness in their past. Convinced of the Freudian idea that the repressed (or at least unspoken) will fester like a canker unless it is brought to light, Germany has subjected itself to national psychoanalysis. Past atrocities are unearthed and confessed, as a condition of healing, as if the psychic health of a society depends upon it. This courageous, humane and moving process is inspiring painters and authors at home and abroad, illuminating legends real and imagined, galvanizing again this volatile, ever-changing city… for a time. 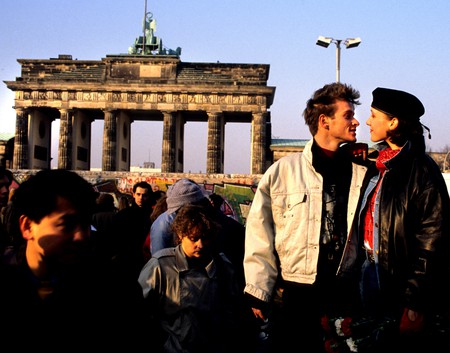 Rory MacLean introduces Oxygen’s Berlin title, which includes over 60 writers on the city. He is the author of Berlin: City of Imagination, Stalin’s Nose, Under the Dragon and many other books.