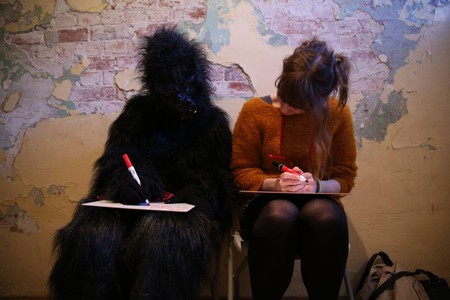 This month, we caught up with the Berlin-based artist behind the unique one-on-one performance This is Mine, What’s Yours? to discuss what made her decide to create a one-on-one performance piece. We cut right to the chase and delved into what makes this slightly subversive performance artist who she is. With a somewhat curious take on theater, she is breaking the mold, and we uncovered the nuances of this young theater maker’s unconventional manifestations.

Originally from the UK, Lauren now lives in Berlin, and this one-on-one performance marks her debut in the Berlin art world. This form of performance is completely unlike what most people will expect from the theater. A very different experience from sitting in the dark watching a play, it might not be everyone’s cup of tea. But for those who are interested in experiencing something a little different, it’s hard to be disappointed. We asked Lauren about her inspiration for the performance, her influences, the making of the show and found out a bit about what we can expect from her in the future. 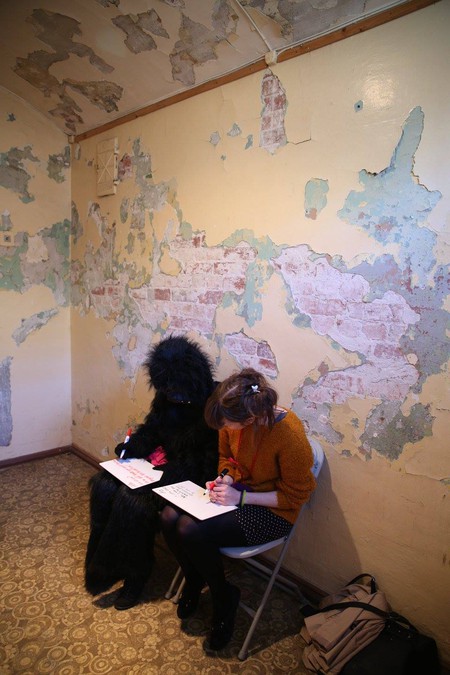 Where are you from originally, and what brings your to Berlin?

I’m originally from Sheffield, North England. After training at drama school in London, I worked there as a ​freelance ​performer and theater maker for a few years then made the decision to return to Sheffield to focus on developing my own work. After gaining experience within the independent scene in England, I was ready for a new challenge. Berlin became the obvious choice to relocate because of its thriving independent performing arts scene. There are many opportunities and support for international artists to become involved with venues such as English Theatre Berlin; it seemed the ideal place to relocate to develop as an artist.

Describe the performance in one sentence.

An intimate performance with a gorilla for one audience member at a time, there maybe sharing of secrets you have kept hidden for years, listening to a song that means more than you realize or dancing for the death of a loved one. 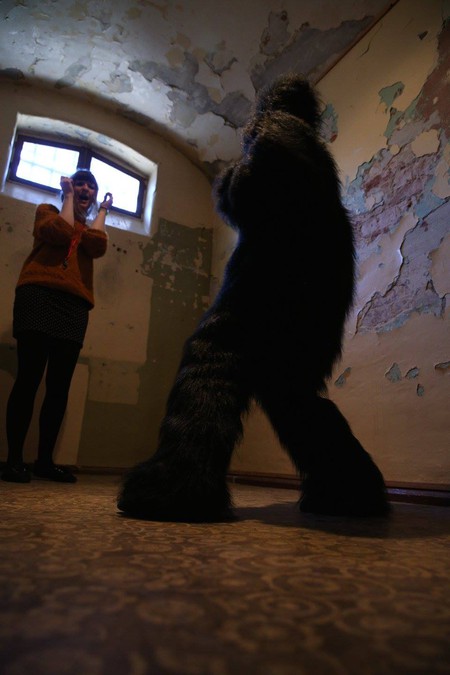 This is Mine, What’s Yours? is a one-on-one performance. What attracted you to this form?

I really enjoy the fact there is no boundary between audience and performer in a one-to-one performance. Given the fact that there are only two people present, it adds a certain dynamic, which creates a kind of intimacy not usually found in traditional theater. I like the fact that it can become a shared experience where the audience is co-creating the piece with me. My performances always follow a loose structure but offer choices to the audience which I respond to in the moment rather than pre-planning everything. This is something that excites me as artist and allows a different type of relationship to emerge. I am keen to generate honesty and a real sense of caring with the audience. It matters that I treat them as an individual and not perform the exact same piece to everyone. The very nature of one-to-ones allows for everyday spaces to be transformed into performance spaces, which adds an element or risk and can enable people to go beyond their comfort zone.

What was your main inspiration for this performance?

My dad mainly. I have a strong desire to have honest conversations with people about things that really matter. I wanted to give people the opportunity and freedom to talk about difficult things that they usually keep secret. The use of the gorilla suit is crucial in order to break the ice through humor but also to mask myself to allow the audience to be themselves without needing to deal with who I am, which allows space for a deeper connection to occur.

Who/What are your biggest influences?

I find inspiration in many everyday things such as people-watching, I’m very nosy and love to find out random details that make each person unique such as their likes, dislikes, fears, dreams, etc. I also love to dance; there is something about it that makes me feel more alive. My main influences are companies like Gob Squad, Forced Entertainment and Frantic Assembly. I like the way they make work and do things differently. I am also a massive fan of performance artist Miranda July. I really love the way she sees life; she is unapologetically weird, which inspires me to keep making and developing my work. 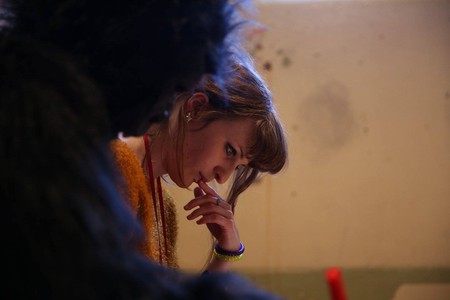 Has anything unexpected happened throughout the process? What has been your favorite moment?

It was first created in 2014 for a festival in Sheffield and has developed since then. In terms of anything unexpected happening, more so the general response which has been positive. It amazes me that people embrace the performance regardless of the location. It has now been shown in three different countries – the United Kingdom, Norway and Germany – and it is interesting to see how people respond in different places. My favorite moment is difficult to choose because everyone responds in a different way. One particular moment that stands out is with an audience member in Norway. The person became so involved when we were dancing together; for me, it felt like I was with an old friend and that we had been dancing together for years. Once you reach beyond natural defense mechanisms, connection becomes possible. For me, it’s often the people who walk in who I think will not like the performance who shock me the most by revealing something that either makes me cry or laugh. I love that you can’t judge a person reactions just by looking at them. I feel so grateful that people are so open and share their lives with me; this is exactly why I make my work. I guess the main thing the show highlights for me [is] that we are all the same; we all have fears, and we are doing the best we can.

What do you hope the audience will take away from this performance?

My main aim is for the audience to have felt something, something real, a genuine sense of connection with another person. Yes, it’s a performance, and I am a performer, but everything I say is honest, and I respond in the moment. It would not be morally okay for me to pretend to be something I’m not. It is important within my work to merge reality and performance to achieve something beyond what we normally experience in everyday life. Also, if I’m being greedy, I would like the conversation to have made the audience think. But the main thing is to have felt something.

What other projects do you have planned for the future, and where can we see more of your work?

I have just finished performing a new show, I’m not (t)here any more, which was commissioned by Wrought Festival in Sheffield, UK. It is a site-specific performance for one person at a time which uses Skype video call to connect the UK and Germany. The performance was live simultaneously in both countries; I was in performing in Berlin, and the audience were in Sheffield. The performance is about the meaning of ‘home’ and ‘identity,’ linking two places together both virtually and emotionally through the use of technology and the internet. The overall response was positive, and I have plans to develop this further to ultimately perform it in different venues.

I am currently developing a solo dance piece, My head is an Animal, about my mother and fears. Family seems to be a running theme in my work at the moment. It will premiere in Berlin in
summer 2016.

This is Mine. What’s Yours? is showing at Theaterhaus Berlin Mitte every Monday evening 7-10 pm until end of July and will return in September 2016. It will also be shown on Sunday June 5, 2016 from 2 pm as part of the Expat Expo | Immigrant Invasion: A Showcase of Wahlberliner at English Theatre Berlin International Performing Arts Center.