An Insider’s Guide to Shopping in Berlin 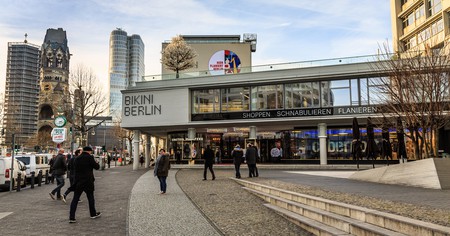 A dynamic cultural hub with a reputation for creativity, it’s no surprise that Berlin has an exceptional shopping scene. From designer labels and locally made artisan goods to bookshops and flea markets, the German capital is a must-visit for shopaholics.

With a shopping experience on offer to suit every taste and budget, Berlin is packed with opportunities for retail therapy – whether it’s designer labels at Kurfürstendamm, buying vinyl at Nowkölln Flea Market or getting lost in literature at one of Berlin’s many bookshops. 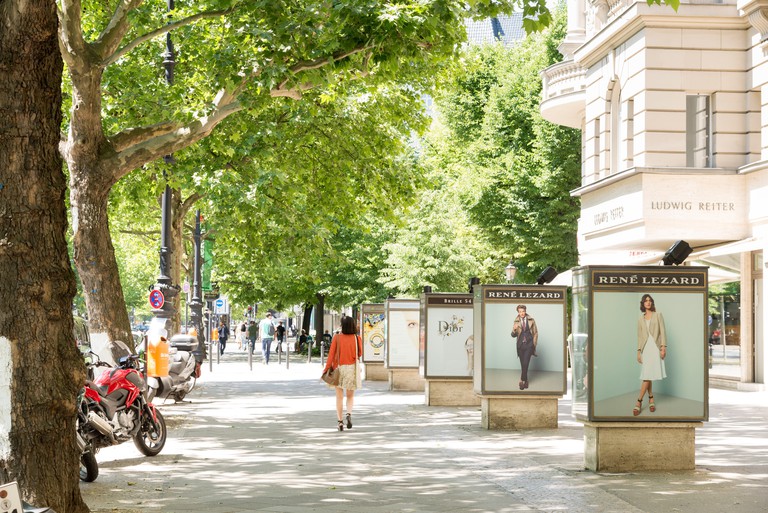 Arguably the most famous shopping street in the city, Kurfürstendamm (or “Ku’damm” as it’s known to residents) is often referred to as the Champs-Élysées of Berlin. During the Cold War, it served as the leading commercial street for the capitalist west, and today, it’s home to multiple designer stores, including Armani, Chanel and Yves Saint Laurent. Stroll along the shopping boulevard towards Wittenbergplatz, and you’ll come upon Berlin’s largest department store, KaDeWe. Here, there are six storeys of designer fashion, accessories and beauty, and when you need to refuel, head to the gourmet food department on the top floor. 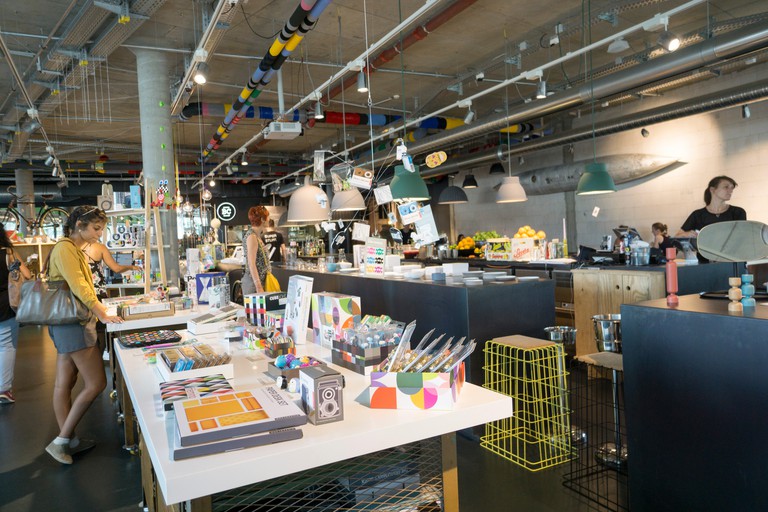 Bikini Berlin is a concept department store next to the zoo in West Berlin. Home to many pop-up shops and permanent stores, it houses both well-known designer brands and young, up-and-coming designers who are often showcasing their creations for the first time. Featured emerging designers include IND-Berlin, which focus on locally made, sustainable fashion. Each of its versatile garments can be worn in a number of different ways to suit the season and occasion. Additionally, one of the best features of the mall’s building is the freely accessible green rooftop terrace, the Bikini Berlin Shopping Garden.

Dating back to the 17th century, Gendarmenmarkt is one of Berlin’s most beautiful squares. Next to the two cathedrals and the magnificent concert hall sits The Corner Berlin – a luxury store that caters to both women and men. It boasts collections from an impressive number of designers, including Valentino, Acne Studios, Calvin Klein, Givenchy, Fendi, Isabel Marant and Stella McCartney.

Humana stores are spread throughout the city, but the Humana Kaufhaus in Friedrichshain is the biggest of the thrift chain. If you plan to go here, make sure you leave yourself enough time to explore all five floors. There’s always more than 30,000 items here, and each section is organised by garment type and colour. So if you’re looking for a red dress, you can head straight to the red dress section – it’s as simple as that. A special highlight is the vintage department on the top floor, where retro fans can find original clothing from the 1950s to the 1990s at reasonable prices.

You probably already guessed by the name, but the PicknWeight – Vintage Kilo Stores across Berlin are based on the concept of paying for your vintage hauls according to weight. It’s one of the city’s go-to providers for second-hand clothing, with a huge range of clothes and accessories from decades past. The company prides itself on its curation, always making sure to stock rare, one-of-a-kind pieces that will last.

Paul’s Boutique is a family of five vintage shops spread throughout the city. On Oderberger Straße 47 in Prenzlauer Berg, you’ll find the original store, Paul’s Boutique, stocked with vintage sneakers, leather jackets and collectable toys. Next door is Fundus, a shop that has become a popular go-to among local stylists – everything here is for rent, rather than for sale. A few doors down at Oderberger Straße 45, the family’s sister shop, GOO, sells vintage designer items from brands such as Dior, Chanel, Marc Jacobs and McQueen. At Torstraße 76 in Mitte, check out the aptly titled Torstraße shop where you’ll find vintage Dr Martens and rock T-shirts. Check the fifth store off your list by heading to Repeater in the trendy Neukölln district. This fun space was a former pharmacy built in the 1940s and abandoned since the late 1990s until Paul took over the lease in 2014. With a special focus on the ’90s, you’ll find a hand-picked selection of clothing, shoes and bags. 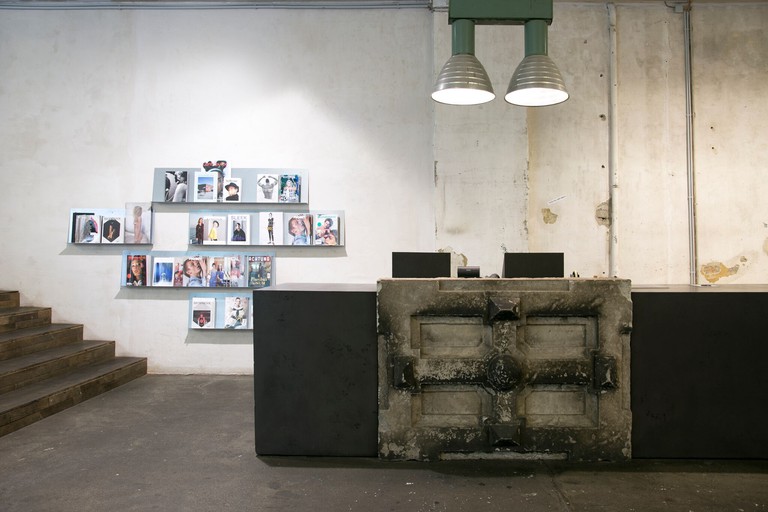 Courtesy of Voo Store
Located in the heart of Kreuzberg, within a 300-square-metre (3,229-square-foot) courtyard space on the ground floor of a former locksmith’s shop, Voo Store is a bit of a hidden gem. The team carefully curates a selection of progressive clothing and footwear from local and international designers. While its unique pieces often come with a high price tag, you can find a bargain in its new archive space, Compact Market. Here, you’ll find a selection of garments from its past collections – all with reduced prices. And when all that shopping leaves you exhausted, grab a coffee at Voo Store’s in-house café, Companion Coffee.

Run by two creative immigrants, Studio183 began as an experimental pop-up shop in 2016. Today, it has evolved into a concept boutique, selling a selection of fashion goods from young and established Berlin-based and international designers and artists. With two locations in both East and West Berlin, the interior is minimal and understated, leaving the pieces to speak for themselves. Each piece has a unique story behind it, making a trip to Studio183 just like visiting an art gallery. Check out the store’s first in-house “Geld” collection in collaboration with designer Veronika Hopponen. Many of the playful pieces are selected vintage items that have been dyed, cut and screen-printed with playful illustrations.

Shop, Store
Facebook
Email
Twitter
Pinterest
Copy link
Share
Before opening his first store in 2003, Andreas Murkudis spent 15 years directing Berlin’s Museum of Things. He established his second, current store in 2011, located in the former printing workshop of the Tagesspiegel newspaper on Potsdamer Straße. Murkudis doesn’t follow trends; instead, his selection of fashion, accessories and homeware is based on his fundamental belief in clean aesthetics and quality that lasts. You could spend hours exploring the store, but when you’re done, there’s a variety of art galleries just next door. At Blain|Southern, you can visit the space’s ever-changing collection of international contemporary art, while Galerie Thomas Fischer is known for its rotating photography exhibitions.

Get lost in bookshops 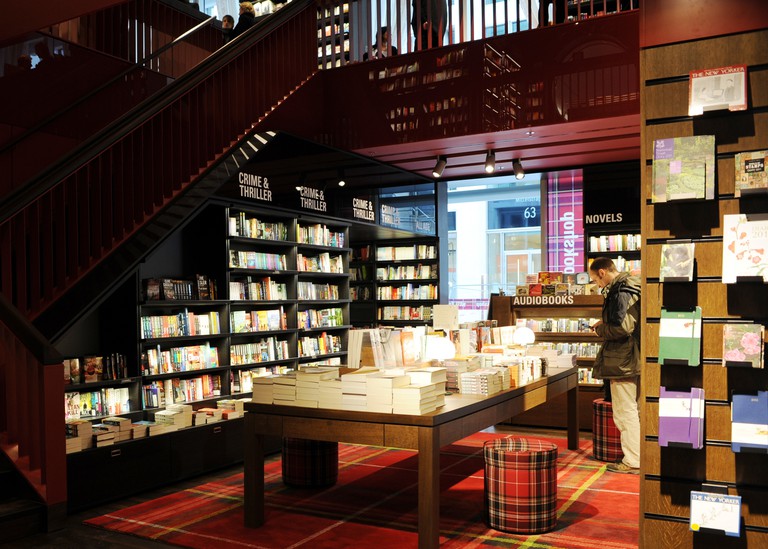 This multi-storey bookstore is the ultimate playground for literature lovers. Located in the popular shopping area of Friedrichstraße, it’s home to a 300sqm (3,229sq ft), two-storey English bookshop. From novels and non-fiction to poetry and children’s books, you can find pretty much any publication that’s on your reading list here. 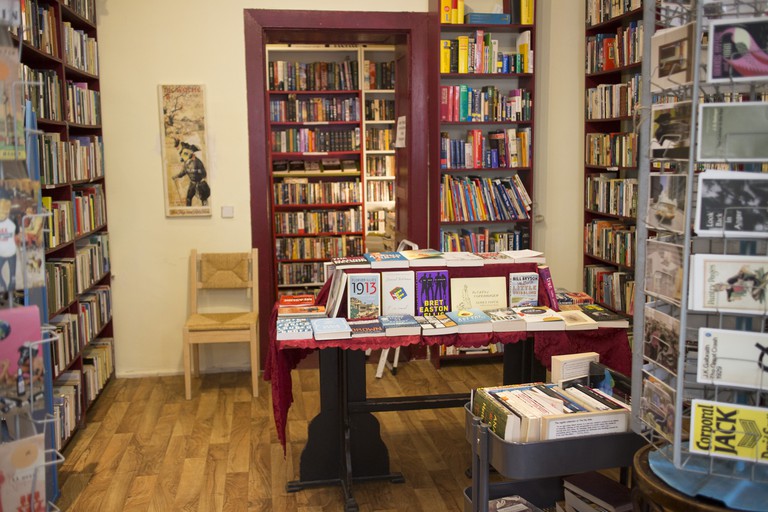 Curious Fox | Courtesy of Curious Fox
Curious Fox is the place to visit when you’re on the hunt for new and used English-language fiction. The Neukölln-based store has been catering to the English-speaking community for over 10 years and offers a huge library of literature. They even have Irish-language books thanks to the Ireland-born owner, Dave Gordon. The space also holds a popular quiz night on the third Tuesday of every month. Participants are encouraged to bring a buzzer (or something that makes a loud noise) for the rapid-fire round. They also have a bring-your-own-vinyl evening called “Guinness, Books & Records”.

Bookstore
Facebook
Email
Twitter
Pinterest
Copy link
Share
Located on Auguststraße in Mitte, do you read me?! is more than just a bookstore. Along with countless magazines and books from around the world, the cultural space also hosts lectures, book signings and exhibitions. While you’re in the area, check out the surrounding art galleries and stop for a coffee at THE BARN, an independent coffee chain that sources its beans from sustainable coffee growers.

Bookstore, Store
Facebook
Email
Twitter
Pinterest
Copy link
Share
Coffee, books and bagels – what more could you need? Shakespeare and Sons first opened in 2002 in a former brothel in Prague’s Vrsovice neighbourhood before relocating to the Malá Strana district to accommodate the ever-growing book collection. In 2011, it opened a second branch in Prenzlauer Berg, Berlin, and in 2014, it moved to Friedrichshain’s infamous “party street”, Warschauer Straße. Inside the quiet oasis, you can escape the city chaos, browse a large selection of English books and take a break at the in-house café.

If you’re visiting Berlin during the warmer months, a trip to Mauerpark on a Sunday is a must. The large flea market boasts many fashion, music, art and food stalls. Look out for the huge antique section where you’ll find all sorts of vintage design objects and bric-a-brac, from typewriters to old family photo albums. The surrounding park area provides endless entertainment too. You can walk along the path where the Berlin Wall once stood, stop and watch the many street performers and musicians, and if you’re feeling brave, join the famous Bearpit Karaoke – a giant outdoor amphitheatre where you can perform in front of hundreds of spectators, or just sit and enjoy the show.

A century ago, women used to sell their wares under the old linden trees here, and today, over 120 antique dealers gather every Sunday to find homes for their furniture, art, design items and books. This historical market just outside Ostbahnhof station is perfect for treasure hunters and avid collectors on the lookout for something special. Other than larger items like vintage furniture, expect to find jewellery, stamps, coins, postcards and more.

Situated next to the idyllic Landwehr Canal, the Nowkoelln Flea Market opens its stalls every Sunday. Here, can you shop second-hand clothing, rummage through records and buy locally made crafts and jewellery. There’s often live music and plenty of food stalls selling home-made cakes and more. 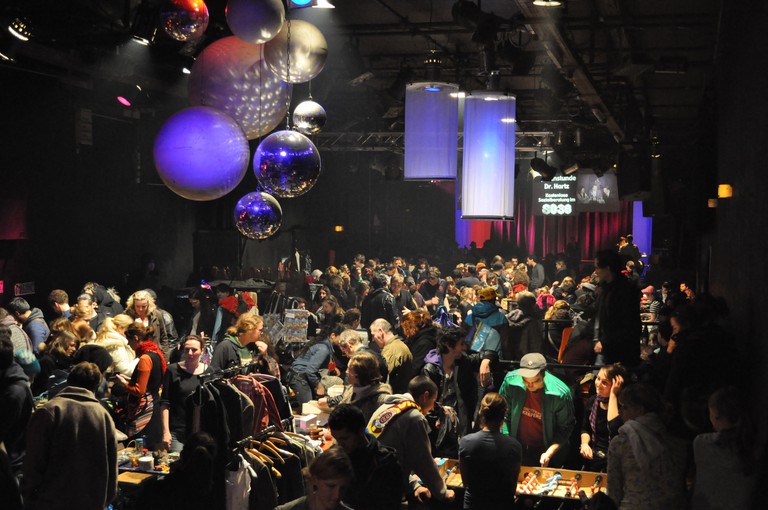 It’s often said that the early bird catches the worm (or the shopping deals in this case), but if you’re more of a night owl, perhaps the flea market at SO36 is more your style. Once a month, the legendary club transforms into a market hall full of vintage clothes, CDs, records, art and much more. It’s open from 8pm to midnight, but go early to beat the crowds.